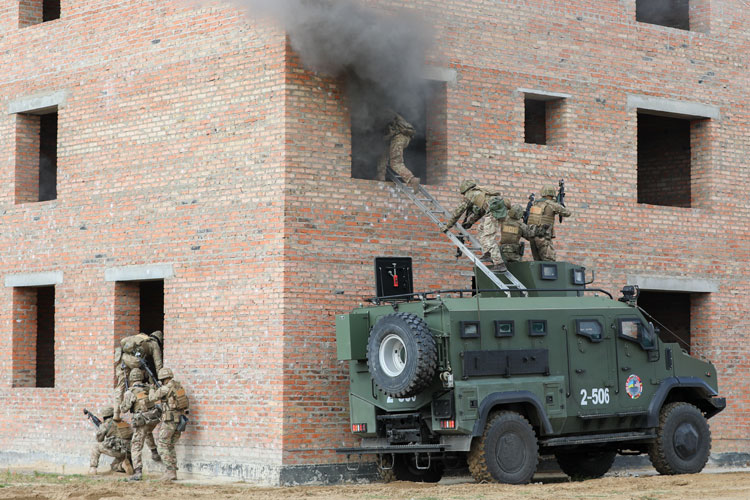 Soldiers from the Armed Forces of Ukraine conduct building to room clearing as a demonstration for RAPID TRIDENT 2019 [US Army: Sgt Justin Navin]

Around 3,700 service members from 14 NATO Allied and partner nations participated in exercise RAPID TRIDENT 2019 in Ukraine this September.

RAPID TRIDENT is an annual, multinational exercise organised by Ukraine and the United States. Around 3,700 service members from 14 NATO Allied and partner nations participated. RAPID TRIDENT is an exercise that contributes to Ukraine’s continued defence modernisation and US/NATO standardisation, which enables Ukrainian cooperation in regional security efforts.

This year, exercise RAPID TRIDENT took place from 13 to 28 September, near Yavoriv, Ukraine. On Friday 20th at a Distinguished Visitors Day, to which the media were also invited, a dynamic display by Ukrainian Special Operations (КОРД, in MultiCam uniforms) and National Guard (Olive Green uniforms) personnel formed one of the highlights. The accompanying video clip of this part of the day has just been released NATO Multimedia.

Footnote: JOINT-FORCES.com was invited to the RT19 DV Day but regrettably a prior commitment in Central Spain on the 19th, combined with awkward flight timings, meant we could not get to Yavoriv early enough the next day to attend. We did, however, join the exercise a few days later and plan to update readers in detail in due course.