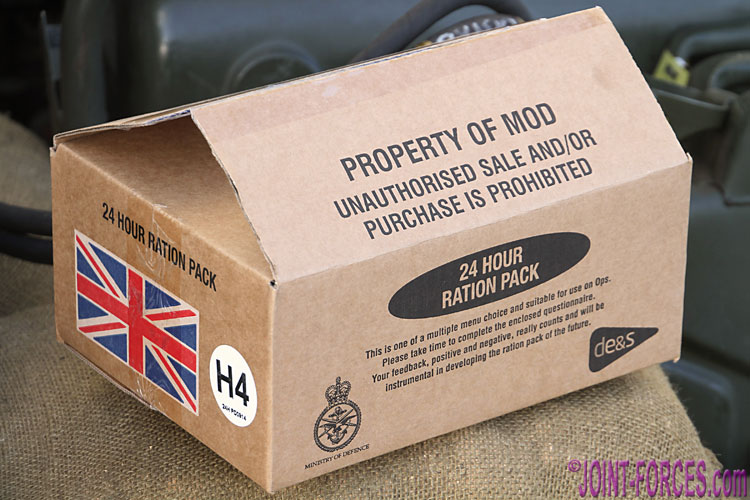 In this feature we look back at two UK 24-hour Operational Ration Packs, including one Halal, issued to troops on exercises in the UK and Spain in 2015, writes Bob Morrison.

The bulk of this article was first penned in late 2015 for publication in the January 2016 issue of the now defunct COMBAT & SURVIVAL Magazine. This rework continues a sequence of features showing the evolution of mainstream UK rations packs from the start of combat operations in Afghanistan, and then Iraq, through to the present day 24-Hour and Individual Meal versions.

Three years on from when we previously looked at the UK 24-hour Ration Pack (in November 2012) Carl Schulze and I reckoned it was probably time for us to open up a then current issue sample so he ‘proffed’ a spare carton while covering Exercise EAGLES AMARANTE ’15 in Norfolk in October. Then when I was out in Spain the following month covering TRIDENT JUNCTURE ’15 (TRJE15) I asked the QM at the 4 [UK] Brigade Support Group if we could open one of the specialist Halal menus to photograph it for comparison; I could not, however, take that pack away as I could effectively have been depriving one of the Muslim troops on the exercise of a day’s worth of meals ordered for their specific dietary needs.

Before looking at the Halal ration let us first look inside the standard 2015 issue (Packing Date 11/14) Menu 2 carton, which typically would be issued to the majority of troops deployed on operations or participating in field training exercises following drawdown from Op HERRICK in Helmand Province. There was actually not much difference between this and the example (Menu 13) we focussed on in FR13 but it did look as if there were less of the sweet snacks deemed necessary for troops operationally deployed on the combat mission in Afghanistan.

While in Chinchilla on TRJE15 I checked a standard rations Box A menu list (i.e. menus 1 to 10 out of 20) to confirm this change and noted jams, a component of almost every British ration pack I had eaten over the previous quarter century, were almost non-existent. The familiar foil-wrapped block of Biscuits Brown was still there, but our carton contained peanut butter rather than squeezy sachets of fruit preserve to make them more palatable; rations evolve to suit the taste buds of the soldier. As per 2012, a squeezable pouch of fruit purée was included and a sachet of commercial brand nuts, this time vacuum-packed honey roasted peanuts, replaced the tropical fruit and nut mix.

The retort pouches in Menu 2 were All Day Breakfast, Leak & Potato Soup, Lamb & Chick Pea Tagine and Ginger Pudding in Ginger Sauce; to be frank, although I like tagine and cook my own quite often, I was not impressed by the processed lamb in this main course. I also found the Ginger Pudding, which reminded me of my school dinners, to be a bit chewy but it tasted okay despite its texture. MoD actively sought end-user feedback by including a feedback form in every carton, and to encourage a good response rate it ran twice yearly prize draws, each worth £400 in total to three winners, so if sufficient people grumbled about a menu item or items this should theoretically have been picked up and dealt with.

Turning now to the Halal ration pack, this is one of the special dietary options provided for the 21st Century UK Forces soldier; others being Vegetarian, Sikh/Hindu and Kosher, the last two which we will look at in FR15 and FR16. Just like the standard rations, the Halal menus were packed ten to each outer carton, though the numbers 1 to 10 were prefixed with an H to identify them and there were only ten variations. Naturally there was no pork in the H-menus, so those breakfast retort pouches which had sausages as part of the meal had the veggie equivalent. Seven of the ten main meal primary retort pouches had chicken as the primary constituent, but there were steak, chilli con carne and pasta mains too. Incidentally, an officer acquaintance involved with selection of Kosher ration pack components tells me that it is acceptable on religious grounds for Jewish soldiers to eat Halal meals and for Muslim soldiers to eat Kosher.

Although in 2015 the ten Halal menus had a number of different Breakfast and Main Meal retort pouch dishes from the standard ration packs, secondary food items were mostly quite similar and the common components items were identical. Menu H4 included: Mushroom Omelette, Halal Chicken With Dal, Tuna Chilli Pasta, and Rice Pudding. The selection of cold drink and hot chocolate powder sachets was the same, as were the coffee sachets and teabags plus sugar and whitener sachets, and every carton contained water purification tablets, matches, tissues, wet wipes, and chewing gum etc. plus a reusable polythene bag. However a squeezy preserve sachet, rather than peanut butter, was included in H4.

Next up we will look at a Sikh/Hindu ration packed in 2015 and a Kosher ration packed the previous year, before coming a bit more up to date with a still current 24-hour ORP packed in 2017 and then one of the new Single Meal Rations. All packs had Wipes, Gum, Windproof Matches, Sterilising Tablets and a resealable bag for rubbish [© BM]