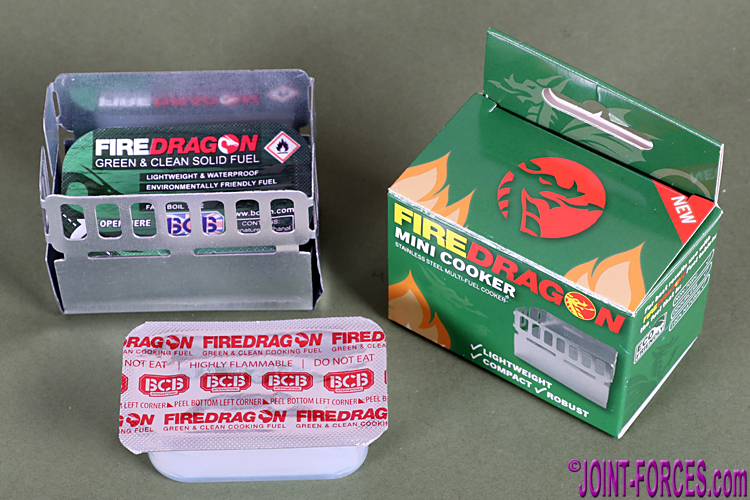 This miniaturised field cooker designed by BCB International for use with FireDragon mini fuel pods was conceived for a specific military requirement, writes Bob Morrison.

Heating rations in extreme cold conditions, such as encountered in the Arctic Circle for example, poses some unique problems of which low initial water temperature is but one.

Unlike in temperate theatres, soldiers in the Arctic Circle are less likely to have the chance to heat meals outside and as conventional hexamine fuel tablets gives off toxic fumes when burning it is not feasible to use these in confined spaces such as snow holes, igloos or tents. Water-activated Flameless Ration Heaters (FRH), if used carefully, can be used in more confined spaces but unfortunately they do not, as yet, have sufficient punch to cope with an extreme low temperature start and still bring the meal up to the required temperature. Additionally, because the chemicals which generate the heat in the FRH are dangerous the pouches are not safe to use for boiling drinking water. To compound matters even further, air transportation of most conventional fuels used for individual ration heating is prohibited and sea transportation of water-activated chemical heating agents poses further hazards, so both military and industry boffins have been looking long and hard at safer yet economic solutions to the problems of heating meals in the field.

Methanol-based FireDragon fuel tablets, and the associated gel fuel, are less problematic to transport but more importantly they do not pose the same health risks as hexamine, which is made from formaldehyde and ammonia. This is why the UK MoD decided in 2015 to move across to the new Welsh-produced fuel for heating individual rations. First operationally deployed by conventional British Forces in 2017, on Op CABRIT, FireDragon is gradually being picked up by other armies and even Natick Labs (the US Army Natick Soldier Research, Development and Engineering Center) has been seriously trialling both the fuel and associated field cooker systems. The FireDragon Mini Cooker seen here is one solution proposed by BCB for a US Armed Forces requirement for a field cooker which can be issued inside the Meal Cold Weather version of the MRE, which forward deployed personnel on NATO’s vulnerable Northern Flank are issued, and one of our contacts working on a recent United Nations requirement for Patrol Rations tells us this new mini cooker and FireDragon fuel is also seen as having potential in this area.

As I have previously penned articles on FireDragon fuel for J-F (see below) I am not going to go over old ground here but will just comment on the functionality of the FireDragon Mini Cooker, which is now becoming available for civilian purchase through select outlets stocking the BCB Adventure range. Measuring just 70 x 50 x 40mm and weighing a mere 40g, the assembled cooker is designed to transport two standard 27g FireDragon fuel pods, but alternatively three of the newer 18g pods designed specifically for military survival kits will fit snugly inside. The cooker photographed here is the pre-assembled stainless steel version which is intended to be reusable, but flat examples manufactured from a different metal, which the soldier would need to fold themselves to use, have also been produced; our cooker looks a bit battered as one of the BCB team and myself were messing around with it at OTS to see how easy it is to reconfigure the shape to support larger mess tins and the like.

Last weekend I took the mini cooker and a couple of FireDragon pods with me when I went for a stroll along the beach on a stretch of the Jurassic Coast and used it to prepare my lunch on a warm and sunny, but very windy, July day. I used a standard 27g FireDragon pod, which ignited instantly with a booklet match from a ration pack despite the strong wind, and once lit I placed my BCB Crusader Cup with 500ml of water atop; note that I now have one of the original Crusader Cup Lids again as my ex-Para mate Steve, who runs Army Surplus Honiton, read about me being unable to find mine and presented me with one last time I popped in for a chinwag. Once the water reached a rolling boil I added 300ml to an ELENA freeze-dried Lunch Mix (Buckwheat Groat with Bolognese Sauce) from Polish rations suppliers KADAR, let it stand for the required 15 minutes, then poured it into my WILDO Camp-A-Box bowl for for the photo (I will return to both ELENA and WILDO in future articles).

Although the FireDragon Mini Cooker is tiny, it proved to be much more stable than I anticipated and I had no trouble perching my Crusader Cup on top of it. As you can probably see from the photos, I set the cooker in a sandy hollow in the rocks so that I had a reasonably flat area to stand it on but this was by no means a level solid surface. However the combination of cooker and cup proved solid enough. A strong wind was blowing onshore but the design of the cooker ensured a good burn of the fuel tablet and it only took about six minutes to achieve a decent rolling boil, as evidenced by the condensation droplets on the clear lid.

As the Fire Dragon Mini Cooker is considerably more compact than even the UK MoD issue BCB Folding Cooker, there is little weight or space penalty in carrying one as a back-up. If, like me, you have the old Hexy Pouches from British Tactical attached to your daysack, two mini cookers each holding two FireDragon pods plus two additional 27g pods underneath will snugly fit inside a single pouch meaning you can have both a brew / wet and a meal heating at the same time if you use both your cup and mess tin for heating water.