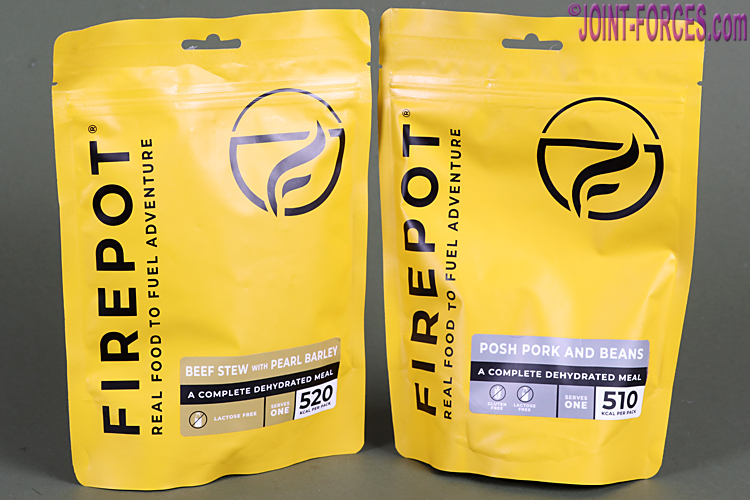 FIREPOT dehydrated expedition rations were one of the new, to me at least, ranges on display at this year’s Outdoor Trade Show (OTS 2019) in Manchester, writes Bob Morrison.

When I first spotted these meal pouches at OTS 2019 I presumed them to be just another freeze-dried food option, but a closer look shows that the Dorset-based producer uses high speed air flow dehydration rather than extreme low temperature lyophilisation (cryodesiccation) to extend the shelf life of the food.

Mankind has been dehydrating food for thousands of years, just think of raisins or air-dried ham, and FIREPOT just do pretty much the same thing but using modern methods rather than waiting for Mother Nature to do her thing. Unlike some freeze-dried meal manufacturers, who combine dried individual ingredients in the pack and let the reconstitution of the mix turn it into a dish, the guys at FIREPOT actually make the complete meal and then dehydrate it meaning it looks and tastes more like the original when rehydrated; indeed the dehydrated pouch contents even look very different from usually powdery contents of packs produced by lyophilisation.

In my opinion, the texture of the two FIREPOT meals I tried was much better than freeze-dried and I did not encounter any gritty bits which had not properly reconstituted; something which can sometimes be a problem with freeze-dried pouch contents if you do not ensure the very bottom of the pouch is very quickly stirred after the water is added. Dehydrated meals are less powdery than freeze-dried, but to properly rehydrate they take much longer standing time – fifteen minutes rather than eight to ten – but I reckon the wait is worth it. Both meals I tried were non-vegetarian and my mouth tells me their claim that they use three times as much meat in their non-vegan pouches than the market leaders in the expedition foods arena stands up well. Note for our mates at East-West Trading, before they ask the question via FB, half of the current FIREPOT range of ten meals are suitable for those of the vegan persuasion.

There are two types of FIREPOT pouches available – the standard tough and waterproof plastic type suitable for expeditions where the elements are likely to be against you, in a distinctive dark yellow pack, and a slightly less durable but eco-friendly compostable version, in a dark beige pack which looks similar in colour to cardboard cartons. If you do not have composting facilities FIREPOT say: “While throwing your compostable pouch into common household waste means it will end up in landfill, it will still compost down to nothing in less than a year. This is compared to plastic which can take over 500 years to do the same.”

Just like preparing a freeze-dried meal, one needs to tear off the top of the packet, pour in a set amount of boiling water, stir the contents well, reseal the pouch using the zip-lock strip at the top, stand for a set period, then stir once again before eating. Water level markers are printed on the outside face, but for taste tests I usually use a measuring jug to ensure I get it right. The Beef Stew With Pearl Barley requires 280ml, and this was precisely what I added, but when the results were decanted into a bowl for the photograph there was much less gravy than I expected. Consequently, when preparing the Posh Pork And Beans for brunch next day I added a little more than the recommended 350ml and as a result I ended up with too much gravy. My conclusion is that the Pork & Beans is actually intended to be a drier dish. Both packs generate a fraction over 500kcal.

Now the important bit. What do the meals taste like? First and foremost, these do not taste anything like standard freeze-dried dishes. The simplest description I can give is that in both taste and texture they are like home-made and both dishes I tried, made from either minced beef or minced pork, were not too different from my own version of a mince stew; the potato component, however, appears waffle-like and I presume this is a requirement of the dehydration process. Neither of this pair were spicy, but I suspect both their veggie / vegan Chilli Non Carne And Rice and their more conventional Chilli Con Carne And Rice would tickle my taste buds so next time I get the chance I plan to try one of these.

We were given our review samples on the VANGO (AMG Group) stand at OTS 2019, as this Scottish company is distributing FIREPOT to the retail trade, but meals can be individually purchased direct from the FirepotFood.com website. They also produce Mini Taster Packs, containing either meat or vegan dishes, of four half-portion pouches which I reckon could make an ideal lightweight ‘just in case’ fall-back to carry in grab bag or daysack.