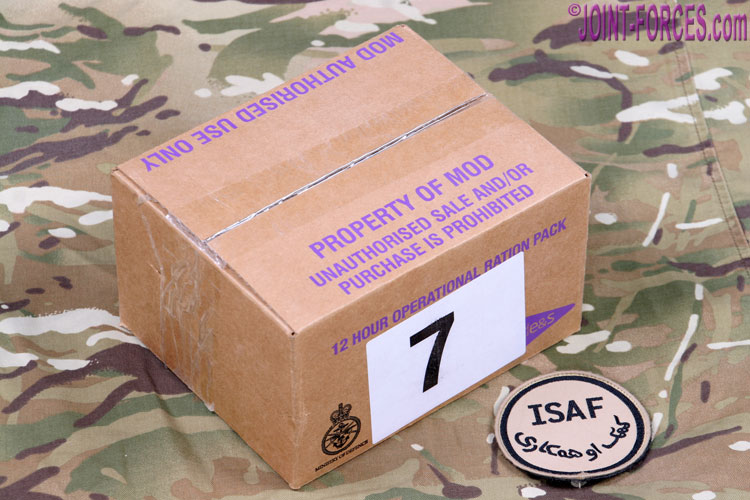 In this feature we look back at the UK 12-Hour Operational Ration Pack (ORP) first issued in early 2011 to troops serving on Operation HERRICK XIII, writes Bob Morrison.

The bulk of this article was first penned in June 2011 for publication in the August 2011 issue of the now defunct COMBAT & SURVIVAL Magazine. It is our intention for it to form part of a sequence of features showing the evolution of mainstream UK rations packs from the start of combat operations in Afghanistan, and then Iraq, through to the present day 24-Hour and Individual Meal versions.

As mentioned before, British combat rations have long been regarded as superior to those issued by many other NATO nations, with even some US troops being keen to swap their MREs for British ORPs in one of those rare situations where something of Brit issue was and is considered to be better than Yank issue, though admittedly these days the two are drawing closer as one side picks up from the other. In 2007 the Americans issued their First Strike Ration to improve tactical mobility and to meet the manoeuvre sustainment needs of the warfighter during first to fight and high intensity conflicts, and in 2011 Britain followed that concept by issuing the 12 Hour Operational Ration Pack illustrated here.

On 11th February 2011 the UK MoD announced: “Troops fighting on the frontline are enjoying new and improved operational ration packs, including a lightweight version and a host of new menus. Designed for troops on patrols lasting twelve hours or less, the new lightweight ration pack weighs less than one kilogramme. It includes food that can be easily carried in webbing pouches and pockets and eaten quickly whilst on operations.”

This new ration pack was actually on issue to some frontline troops in January ’11 and when colleague Carl Schulze was embedded with British Forces in Helmand in the February he tried to track them down without success. However on a subsequent assignment in late spring he managed to proff one, with official blessing, and sent it straight back to the UK courtesy of the BFPO system for detailed evaluation.

Produced by Purple Foodservice Solutions Ltd, a consortium comprising three companies (DBC Foodservice, Supreme Foodservice and Vestey Foods UK) created specifically to tender for the long-running UK MoD Worldwide Food Supply Contract awarded in June 2006, these new rations were effectively a cut down version of the 24 Hour ORP tailored specifically for combat troops on the move. To ensure each soldier received the 4000 calories needed each day for sustenance on combat operations these latest meals, which featured new selections of food taken from the Multi-Climate Ration packs and the ten-man Operational Ration Pack versions used by military chefs feeding troops in more remote tactical bases, were intended to be eaten in addition to a full breakfast before the mission and an evening meal afterwards.

According to a spreadsheet issued to to the author by UK MoD DE&S (Defence Equipment & Support) at the end of June 2011 there were at that time nine standard menus on issue, though the menu sheet was only indicative and could vary from pack to pack as the team attempted to increase variety. The variant we examined, and ate, for this feature was Menu 7, with a BBE date of December 2012 though some items were actually good through to early 2014.

Unlike the US First Strike Ration, which is bagged, the UK 12 Hour ORP was issued in a brown cardboard carton which measured roughly 190x150x110mm. The box printing was mostly in purple, though the MoD crest was in black and there was a black range card and bullseye on the base. The menu number was printed in black on a large white label on one side.

The 12 Hour ORP was intended to provide a light lunch, a main meal, snacks and drinks plus it also contained a minimal accessory pack. Everything could be eaten without preparation if necessary, though the main meal course would taste better if its retort pouch was warmed with the enclosed Flameless Ration Heater, activated by the addition of water. In this case the heater was the Action Meals brand produced in the US. As no cardboard outer was provided both the activated heater and the retort pouch needed to be slipped back inside the outer wrapper to ensure efficient heating; instructions were printed on the FRH.

Our Lunch item was the Italian Style Sausage Marinara Sandwich produced by Bridgford in the USA and was shelf-stable until October 2013 … though it only lasted seconds once I had gently warmed it in a pan of hot water and torn the retort pouch open. I didn’t need the heater, so stowed it for when I required it in the field. Three variants of these sandwiches, possibly best described as a cross between a toastie and a Ginsters slice and something imported from the popular US First Strike Rations, were provided in the UK ration packs with BBQ Beef and Marinara Soy being the other two.

I must confess that the Main Course of Beef Ravioli With Mushroom Sauce would not have been my preferred pick of the dozen options – Menus 1, 3 and 8 differ by containing one of two meals – but even though I am not a fan of mushrooms it was actually okay. Other main meal courses, most of which could be found in the 24 Hour ORP of that period, included Beef & Cassava and Chicken Arabbiata or Paella along with less exotic options like Meatballs & Pasta and Steak & Vegetable.

It was the wide variety of snacks that most troops on patrol would no doubt be most appreciative of, especially if they liked Beef Jerky and biscuits or oat bars. Eight of the nine menus contained a pack of commercial brand Beef Jerky, in either original marinated smoked beef or peppered beef flavours – the odd one out contained a Golden Oat Bar instead. Each menu also had a pack of five Fruity Oatie or Ginger Crunch or Chocolate Chip biscuits plus either a Fruit & Oat or Golden Oat snack bar. Five different types of commercial brand nut mix packs were provided for variety and for those with a sweet tooth there were three variations of individually wrapped boiled sweets.

On the drinks side, to keep weight down powder sachets were supplied rather than pre-mixed drinks and it was intended that these should be added to drinking water to both refresh the soldier and replenish minerals. Each menu had one of five flavours of Energy Drink powder, one of four flavours of Isotonic Drink powder and two sachets of fruit flavoured powders from a range of six. As it was considered unlikely that frontline troops on patrol or deliberate operations would have time to make a brew or wet, no teabags or coffee sachets were included.

Finally to the accessory pack, which was contained in a reusable plastic bag. This contained a spoon for eating the Main Meal, dental chewing gum in one of three flavours, four antiseptic wipes for hand cleaning, a pack of ten three-ply tissues and a strip of six water sterilisation tablets. There was also an Evaluation of Acceptability questionnaire as the DE&S team really did want to know what the users thought and how they felt improvements might be made based on operational use.

My verdict on the British 12 Hour Operational Ration Pack was that it hit the mark and I polished off every last bit of it.