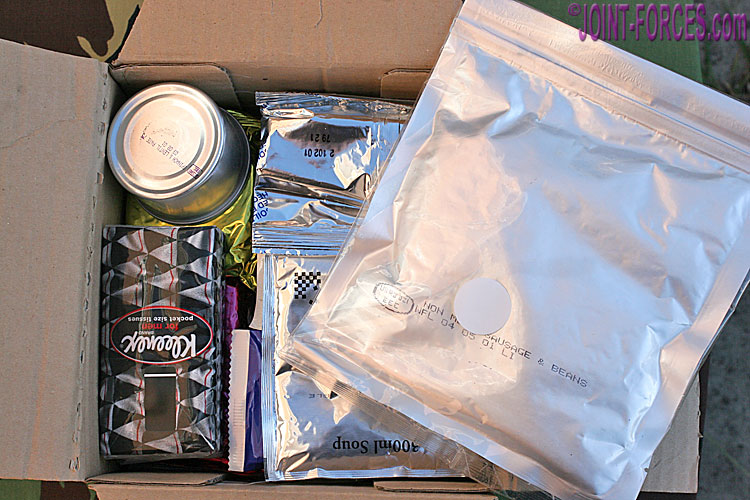 In this two-part rations feature we look back at the UK 24-Hour Operational Ration Pack (ORP) issued at the start of the 21st Century, writes Bob Morrison.

The nucleus of this article, first penned for the January 2013 issue of now defunct COMBAT & SURVIVAL Magazine and slightly edited, was prompted by a chat I had about rations and catering for several hundred troops in the field with the chef feeding the 1 MERCIAN battlegroup on the PASHTUN DAWN 17 pre-deployment on Salisbury Plain a few months earlier. Afterwards, while I was killing time talking about C&S features with some troops who had only a few years service under their belt but had been reading the magazine since their early teens, the topic of how British ration packs had evolved since I first started penning military features in the late eighties (before some of them were even born) came up and this started me thinking.

Both Operational Ration Packs featured here were packed in 2001, meaning they were of the type issued to UK Forces deployed to Afghanistan at the end of that year and through the spring and early summer of 2002, who were tasked to the hunt for Osama bin Laden in the Khost and Paktia Provinces of that troubled country, and probably also to UK Special Forces working alongside the Northern Alliance and US SOCOM in the struggle to restore a more democratic government than the Taliban. The Khost and Paktia missions by UK forces mostly involved the 45 Commando battlegroup deployed on Operation JACANA and its four derivative operations.

As can be seen from the photo of the base of one of the cartons, in 2001 the ORP was available in three basic types to cover General Purpose (GP), Cold Climate (CC) or Hot Climate (HC) field training or deployments; essentially CC had more freeze-dried meals because water to reconstitute was likely to be available and HC had more ready-to-eat meals as fresh water was likely to be at a premium. In total 23 different menus were available, of which seven were standard, nine were religious (Sikh/Hindu, Halal and Kosher), three were Vegetarian and four were lightweight Patrol versions.

In 2005 the Brigadier serving in the role of Director Defence Catering Group, who was double hatted as Director Logistics (Commodities), produced an unclassified ‘Feeding The Forces’ information pack which explained the role of his organisation and included basic details about the 24-hour (i.e. individual), four-man (mostly for armoured vehicle crews) and ten-man (i.e. for an infantry section) Operational Ration Packs. As the ORP system had not changed to any great extent since 2000, this document provided a succinct and accurate reference source when I was researching into the 2001 packs in late 2012.

According to the 2005 info pack the ORP is an individual ration for normal use in the field, issued for operational deployments throughout the world as the first stage of feeding the troops. Each ration was intended to feed one person for one day and had been designed to provide a balanced nutritional diet for continuous consumption for up to 15 days, but ideally no longer than 30 days due to nutritional qualities. Each ORP provided an average of 3800-4200 kcal and could be eaten hot or cold. Nutritional balance was 10% protein, no more than 35% fat and 55% carbohydrate. Packed in waterproof outer cardboard cartons the standard seven menus consisted of Breakfast and Main Meal (including a dessert) in flexible foil pouches, Snacks, Beverages and Sundries, including matches, tissues etc.

Whereas the Hot Climate variant of the ration pack, intended for arid and tropical environments, was at the bottom end of the calorific scale and contained more drinks, the Patrol variant was intentionally lighter, hence the use of freeze-dried meal pouches and it contained more calories to cope with both the cold and with the longer ranges the troops were likely to tab or yomp, but the downside to this was that it could realistically only be issued where there was the guaranteed ready availability of water or snow. In eastern Afghanistan, where British forces were primarily deployed in the early years of the mission, and particularly during the winter months, the Patrol variant had its uses but it was totally unsuitable for later operations in the southern provinces of Kandahar and Helmand where decent drinking water is at a premium.

The Vegetarian variants, along with the Religious variants, had more conventional boil-in-the bag type retort pouch meals, and could also be eaten cold without the need to reconstitute with water, so though slightly heavier were suitable for use in any environment. Approved by the Vegetarian Society they were, as the name suggests, intended for soldiers who do not eat meat but, just like the Religious meals, any soldier who found them palatable could eat them; and indeed some liked the additional variety that the three extra menu choices afforded.

Each ration pack, intended to sustain a combat soldier for 24 hours, was broken down into Breakfast (a single pouch) and Main Meal (usually two pouches with one being dessert) plus a range of simple, though mostly rather repetitious, snacks rather than a proper Lunch option. Our American colleagues, and those who used MREs or their equivalent, would normally be supplied three individual meal pouches per day and some of our NATO allies would normally be issued a 24-hour ration individually bagged into three separate meals.