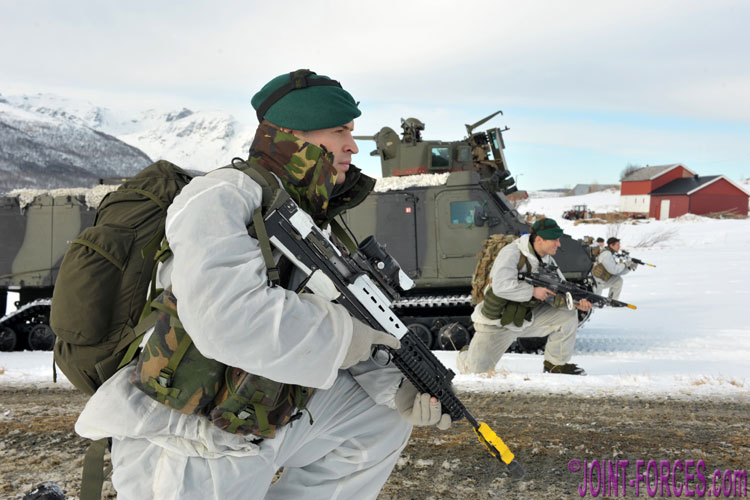 In this feature we look back at the UK Cold Climate Ration (CCR) as used by Royal Marines returning to Arctic Training in Norway in 2012, writes Bob Morrison.

The bulk of this article was first penned in the spring of 2012 for publication in the July 2012 issue of the now defunct COMBAT & SURVIVAL Magazine. This reworked article continues a sequence of features showing the evolution of mainstream UK rations packs from the start of combat operations in Afghanistan, and then Iraq, through to the present day 24-Hour and Individual Meal versions. 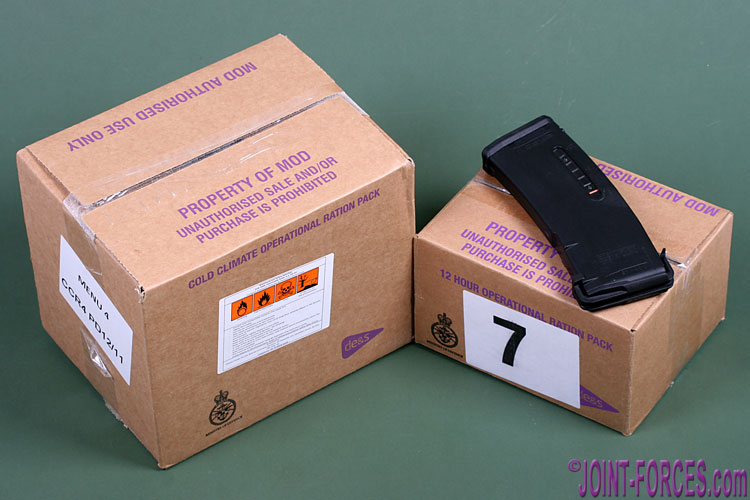 In 2012, with draw-down from Helmand looming fast, the focus on British military training for units not earmarked for the last Operation HERRICK roulements, and particularly those tasked to spearhead any out-of-area rapid reaction, was starting to turn away from the arid wastes of Afghanistan and returning to the more traditional scenarios. For 3 Commando Brigade, Britain’s Amphibious and Arctic specialists, this meant re-engagement on NATO Northern Flank exercises such as COLD RESPONSE, the Norwegian invitational exercise held in early spring most years. 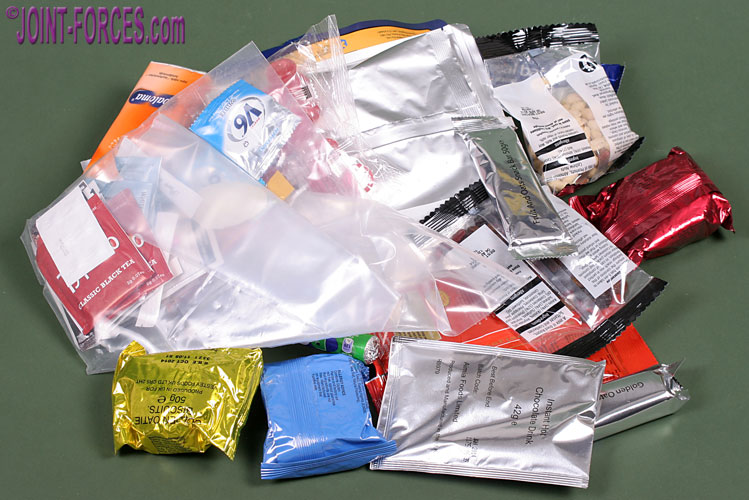 When working in desert or arid theatres like Afghanistan, and before that Iraq, the Operational Ration Packs (ORP) issued to frontline troops had to be configured differently from those issued in temperate environments, particularly as fresh water needed to be conserved for drinking rather than used for cooking plus the soldier needed to rehydrate much more. As a result, over preceding years we saw major advances in the types of menu and foodstuffs supplied in individual 24-hour, and later in 12-hour, ration packs to ensure that the soldier would have adequate nutrition which he or she not only would eat, but would want to eat, at a reduced weight burden while also conserving water. 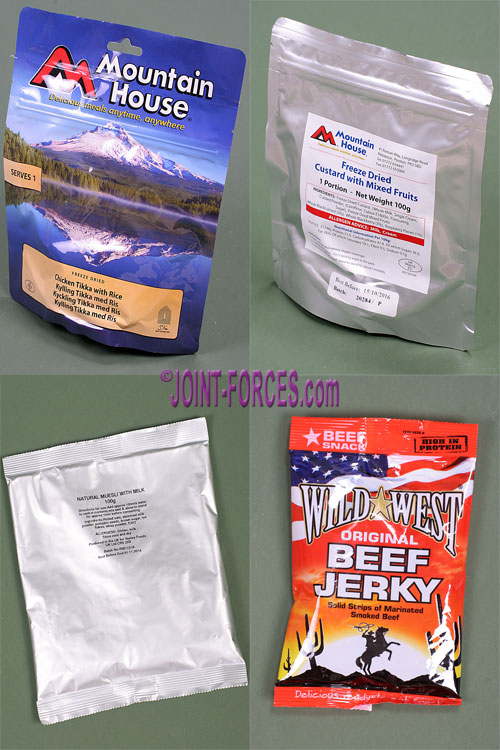 Soldiering in cold environments presents a different set of challenges to the menu planners, not least because the number of calories needed for maximum efficiency is about 50% higher for a fighting male than the 3600 kcal required for temperate theatre operations, but also because it is essential for both effectiveness and morale that hot meals are ingested when the ambient temperature is very low; in contrast, in a desert environment most of the time a hot meal will not be a necessity. On the plus side, normally water supplies will be relatively plentiful in cold climate operational areas, even if that water may be snow or ice and would need to be melted, so boil-in-the-bag retort pouches or even dehydrated main meals can be used to provide high calorific content at relatively low weight and bulk.

While covering Exercise COLD RESPONSE 2012 Carl Schulze was not only able to sample the then current cold theatre Operational Ration Pack, conceived by the Defence Equipment & Supply branch of the UK MoD, but was also given one for the guinea-pig (that’s another of my jobs) to examine and taste. Sometimes when I open a ration pack and see the contents my heart sinks a little, but in this case all was smiles. No compressed cardboard bread or yucky fish portions or packs of smegma-like cheese substitute in this one; just good tasty food … and loads of it. 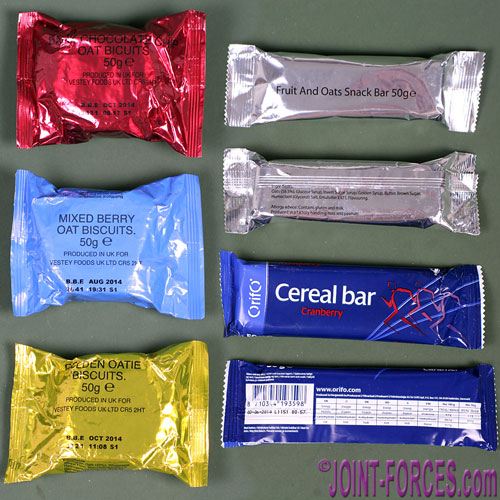 Quoting contemporary official sources, the British Cold Climate Ration (CCR) was: “developed for use above the snow line or the Arctic Circle where a lightweight, dehydrated and high-energy ration is required. This ration has a minimum of 5,500 Kcals and consists of dehydrated main meals, breakfasts and puddings supplemented by a range of snacks and drinks.”

The circa 2009 British Multi Climate Ration (MCR) pack as issued to most troops serving in Afghanistan who were not fed from a cookhouse (or galley if a Royal Marine) contained around 4000 calories to cater for the increased amount of foot patrols and the heavy weight of kit carried in that theatre by frontline troops. It also contained a lot of items intended for snacking on the move rather than more conventional main meal type options. For more on the Multi Climate Ration see FR11 ~ UK 24-Hour MCR.

So how do you cram another 1500 calories into a 24-hour ration pack without bumping up the weight and bulk, you may be thinking. The answer is to use dehydrated pouches for the main meal of the day, working on the assumption that plenty of water will be available in the sort of place this type of ration will be most needed, and then cram the cardboard carton full of the sort of sweet and sticky snacks that not only your mum would tell you were bad for you but the little devil on your left shoulder would tell you to eat. Opening the MCR is like walking into a tuck shop, and as I have a typical Glaswegian’s sweet tooth I had no problem consuming each and every morsel over the course of a couple of days. 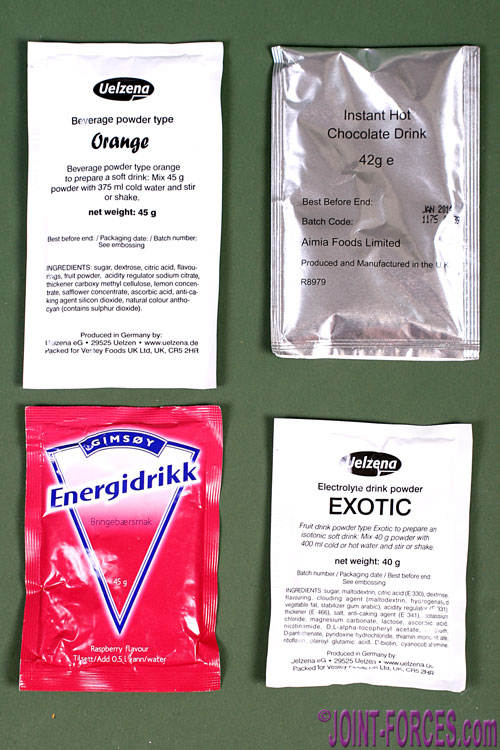 There are only two proper meals catered for in the roughly 230x180x180mm (9.5x7x7 inches) CCR carton; namely breakfast and evening meal. This makes particular sense for the Arctic theatre winter deployments where you are likely to be on the move throughout the short hours of daylight and then laying up in shelter during the long and cold hours of darkness. While moving you can snack to your hearts content to keep replenishing your energy levels and while at rest you will have time to prepare a more conventional meal, including converting snow to water to rehydrate meal pouches.

Carl opted for Menu 4 as our taste sample, probably because he knows I love a curry, and this meant dinner was Chicken Tikka & Rice followed by Mixed Fruit and Custard. The supplier of both these courses was Mountain House of Preston, a name anyone shopping in the better outdoor leisure and camping outlets would recognise, and indeed the curry came in their standard commercial packaging. All that was needed to reconstitute this tasty dish in its zip-locked sachet was the addition of 350ml of boiling water and a good stir at either end of the 8-9 minute standing period. 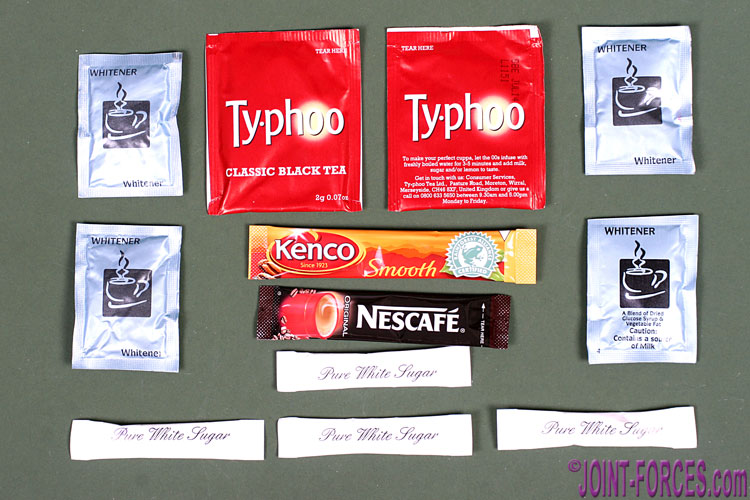 The Mountain House Custard & Mixed Fruit dessert, like the curry, was also freeze dried and required 250ml of boiling water to reconstitute, followed by a five minute stand. The consistency of this was very thick, meaning it spooned out easily, and the berry fruits were very tasty indeed. I could eat a shedload of this one too. Incidentally, don’t forget to remove the oxygen scavenger sachet before adding water to both pouches.

Breakfast was a 100ml sachet of muesli which required 100ml of water and a one minute stand to prepare it for eating. I must confess that I am not really into budgie food, much preferring hot porridge oats made with water and sprinkled with salt (the milk and sugar method is for Jessies) but the muesli was acceptable. 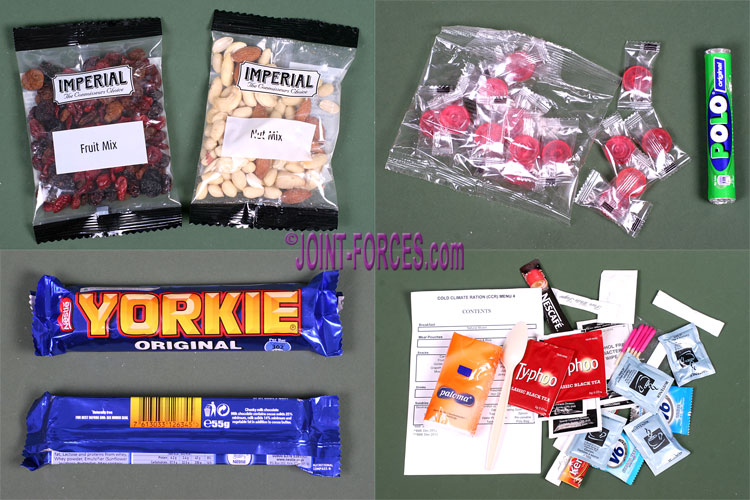 On the drinks side there were four individual sachets containing; Orange beverage powder; Raspberry energy drink powder; Exotic Fruits isotonic drink powder and; instant hot chocolate powder. Incidentally, several of these also feature in other NATO ration packs we have covered in this series. Inside the sundries pack were four more drinks in the form of two instant coffee sachets and two teabags.

Other bits & pieces in the resealable polythene bag containing the sundries kit included: 5x windproof matches & striker; 4x sachets whitener; 4x sachets sugar; 6x water purification tablets; 2x dental chewing gum; 4x wet wipes; small pack of soft tissues; a plastic spoon and; a second resealable polythene bag for waste. Printed on the underside of the carton there was also a simple range card and on the front there was a hazardous warning label, no doubt conceived by some seat-polishing Euro-bureaucrat, to help relieve the boredom for five minutes. Finally, on the back of the contents list was a short questionnaire and prize draw entry form to allow the end user to provide feedback to the Defence Fuel & Food Services Team at Abbey Wood. I was not eligible to enter, but if answering Question 3 I would advise them to change the type of nuts supplied as they were bland and boring; though as I had just spent a week munching through packs of superbly tasty mixed nuts in Jordan when I penned the original review in 2012 my palate might have been spoilt a bit.