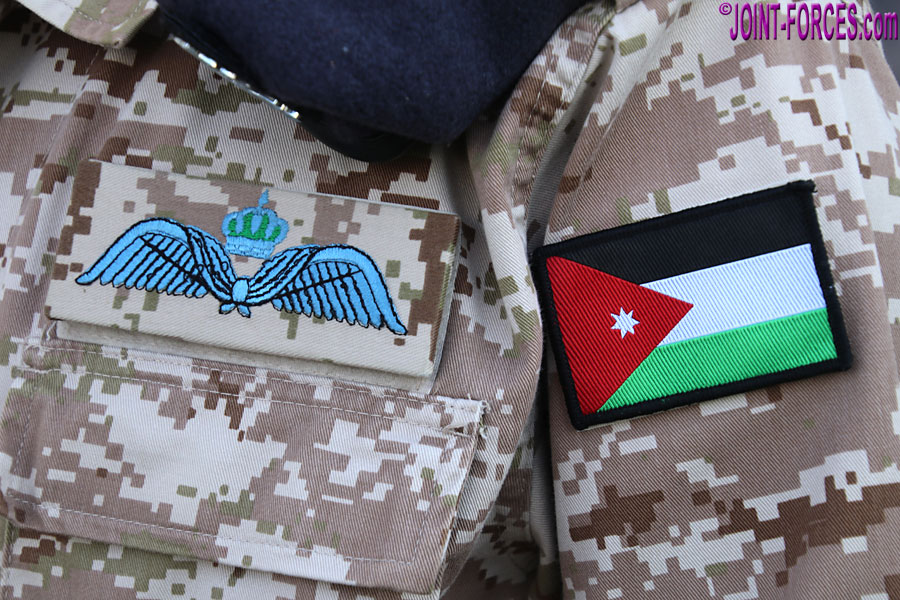 The Hashemite Kingdom of Jordan, following the examples of Canada and the United States, was one of the first nations to re-clothe its armed forces in the new digital / pixellated camouflage designs which were fashionable at the start of the first decade of the new millennium. For more on earlier Jordanian camo patterns see the links at the foot of this page.

At both SOFEX 2022, held in Aqaba at the beginning of November, and this year’s Annual Warrior Competition, which ran at KASOTC on the outskirts of Amman in early June, the bulk of Jordanian personnel who were wearing combat uniform (many wore service dress instead) belonged to Special Operations or Internal Security formations, rather than to the mainstream Army, so were clothed in their own specialist camouflage pattens. However there were a few personnel at SOFEX dressed in the new M2019 four-colour JAF (Jordanian Armed Forces) camo pattern, including some RJAF (Royal Jordanian Air Force) helicopter crew. None of the handful of enlisted Army personnel wearing the new uniform at the show who I tried to photograph had much grasp of English and my grasp of Arabic is minimal but, as was only to be expected, the RJAF officers in attendance were fluent in my native tongue and one of the Black Hawk pilots kindly allowed me to photograph his uniform.

Although this new Jordanian M2019 pattern, which has replaced KA2 Desert Digital, looks a little bit like the three-colour Arid Region (AR) version of the original late 1990s four-colour temperate digital / pixellated pattern Canadian Pattern or CADPAT, or even the more recent Royal Saudi Land Forces four-colour desert pattern, it does not appear to use the same shapes as either. The JAF M2019 colour palette is also rather different and although it does have similarities with the shades used for United Arab Emirates M16 pattern, the proportions are totally different with the UAE design being much more sparse. I find it really interesting how camo designers can produce essentially quite similar individual patterns to cater for regional terrain conditions while still managing to make them sufficiently different to create national identities, but I digress.

It might be that Jordanian Army personnel wearing M2019 camo uniforms spend more time both under the influence of direct sunlight and in very dusty conditions than aviators do, but at first I actually thought there might be two different versions of this new camo as the ‘khaki’ shade used in the Air Force uniforms seemed to my eyes to be much more verdant. However having later had the opportunity to photograph a brand new uniform on a mannequin on a Jordanian clothing supplier’s stand, albeit under artificial rather than natural light conditions, I am beginning to wonder if possibly the quality of the fabric that the camo is printed on might also be playing a part. Unfortunately I was not able to examine, far less photograph, soldier’s, pilot’s and mannequin’s uniforms side by side in the same light.

Finally, while I have not yet had the opportunity to see or photograph M2019 pattern in the field, I have been able to source some photos taken by American military photographers covering the US Army JOEP (Jordan Operational Engagement Program) out on the training areas and have included a few to try to show this camo in context. At present I have no firm plans to visit the Hashemite Kingdom again before mid-2024… but I’m working on it.

For more on other Jordanian camo patterns see:-

[images © Bob Morrison or courtesy of named US Army photographers]