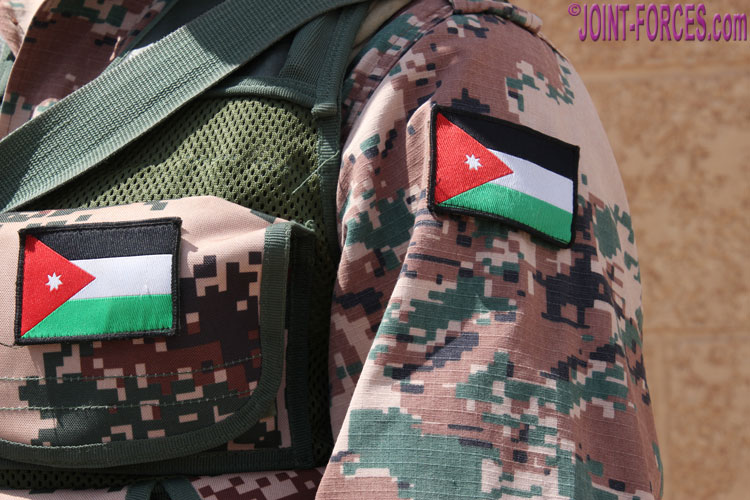 At the turn of the millennium a new generation of computer-designed military camouflage patterns, now usually referred to as Digital, came to prominence and the armed forces of the Hashemite Kingdom of Jordan were among the first to join this revolution.

In the May 2014 issue of the currently out-of-publication COMBAT & SURVIVAL Magazine, just after my return from an assignment to document United Nations Peacekeepers in Cyprus (UNFICYP) on their mission’s 50th Anniversary, we started running a series on camouflage uniform articles under the Kit & Camo banner. My initial thoughts were that this would be a mini-series of probably five parts, but the concept of presenting a lead image and four supporting views of the same soldier proved popular and I ended up penning about fifty articles in similar format. 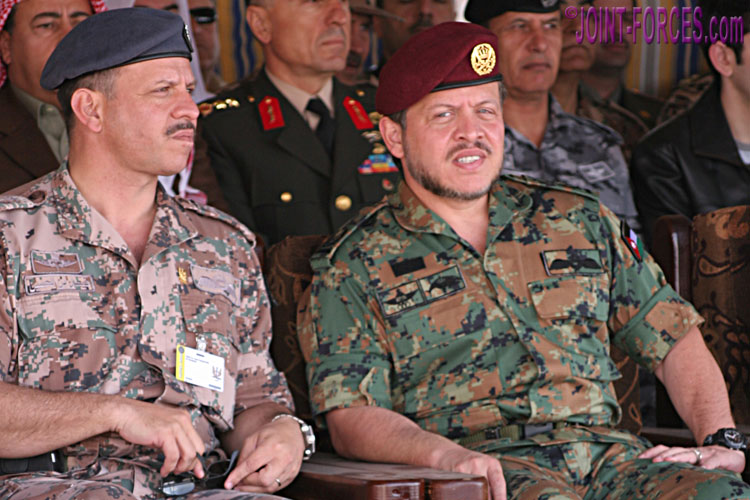 Way back in 2006, I had previously covered the newly introduced JAF (Jordanian Armed Forces) KA2 family of camouflage patterns, though not in the five-view format, so my recent assignments in Amman gave me a chance to take some fresh images and reprise the story. In Part 001 of the new Kit & Camo I am covering the standard KA2 Desert pattern worn by the bulk of the Jordanian Army and in part 002 we will look at the version worn by the Royal Guard using new photos, but the bulk of the following text comes from my original 2006 scribbles.

In 2002 inventor Guy Cramer, President of the Vancouver-based HyperStealth Biotechnology Corporation, began development of a set of new military camouflage patterns based on a mathematical formula known as fractals, and the following year was commissioned by King Abdullah II of Jordan to produce designs for that country’s armed forces and police. By 2004 the retired lieutenant colonel Timothy R. O’Neill, who developed digital camo for the US Army in the seventies and who is considered by some to be the world’s leading expert on military camouflage, had joined HyperStealth to further develop his research and combine it with Cramer’s fractal designs; it is claimed that the US Marine Corps digital camo, known as MARPAT, is based on O’Neill’s research, and that the earlier Canadian digital camo, known as CADPAT, was also based on his digital micropattern ideas. 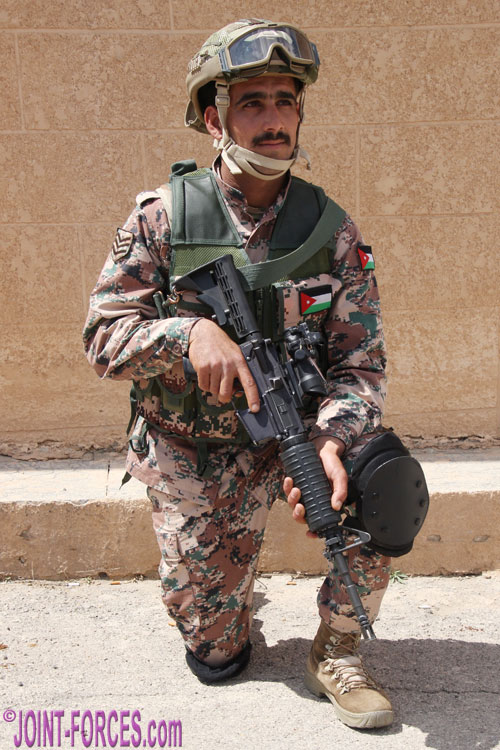 HyperStealth (a registered trademark) began manufacture of military clothing with the Cramer-O’Neill fractals patterns in 2005 and by mid-June had produced over a quarter of a million uniforms. Just under a year later, production totals were given as over half a million uniforms. The bulk of these – around 400,000 – were in what is known as the KA2 series, which by then was on widespread issue with Jordanian forces. In 2006 six different KA2 patterns had been declared as in service and I was able to photograph five of these on a visit to the Kingdom to cover SOFEX. By that stage HyperStealth claimed to have produced over a thousand different digital patterns, for vehicles and equipment as well as for uniform use, and ten nations were said to be reviewing their designs. The company even claimed that some of their patterns were being used for concealment training by both the US and British armies.

Among the thousand new digital designs, Cramer and O’Neill claimed to have produced over 150 conversions of traditional camo patterns to a pixellated format, along the lines of the Canadian CADPAT and US Marines MARPAT. These digitised patterns included progressions of Australian DCT (AUSCAM), British DPM, German Flecktarn, US Woodland and the many Russian schemes. Not content with converting modern camo designs, the team also turned their attention to successful World War II and follow-on camouflage patterns, and even produced five different variants of the distinctive Vietnam ‘tiger stripe’, of which a then new US Air Force design was believed to be one.

His Majesty King Abdullah II bin Al Hussein, who was commander of Jordan’s Special Operations Command when Crown Prince, is a career soldier with wide military experience. Commissioned as a Second Lieutenant in the Royal Hussars in 1981, after graduating the Royal Military Academy at Sandhurst, he served as a recce troop leader with the British Army of the Rhine, then served as 2IC of his country’s 40th Armoured Brigade before training as a pilot on Cobra ground attack helicopters, and attended Britain’s Royal Staff College before taking charge of a Special Operations Brigade, in 1994, and then assuming command of the enlarged JSOC in 1996. With such a varied hands-on military career, few other Heads of State could be in a better position than King Abdullah II to personally supervise the re-equipping of their country’s armed forces with completely new and state-of-the-art camouflage uniforms. 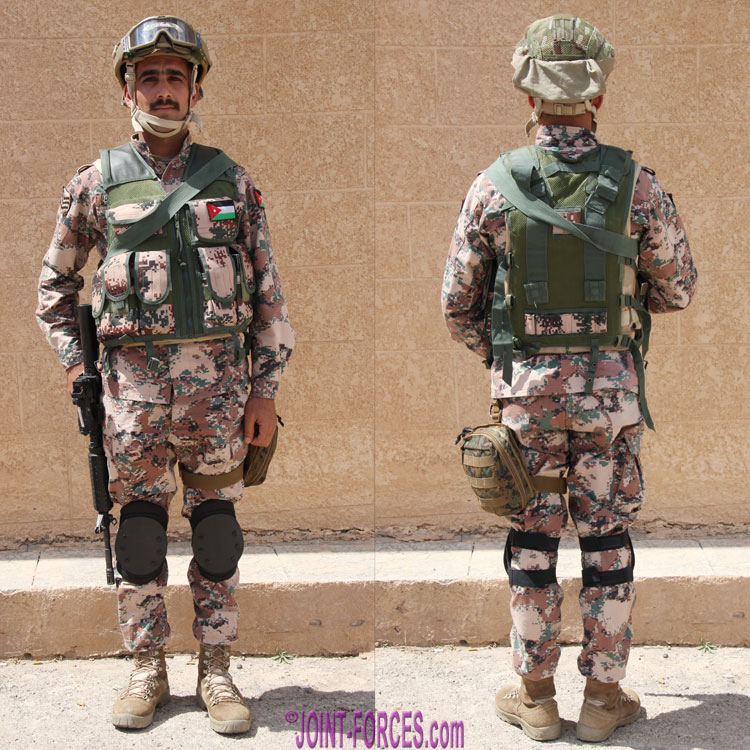 One interesting facet of the KA2 programme, as befits a digital project, is that all development took place by telephone and internet, with the HyperStealth team remaining in Canada and merely despatching cloth samples by courier at the relevant stages of the design process. Despite the distance between Vancouver and Amman, use of secure electronic transfer allowed decisions to be reached almost instantly, with the basic design being completed inside a month. It took just two months more to tweak the colours to suit Jordan’s remarkably wide range of terrain diversity, which includes everything from arid desert through to near-alpine forest and sees temperatures ranging from over forty degrees centigrade in summer in the south, to sub-zero in winter in the north. 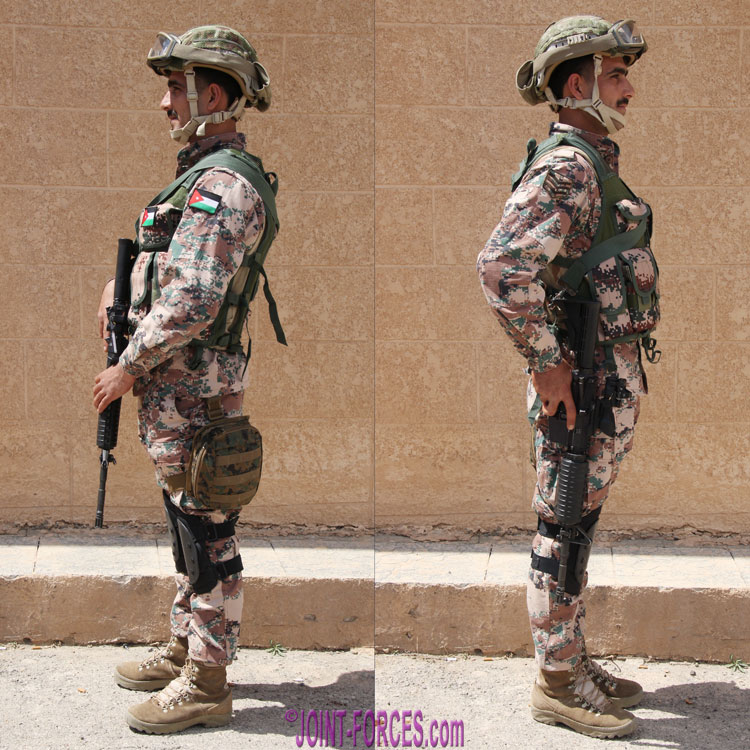 Uniforms manufactured from fabric printed with the first of the new digital patterns were tested in the field from October 2003, and subsequently several military, police and civil defence forces evaluated patterns for their own precise needs. The Jordan Army and Royal Air Force pattern, usually referred to as KA2 Desert, was the first to be approved. This was followed by approval of the KA2 Royal Guard pattern, which was cleverly designed to cover both arid and woodland zones. Next, the KA2 Special Forces and KA2 Urban Civil Defence patterns gained approval, followed by the KA2 Navy and KA2 Urban Public Security patterns, bringing the total to six distinctly different schemes. 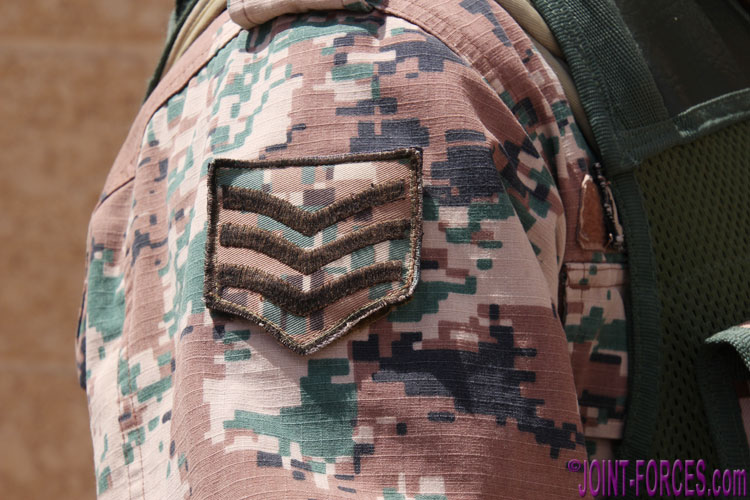 Sergeant’s stripes – the JAF rank structure and insignia is closely based on that of the British Army – as Jordan’s terrain, though mostly arid, is quite varied more green than one might expect is used [© Bob Morrison]

The KA2 Desert pattern uses a slightly pinkish sand base colour over which is laid a dark brown, with smaller areas of dark green and small patches of black. The KA2 Special Forces variant, now superseded by an analogue design which is in many ways quite similar to MultiCam is a predominantly woodland zone camo, similar in general colour effect to some NATO 4-colour woodland patterns, with dark green over a lighter (pea) green base and quite large areas of a more reddish brown than KA2 Desert, plus small black patches. The KA2 Royal Guard colours are also light green, dark green, brown and black, but the brown is much lighter than that used on the Special Forces version, and the green is much darker. In addition to colour shade variations, these three patterns also use different percentages of their three primary colours, based on the foliage and terrain composition they are designed to be most effective in. For example, the Army deploys primarily in the country’s arid border regions, whereas the Royal Guard deploys nationwide, and the Special Operations Forces were at that time expected to deploy outside of their national boundaries, particularly on multinational peacekeeping duties, in addition to serving on their country’s front line. 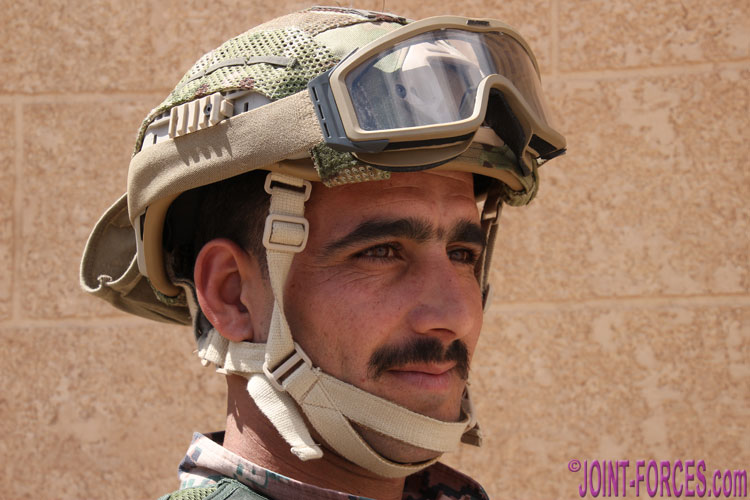 Many Jordanian combat helmets are now locally produced but these goggles are from ESS – helmet cover is MultiCam-compatible, not KA2 Desert [© Bob Morrison]