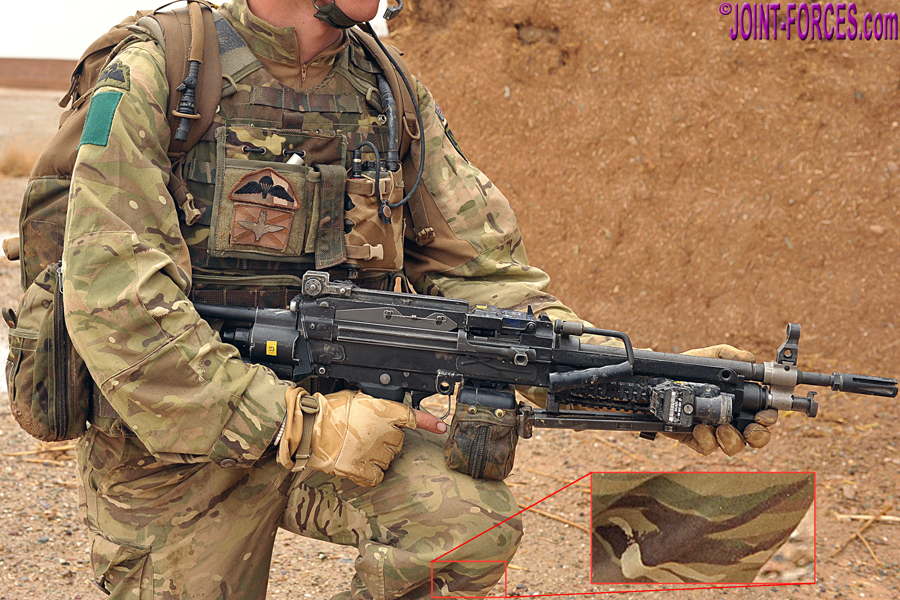 For over a decade British troops have been wearing Multi-Terrain Pattern camouflage but some still confuse this with Crye Precision’s MultiCam, writes Bob Morrison.

Now that some UK Forces have reverted to wearing MultiCam, first seen worn operationally by a few UK Elite and Special Forces on Operations TELIC in Iraq and HERRICK in Afghanistan before the 2010 adoption of Multi-Terrain Pattern or MTP, this is probably a good time to look back at the origins of the British camo pattern. The bulk of the following article was penned by myself, with help from Carl and our long-time ‘facilitator’ known as Sniper John, ten years ago in April 2011 but I have updated it for 2021.

Virtually all UK land forces personnel deploying to Afghanistan’s Helmand Province since the start of Operation HERRICK 12, the six month long 2010 summer roulement, were issued with combat clothing in the then new Multi-Terrain Pattern (MTP) camouflage developed specifically for the UK Ministry of Defence in the second half of 2009. A derivative of the MultiCam pattern, which was developed by Crye Precision in the United States and later issued to some frontline US Army units in Afghanistan as OEFP, the new British camo is rather unusual as it blends the mimetic MultiCam with elements of the British DPM (Disruptive Pattern Material) which, as its name suggests, was intended to disrupt rather than mimic.

As MTP is a close derivative of MultiCam, sharing both pattern shapes and colour shades, garments and kit manufactured from either design are compatible and complimentary. Indeed those unaware of the precise differences may possibly confuse the two and it is not difficult for the unscrupulous trader to pass off one as the other, so when buying kit one must exercise a degree of caution. To compound this, the Polish camouflage pattern usually referred to as Camogrom was also a reasonably close copy of the MultiCam concept; this pattern is no longer widely available following, it is believed, an Intellectual Property Rights challenge by Crye Precision. Russian and Chinese close copies of MultiCam have also been issued, mostly to Special Forces or Special Operations personnel, as have some copycat patterns of indeterminate (but most likely Far East) origin, including one low cost alternative sometimes marketed as BTP or British Terrain Pattern.

Origins of UK MTP: Back in 2009 UK MoD civilian scientists from the Defence Science and Technology Laboratory (Dstl) working in conjunction with the MoD Defence Clothing IPT (Integrated Project Team) researched, tested and trialled various samples to discover whether an off-the-shelf mixed multi-terrain camouflage pattern (e.g. MultiCam) could improve mission success and keep soldiers hidden for longer during ambush operations or when on patrol. During the six month programme they specifically assessed whether a multi-terrain camouflage might be better for troops in Afghanistan’s Helmand Province – who were operating in a mixed desert, woodland, mountainous and urban landscape – than the standard British four-colour woodland or two-colour desert DPM camo patterns then in use.

Computer modelling was carried out across representations of the Green Zone fertile area around the Helmand River, the desert environment away from the river valley, and different transition backgrounds. Soldiers operated in various scenarios in a simulated set of environments to test how the different camouflages performed in situations where staying undetected was important. In a nutshell overall Crye MultiCam performed best, supporting the theory that a multi-terrain camouflage offered improvements when soldiers move between different places and backgrounds. Interviews and subjective testing with service personnel indicated they would be happy to wear the new camouflage and backed up the belief that the concept of a multi-terrain camouflage was desirable and effective.

However it was also decided that rather than just adopting straight MultiCam it would be advantageous to build in differences to emphasise the British Forces identity so Crye Precision, who developed the original MultiCam in use with some American forces and allied nations, were asked to incorporate elements of the highly successful British DPM into the final pattern. As a result, some of the familiar shapes of DPM, along with the distinctive ‘paint spatter’ edges, were computer-designed into the finished pattern. Incidentally, the British Government bought the Intellectual Property Rights of what is now designated Multi-Terrain Pattern to prevent other countries using the same camouflage uniforms; though subsequently troops of some friendly nations, including Bahrain (BNG Spec Ops) and Ukraine, have been spotted wearing British MTP uniform. Note, however, that although Maltese troops wear British design combat uniforms these are tailored from MultiCam and not MTP fabric.

To illustrate the evolution of MTP, in 2011 I delved into my camo fabric collection to find garments and swatches of material that contained the exact same shapes and patterns, focussing on a couple of easily identifiable areas to make detection easier. I labelled two of the easiest to identify shapes – sometimes referred to by camo collectors as DPM ‘pterodactyls’ – as X and Y for clarity. On four-colour DPM, such as traditional British temperate / woodland or tropical variations, or the Omani desert derivatives covered in the last article, these ‘pterodactyls’ are the darkest colour. However on British two-colour Desert DPM, where screens were merged, only shape X is clearly identifiable. Shape Y, on the other hand, can be easily spotted on the 2010 design MTP fabric and proves the direct link with old and new UK patterns. I have highlighted this shape on the knee of the trousers worn by the British Para in MTP (lead image on this page) photographed in Afghanistan by Carl in February 2011.

Roll forward a decade, and the British camouflage pattern story has become more complicated. In June 2020 the Royal Navy announced that, as part of a rebranding programme, Royal Marine Commandos would be getting new American uniforms in Crye MultiCam pattern to replace their Multi-Terrain Pattern garments. Curiously, the British Army Specialist Infantry Group demonstrating equipment during the Project HERMOD IR (Integrated Review) rehearsal in March 2021 also appeared to be wearing Crye MultiCam uniforms, rather than MTP, which suggests that the Army’s newly formed Ranger Brigade might also go down the same route.

One could be forgiven for wondering, with MultiCam uniforms now appearing across at least two of the branches of service, whether specialised British Army units are being rebranded as Royal Marines Commandos or vice versa. Or would that be perceived as being a tad facetious?

The question should possibly also be asked if the additional cost of UK Forces buying traditionally very expensive proprietary Genuine MultiCam uniforms to replace already IP-licensed Multi-Terrain Pattern camouflage garments is justified as a way of “rebranding” bearing in mind just how similar the camouflage patterns actually are under field conditions.

Updated, 18 April 2021: One of our Polish readers (AC) has contacted us to say that the Polish copy of MultiCam is/was called Suez and that Camogrom was the name for the commercially available version supplied by Helikon-Tex. In the group photo of Polish and American Special Forces he believes the US operator is wearing MultiCam / OEFP (not the later OCP) and the Polish soldier on the far left is wearing fire-resistant Polish SOF uniform manufactured from Genuine MultiCam. Referring to the Russian Spec Ops team member pictured above, AC says he believes the under body armour combat shirt worn is standard US Army issue flame-resistant ACS (Army Combat Shirt) in MultiCam and the helmet cover is made by Russian company SRVV using Genuine MultiCam; although not visible in the photo above, the Russian team at KASOTC in 2014 were wearing labelled SRVV magazine pouches on their load vests (see photo below).