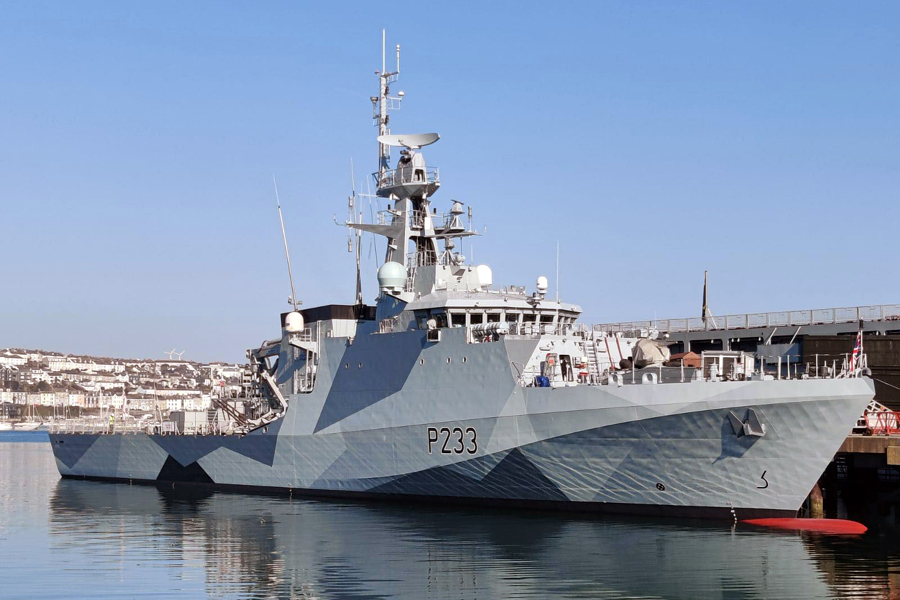 Royal Navy News Release: An iconic paint scheme has been applied to a Royal Navy warship for the first time since World War 2. New patrol ship HMS Tamar will head to the Asia-Pacific region with a ‘dazzle camouflage’ paint scheme – various shades of black, white and grey in strange or jarring shapes.

The paint scheme, introduced by the Royal Navy towards the end of World War 1, was adopted by many of the world’s navies at the time – and repeated again between 1939 and 1945. The different shapes, angles and colours were intended to confuse submariners peering through periscopes, making it hard for them first to identify ships and confuse their calculations about the target’s speed and direction – hopefully causing a torpedo to miss. With the end of the war and the improvement of radar and optical devices, dazzle camouflage was quickly phased out by the Royal Navy after 1945 – until now.

Tamar, which entered service last year, already stands out from much of the rest of the Royal Navy fleet thanks to large red lion motifs on her superstructure (they are being replaced before the ship sails next week). Now shipwrights at the A&P yard in Falmouth have added the dazzle scheme to her hull – 200 litres of paint in four shades of grey, plus black – during a maintenance period, at the same time retaining the distinctive lion emblems.

“We’re really proud of our new paint scheme and the historical significance that it comes with,” said Lieutenant Commander Michael Hutchinson, Tamar’s Commanding Officer. “Different styles of dazzle were used by the Royal Navy on ships in various stations throughout the world and were are pleased to have been given an iconic new look before we deploy in the summer.”

Commander David Louis, Commander of the Overseas Patrol Squadron, said that before dispatching Tamar on her Pacific patrol, the Navy had decided to give the River-class ships a distinct identity to recognise their extended missions. The squadron’s vessels are deployed for several years at a time, operating out of overseas bases and ports in areas key to UK interests, national security and prosperity: the Caribbean, Falklands, Mediterranean and West Africa, and now Asia-Pacific.

“Dazzle has much less military value in the 21st Century although there is still value in littoral environments when viewed against the background of land,” Commander Louis explained. “It is very much more about supporting the unique identity of the squadron within the Royal Navy as part of their forward presence mission.”

Dazzle paint/camouflage owes its existence to Royal Navy officer and artist Norman Wilkinson and the height of the first Battle of the Atlantic in 1917. With Britain struggling to deal with the U-boat threat, Wilkinson came up with the idea of confusing U-boat skippers during patrols out of Plymouth. He couldn’t make ships invisible – the smoke belching from their funnels were an obvious give-away – but he could make it much harder to identify them, or judge their course and speed.

After tests with miniatures, the paint scheme was approved by the Admiralty and introduced across the Fleet, merchant Navy and then allies. More than 2,000 ships received the strange livery before the end of the Great War, and despite improvements in technology such as the advent of better rangefinders and radar, the camouflage scheme returned in early World War 2 and remained in use until the fall of Japan in 1945.