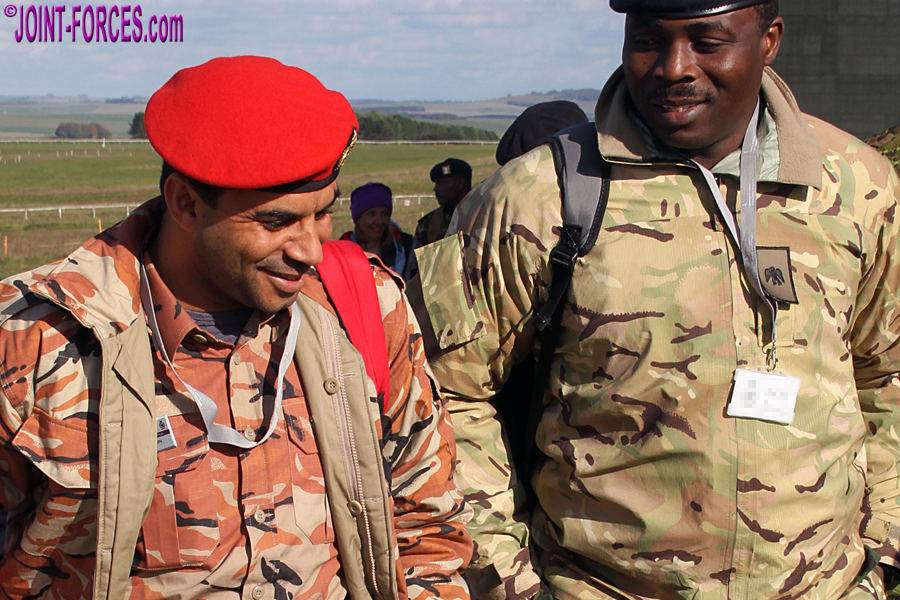 The Sultan of Oman’s Armed Forces have worn Disruptive Pattern Material camo variants since the 1970s and more recently in an orange colourway, writes Bob Morrison.

For the first few years after the late Sultan Qaboos assumed the Omani throne in 1970 his troops wore British Temperate DPM (Disruptive Pattern Material) camouflage but during the 1980s a distinctive four-colour pattern more suited to the country’s arid terrain was introduced. Using the same design as British Temperate DPM, the new Omani pattern used orange and light khaki on stone as its main colours with smaller black shapes for depth.

Being a straight derivative of British DPM, some of the shapes of this first Omani desert camo had spattered edges; it is sometimes said these spattered edges were a throwback to British WW2 ‘brushstroke’ pattern, but in reality they more likely owe their heritage to later ‘lizard’ pattern derivatives. In the late 1990s Oman changed its camo pattern again, using a new design which replicated DPM to some extent without copying it exactly, and the light khaki colour was changed to light orange. The spattered edges to the shapes were also removed and spray-effect areas of stippling were introduced in dark orange and black. The combat shirt and combat jacket featured here, loaned to us by the East-West Trading team who have secured some mint condition Omani garments, is in this later colourway.

Both featured garments were manufactured by Fevam Industries and supplied to the Omani Government by Al-Obaidani International, an Oman-based company which produced combat and dress uniforms for armed forces across the Gulf Cooperation Council (GGC) states. They are well tailored and quality is high, which is no less than one expects of goods produced in Oman for the nation’s armed forces. Regrettably I have not yet had the opportunity to work with the Sultan’s mainstream forces in the field, though I have photographed black-clad Omani Spec Ops troops at KASOTC, but I have occasionally been able to photograph Omani officers at events in both the UK and Jordan. On Salisbury Plain the camo stands out noticeably, but in the bright and arid conditions of the Middle East it does not look out of place; my feeling, having visited the UAE-Oman border region a couple of times, is that it probably works very well in the region, particularly in the morning and evening when the sun is low.

Turning first to the combat shirt, which is sized Small, this is of conventional two pocket design with a plain buttoned front and long sleeves. There are six small olive green buttons down the front, the two pleated flat-sewn chest pockets have a single button apiece for their clipped straight-edged flaps, the shoulder straps for rank tabs have similar buttons and the sleeve cuffs are buttoned. The hem is scalloped, the upper back is pleated, and the waist is slightly shaped.

The combat jacket, in this case sized Medium, is longer and of five pocket design – 2x chest, 2x lower cargo and 1x left sleeve – with a single action front zip and button-down cover flap. Inside there is also a simple document pocket on the left side and a lower ‘poacher’ pocket across the back. Buttons are identical to those on the combat shirt, though there are two apiece on each sleeve cuff, and there is a straight hem with drawcord. All four front pockets are of half-bellowed type – i.e. the lead edge is flat sewn and the trailing edge is pleated – but the sleeve pocket is flat-sewn. Pocket flaps are envelope envelope-style and the chest pockets are slanted.

This combat jacket is summer weight, but a heavier version with internal buttons for a removable liner and an external waist drawcord have also been produced. The two officers who I photographed in autumn 2015 in the UK were wearing this version, which had light khaki coloured buttons. The combat shirt and trousers worn by the Lieutenant General I photographed with HRH Prince Faisal of Jordan in 2006 had the same lighter buttons, which suggests our Omani Orange DPM garments may well be of post-2015 manufacture. One last minor point, in bright sunlight it is not always possible to spot that there are two distinct orange shades and sometimes these garments can appear to be three-colour.

Our thanks to Andy and his Essex Boys team at East-West Trading for loaning the pristine shirt and jacket, till in their original bags. At time of writing they still have a few examples in stock, but don’t expect these good quality garments to hang around for too long once this brief article is published.