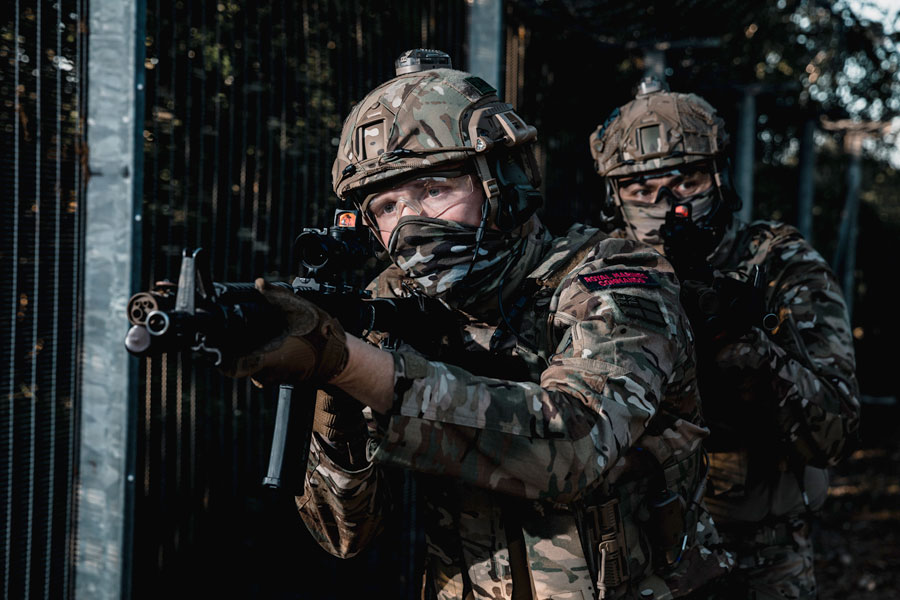 The Royal Marines Commandos are to get a new American uniform in Crye Precision MultiCam camouflage pattern to replace Britain’s Multi-Terrain Pattern.

Royal Navy News Release, 26 June 2020: Royal Marines Commandos are to get a brand new uniform under the most significant transformation and rebranding programme launched since World War 2.

Elite commandos of the Royal Navy are undertaking a bold modernisation project – known as the Future Commando Force programme – which will overhaul the way world famous Green Berets operate around the globe. As part of this restructuring, Royal Marines will have a new uniform, fit for a new era of warfare, that is in-keeping with the maritime traditions of the corps, and also honours their commando forebears.

The NATO procured uniform – which is been [sic] procured from USA-based firm Crye Precision – is lighter weight, has higher tear-strength, is faster-drying and is more breathable than typical 50/50 cotton/nylon kit. It also has a subtle change in camouflage design – instead of the previous Multi-Terrain Pattern – the uniform now uses Crye Precision’s MultiCam pattern.

And, in the week that saw the 80th anniversary of Operation COLLAR, the first commando raid of World War 2, the marines have drawn on their heritage by returning to the traditional Royal Marines Commando insignia, just like the design first worn by commandos when they launched daring raids into Nazi-occupied Europe. The flash with red writing and navy-blue background will be worn once again, as commandos evolve to conduct more raids from the sea, persistently deployed to counter the threats of the modern-day battlefield. For the first time the White Ensign features on one sleeve, as a clear indication of the Royal Marines’ integration with the Royal Navy. The iconic Fairbairn-Sykes Dagger patch of 3 Commando Brigade Royal Marines has been redesigned and is based on the first pattern of the legendary fighting knife made in 1940.

Lieutenant Colonel Ben Reynolds RM, who led with the procurement and design of the new uniform, said: “The Royal Marines are integral to the Royal Navy and an extremely versatile elite force, able to operate from mountain and Arctic wastes to jungle and littorals.

“The Royal Marines’ Commando Uniform 2020 reflects our distinctiveness and the unique capabilities we bring to defence, in addition to the Royal Navy’s eagerness to invest in our development towards the Future Commando Force.

“The practical benefits to this uniform shouldn’t be underestimated. It has been specifically selected to serve commandos as they carry out operations all around the globe in the most extreme environments.”

Marines are already receiving the new combat shirt and trousers, field shirt and trousers, a utility jacket and utility belt and will begin wearing the new uniform from this Autumn. The new uniform – which harks back to the fabled commandos heritage while modernising their equipment – is part of a wider transformational drive which will change the way Royal Marines operate. Under the Future Commando Force programme more Royal Marines will operate from the sea, utilising new and innovative technology as high-readiness troops, forward deployed and ready to react, whether that’s war-fighting, specific combat missions such as commando raids, or providing humanitarian assistance.

Minister for the Armed Forces, James Heappey, said: “The Royal Marines require a uniform that they can rely on in the most hostile of environments on earth. This robust, breathable and lightweight kit will ensure our commandos remain fighting fit and able to deal with the full range of threats we rely on them to face.

“It is fitting that on the 80th Anniversary of the first commando raid of World War 2, this uniform now bears the traditional Royal Marine Commando insignia. A poignant link to their history as the commando force embarks on a modernisation programme that will keep them in their place as the world’s best amphibious force.”

The Royal Marines’ Commando Uniform 2020 was procured in just over one year, utilising the NATO Support & Procurement Agency, demonstrating the Royal Navy’s appetite to invest in the Royal Marines.

Editor’s Comments: This afternoon we asked the Royal Navy News Desk at MoD Main Building the following questions, which we suspect many camo and gear aficionados may also be asking:-

A1: No, as MultiCam and MTP are broadly compatible.

Q2: Is the new MultiCam load vest worn in the illustrations replacing the current issue VIRTUS vest in MTP?

A2: Only Royal Marines Commandos clothing items are currently being replaced.

Q3: Will British Army personnel from RA, RE and RLC etc. in units supporting 3 Commando Brigade be issued with MultiCam or will they continue wearing MTP.