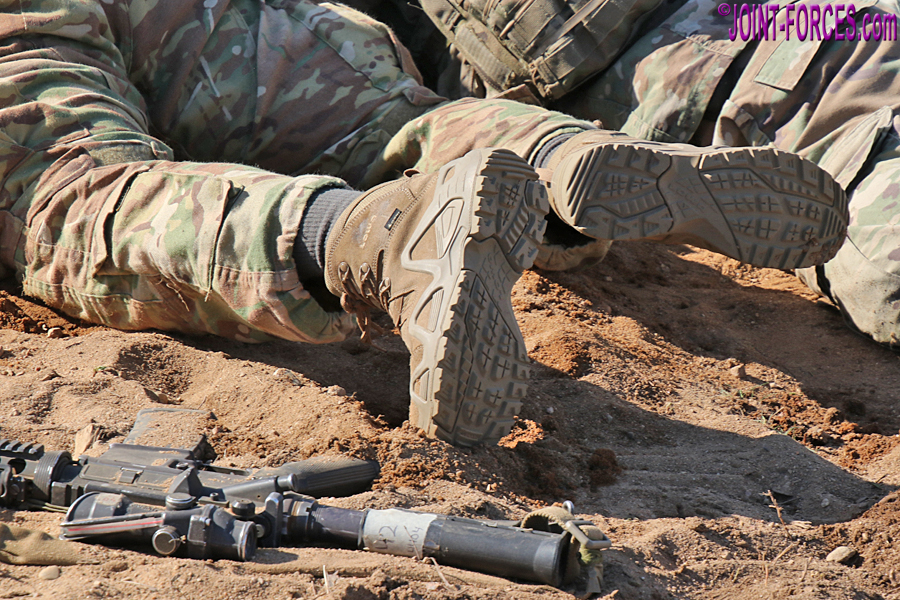 The keen-eyed might have spotted some UK and US Paras in Afghanistan wearing the LOWA Zephyr GTX MID TF middle-weight combat boot, writes Bob Morrison.

This mid-height, mid-weight Gore-Tex membrane boot has long been favoured by many NATO Special Forces and Special Operations personnel, who tend to be allowed a lot more leeway when selecting footwear and personal kit for the job in hand, so it is probably unsurprising that quite a few elite airborne personnel are also opting for these boots.

When I was out in Estonia earlier this year covering Exercise SWIFT RESPONSE, I noticed that a fair number of American and British Paras (plus some Danish Dragoons) were wearing LOWA Zephyrs and made a point of snapping them for reference. During a lull in the action out on the live-fire ranges on the Tapa Polygon I asked some of the guys from 508 PIR, part of the 82nd Airborne Division, why they were wearing this particular type of boot and they explained that the Zephyr GTX model had proved itself as a good all-rounder on operations in Afghanistan, where they encountered a wide range of terrain and conditions. Over the last ten days or so, as much of Afghanistan speedily reverted to Taliban control, I paid close attention to newsreels and photos to see what troops from 82nd Airborne Division and 16 Air Assault Brigade conducting the NEO (Non-combatant Evacuation Operation) were wearing on their feet and sure enough there were plenty of Zephyrs to be spotted; indeed the British Para at the right side of the lead photo used for Friday’s Op PITTING Press Release is wearing a pair.

My first experience of the LOWA Zephyr GTX MID TF boot goes way back to the end of 2014, a little after I visited the European HQ of W.L. Gore and Associates for an introduction to their new range of three waterproof and breathable laminates conceived specifically for footwear. At that time four manufacturers – HAIX, LOWA, Meindl and YDS – were partnered with Gore in developing the new membrane for combat boots, though the range has now proved so successful that the Gore-Tex label is found on a good many more boot makes. Back in late 2014 and early 2015 the two LOWA boot models I tried out which incorporated Gore-Tex membrane technology were the lightweight Zephyr GTX in tan and the slightly heavier Z6-S GTX in UK MoD Brown. Both were exceptionally good boots, but it was the Zephyr which really made its mark and this boot would subsequently make many trips with me to hot climates on assignments; often as my back-up to the primary desert boots I was testing on the trip.

Talking only yesterday to a friend who happens to be a 1 PARA SNCO about the Zephyr I asked him why this particular boot had found favour with so many British Paratroopers and he replied: “Weight, comfort and reliability. In our job every saved ounce counts. That’s why so many of the lads like Zephyrs.”

There were many similarities between the Zephyr and the earlier Z6-S, which was intended for three-season use and incorporated the Gore-Tex MS Light Rock breathable laminate, but the Zephyr GTX model (a non-membrane version is also produced) incorporates the Gore-Tex Vision 3LY Extended Comfort breathable laminate making it is ideal for warmer climes. At present mid-height combat boots are favoured by some NATO armies (there is a good reason for this but it would be going off at a tangent to discuss it here) but in addition to the 6-inch version LOWA also makes an 8-inch high leg version for those troops who need it. The Zephyr is also produced in different colours, including black for law enforcement wearers, but Coyote Tan is probably the most commonplace colourway.

For those interested in the technicalities of the LOWA Zephyr GTX MID TF boot the details below are taken off the Product Sheet, and if you want to read Mike Gormley’s thoughts on these boots for civilian use click on the link below:-