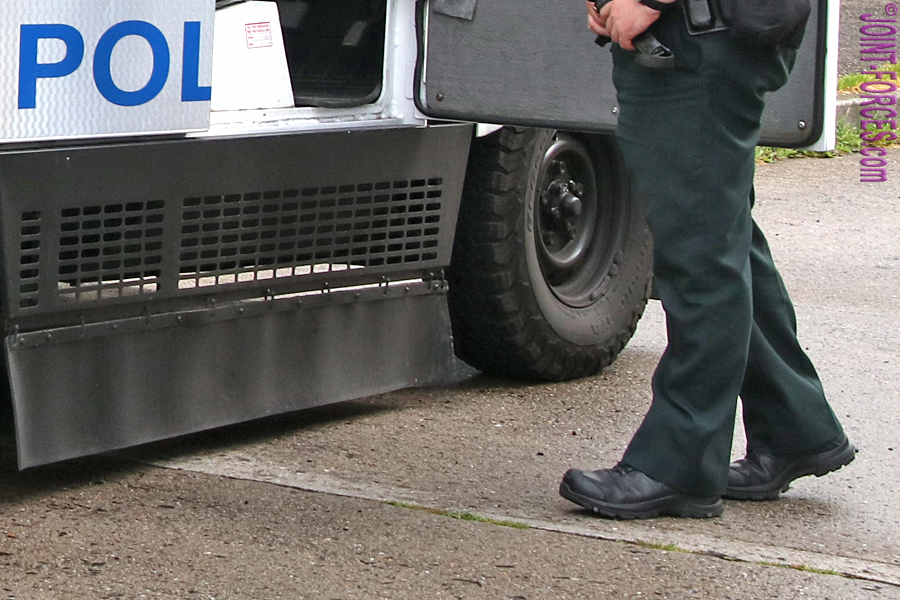 First of all, this article is not a review as such and is merely an observation or two. Over the last decade or so I have worn several different boot models from the HAIX Black Eagle range but as my job does not require that I wear S3 classification PPE (Personal Protective Equipment) footwear I have not until now paid too much attention to the HAIX Safety boot range. Many PSNI (Police Service of Northern Ireland) officers on the other hand, for whom at times Public Order Duties can be a regular part of the job, do need to wear safety boots, and shoes, for personal protection reasons and this is where the mid-height HAIX Black Eagle Safety 50 uniform boot steps to the fore.

Newsreel footage coming out of Northern Ireland at some times of the year often presents a skewed overview of policing in the Province, as of course dramatic clips of riots and crowd control on the streets of the capital draw in more viewers than scenes of officers on routine beat or rural patrols. This year the annual parades in Belfast on 12th July were comparatively low key and non-controversial, meaning that even around the traditional hotspot locations the officers did not need to ‘suit up’ with PPE to deal with public order issues; indeed from early morning through to late evening all officers I encountered out on the streets with their Armoured Land Rovers were in shirt sleeve order and wearing normal uniform headgear rather than having donned RoboCop-style riot gear to protect themselves against house bricks and petrol bombs. However Ulster being Ulster, they had their PPE close to hand in the back of their Land Rovers and most were wearing their standard issue safety boots just in case something unexpected brewed up.

The HAIX Black Eagle Safety range, a leather uppers design available either as a shoe or as a mid-height or full-height boot and with different safety specifications, is aesthetically very similar to the Black Eagle Tactical 2.0 GTX model in the HAIX military footwear range. However this version being a safety boot it has a composite protective toe cap made of fibre-reinforced plastic and a flexible metal-free lightweight protective through-sole to comply with Health & Safety regulations. Additionally, the BE Safety mid-height boot has a leather tongue with central lace location tape, whereas the BE Tactical mid-height version has a textile tongue and is fractionally lighter as leather thickness is 1.6 to 1.8mm rather than 1.8 to 2.0mm. Both these Black Eagle variations have the uninsulated three-layer Gore-Tex Extended waterproof and breathable membrane as standard, though membrane-free versions are also produced.

Other than the toecap, the one area where the two Black Eagle models diverge most is in the sole design. Whereas the BE Tactical model has a fairly conventional (for HAIX) rubber sole pattern, the BE Safety model has a slightly unusual rubber and polyurethane cushioned sole with light grey insert sections said to give enhanced toe-to-heel support. The design of these Safety soles, which the manufacturer claims provide excellent thermal insulation, seem to rise at the toe and to help pronate the foot; I suspect this is because police officers, who this boot style is primarily aimed at (though it is also favoured by other blue light personnel) usually carry much less equipment load than soldiers and their role can often see them running at high speed for short bursts and standing still for long spells, rather than tabbing or yomping long distances for extended periods with a heavy rucksack on their back.

As is often the case with soldiers as well, few of the officers I spoke to about their footwear actually knew who the maker was and some even told me it was Gore-Tex. This seemed a bit weird as the HAIX logo is embroidered on the lace pocket at the top of the tongue, whereas the small Gore-Tex label is much lower down under the ankle. However when I put on my own BE Athletic mid height boots once back home, boots which also have HAIX embroidery on the tongue lace pocket, I realised the name is next to the leg when putting the boots on and covered by the thumb when flipping the pocket down so it is not really noticeable to the wearer; the HAIX title is also hidden by the trouser hem most of the time so maybe it is not so surprising that these police officers couldn’t name the brand. It was also interesting that few realised the H and X motif in the leather, the initials of founder Xaver Haimerl, was the company brand.

That we spent so much time talking about footwear in Belfast on the 12th of July is the clearest sign yet that this year’s anniversary was one of the quietest for a very long time… and everyone I chatted to on the day was happy it was thus. All were also happy enough with their ‘company boots’. Finally, thanks to Officer P for posing for the close-up photos ~ another sign that the atmosphere on ‘The Twelfth’ could be described mellow this year.