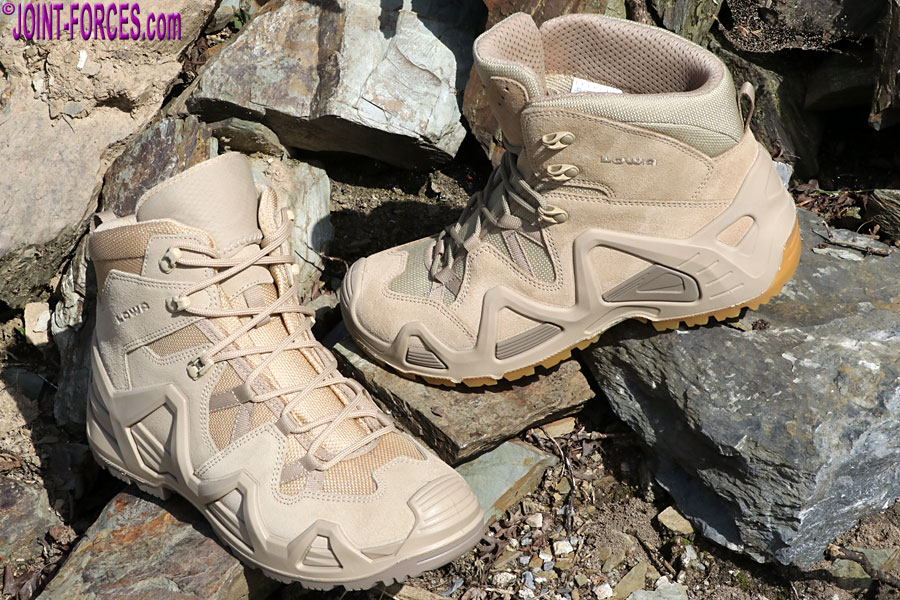 The lightweight ZEPHYR close-quarters combat boot from LOWA has been a firm favourite for the last seven or so years, and especially so with some Special Operations and Airborne Forces ~ see LOWA GTX MID TF In Focus.

Popular as the original LOWA ZEPHYR boot was, and still is, it was not however certified as being Occupational Footwear in accordance with DIN EN ISO 20347: 2012 and as some corporate customers now insist on such certification the Bavarian footwear company decided to make minor changes to this popular police and military boot to ensure future compliance. While modifying the boot for certification, LOWA incorporated more recent design and construction techniques to benefit from advances in uniform boot materials and production while still maintaining the same fit as the original boot in both Standard and Wide last versions. These latest Certified models, which are now entering full-scale production, are being designated the ZEPHYR MK2 to differentiate.

At a quick glance there does not appear to be a lot of difference between the Original and Mark 2 versions of the ZEPHYR, but if you look a little closer you should spot small changes in the lacing system and in the design of the uppers. For example, there is a new locking lace hook at the fourth ‘eyelet’ position to give good two zone lacing, a tape loop for retaining the tongue high on the foot has been added for those who need this, there is a new lace pocket or holster at the top of the tongue and the redesign of the uppers means there is no longer any stitching in the flex zone. Turn them over and it is apparent that a different composite sole, with a new fast-roping zone and more angular tread pattern, is used for the latest model; the original ZEPHYR has the LOWA Cross type while the MK2 has the LOWA X-TRAC MILITARY type.

One feature of the new model which is not readily apparent is that a more tear-resistant version of genuine Cordura fabric is now used for the uppers. Also not readily apparent, a different type of 1.4mm to 1.6mm thick leather which is said to be more tear resistant is used. The MONOWRAP exoskeleton, which is a little more angular in appearance, has also been redesigned to improve foot protection; though as over the last six or seven years I have never had any issues with knocks and bumps to the foot while wearing my original ZEPHYR MID boots over rocky desert scree I can’t really say I have considered any more protection was required. (My daily footwear of choice when not testing other boots is usually the lighter mid-height LOWA INNOX Pro, but if likely to be crossing a lot of rocky terrain I would usually swap for the more robust ZEPHYR).

Although we are just looking at the mid-height boot here, the ZEPHYR MK2 will be available in three heights (HI, MID and LO) and in either GTX (i.e. with Gore-Tex Professional waterproof and breathable laminate lining) or non-GTX versions. Sizes range from UK 6.5 to UK 12 in halves plus 13-15, in both standard and wide fits, plus female last versions from UK2.5 to UK10 will also be available. There are currently six colours in the new range: Dark Brown; Desert; Black; Wolf, i.e. grey, as worn by some counter-terrorist units; Coyote OP, the slightly darker desert shade preferred by Americans; and Ranger Green, which is another predominantly American military shade but which also appeals to some customers in the Tropics. In the early days at least, MK2 boots in those colours not regularly purchased in quantity by UK customers might not be held in a full range of sizes in the Devon warehouse, but the core colours should be fully stocked in a few weeks time. Keep an eye on LowaMilitaryBoots.com for availability updates. The LOWA plan for the ZEPHYR is to eventually phase out the current model in favour of the ZEPHYR MK2, though for the present at least the originals will still be available for order by those customers who do not require boots which fall in the certified occupational footwear category.

The MK2 boots in the accompanying photos are all from the pre-production batch, in industry size EU42/UK8 so way too small for me to try out on my EU45/UK10.5 feet. However once full stocks arrive in the LOWA UK (i.e. Task Force Distribution) Plymouth warehouse in my size you can rest assured that I will try to ‘proff’ a pair for review. Based on my previous experience of both the original ZEPHYR and its lightweight INNOX Pro sibling, I reckon my feet should be in for a treat… but that’s something for another day.