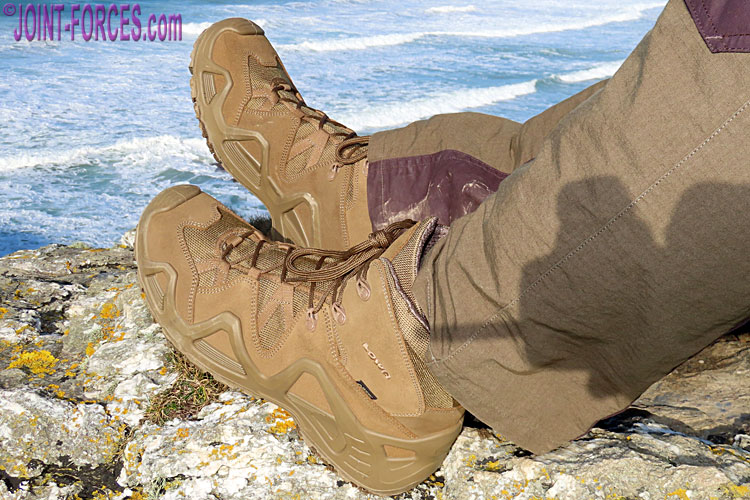 The LOWA Zephyr GTX Mid boots, though intended for warmer climes, were surprisingly well suited to this Cornish coast terrain in winter [©MG]

The LOWA Zephyr mid-height boot range, worn by Elite and Special Forces around the world, is one of the most popular in their Task Force Collection, writes Mike Gormley.

It has been a while since I covered a pair of LOWA boots, the last being their Mountain boot model which is still in regular use and still as comfortable as ever, but the Zephyr GTX Coyote Op Combat is a very different boot.

These lightweight boots are designed quite specifically for warmer climates and for both urban and natural conditions. We are told that the Zephyrs are worn by Special Forces around the world (see the Ed’s comments below) and clearly have design features well-suited to this type of usage. This said, they are a very versatile boot and equally good for the non-SF end user, as I discovered on a recent trip where I did not originally expect to use them as my primary footwear for the duration.

The Zephyr is built tough, using suede leather and Cordura fabrics, which are well supported by a formed outer ‘exoskeleton’ which is moulded as part of the sole. The outsole, which has the LOWA Cross pattern, is special and offers both extremely good grip on most types of surface but, importantly, also offers the wearer protection from the many potential hazards in both urban and rugged terrain. The lining used is the three-layer Gore-Tex Extended Comfort membrane which is both waterproof and breathable, as well as keeping nasty pathogens out.

Gallery 1: The moulded special sole unit has a complex tread pattern which really works well. The arch also has tread pattern to avoid slipping on edges and the instep is shaped for fast-roping. The heel section of the sole matches the main sole for grip. Note grips extend right to the edges for added sure-footedness in difficult situations.

Above all, and I definitely proved this feature, these boots keep your feet comfortable as well as protected for long days on the go. Unable to head somewhere hot and dusty to wear test them, I took off to storm-ravaged Cornwall in February to try the Zephyrs out. On the face of it not ideal conditions but, in reality, they were perfect. We spent a few days walking on the SW Coast Path during Storm CIARA; very wet, windy and difficult underfoot. I took other boots with me but in the end wore the Zephyrs all the time as they were not only comfortable but well up to the task. These have proved to be a very versatile item of footwear.

Gallery 2: The heel of a boot always gets harsh treatment so the sole unit of the Zephyrs is extended up to the heel to offer good protection. The moulded exoskeleton serves to protect both the boot and the wearer. The toe is well protected against the inevitable knocks these boots will get.

Editor’s Comment: I have worn the LOWA Zephyr, and the slightly heavier LOWA Z-6S model which evolved out of it, on quite a few assignments since 2015. Every couple of years I cover the Annual Warrior Competition for SpecOps at KASOTC (King Abdullah II Special Operations Training Center) in Jordan, where I have seen many Special Forces and SpecOps personnel from different nations wearing the Zephyr as their working footwear. Likewise I have seen French SF operators deployed in the Middle East with Zephyrs on their feet and various other nations’ elite wearing them in Poland and the Baltic States. When these guys are usually able to take their pick of boots, I reckon their choice speaks volumes.

Above: Library image of one of my Desert Tan LOWA Zephyr GTX Mid boots alongside the slightly more conventional UK Brown LOWA Z6-S boot which evolved from it [©BM]