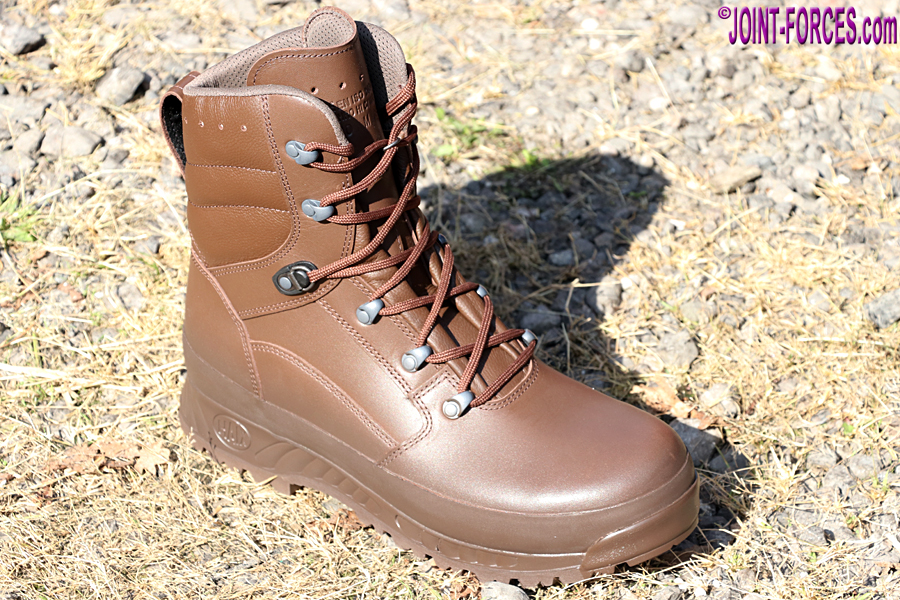 At the recent MSPO 22021 expo in Poland we spotted the Summer Boot produced by HAIX for the recent Lithuanian-led NSPA requirement, reports Bob Morrison.

NSPA is the NATO Support and Procurement Agency which “brings together, in a single organisation, acquisition, logistic, medical and infrastructural capabilities, operational and systems support and services to the NATO nations, NATO Military Authorities and partner nations”. In essence, the organisation tries to reduce defence procurement bureaucracy through one nation acting as the Leading Customer for specific kit which other nations can then buy with the confidence that the product meets the required specifications without them having to repeat procedures.

Lithuania is the Leading Customer for the current NSPA Combat Boots RFP (Request for Proposal) which is aiming to source footwear in three categories: All Season Combat Boot; Summer Combat Boot and; Cold Weather Combat Boot. Sizes specified are EU 35-49, for both men and women, and it is estimated that the initial five-year annual requirements would be around 57,000 pairs, 40,000 pairs and 17,500 pairs respectively. From a UK Forces perspective these three NSPA categories would closely equate to the current issue (2015 specifications) Lot 1 Combat High Liability Boot, Lot 5 Patrol Boot and Lot 3 Cold Wet Weather Boot options.

With permission and at a quiet time during the expo, we briefly took the HAIX Lithuanian Summer Boot sample off the company’s stand to photograph it outdoors in natural light. We were not, however, able to obtain a specification sheet as this model is not currently being produced for private purchase. However from available NSPA documentation we know that the uppers of this boot have to be manufactured from only from natural water-resistant leather and no fabric / textile panels are permitted. A rubber protective rand is also part of the specification and a waterproof membrane is not required. This requirement is logical as the Summer Boot is most likely to be worn in garrison and for basic training, rather than during the depths of a Baltics winter (Cold Weather) or on operational deployments (All Season).

My initial impressions on viewing and handling this boot is that it looks quite ‘British Army’ in style and it would not surprise me in the least if HAIX were to offer it for one of the forthcoming (early 2022 RFP) UK MoD combat boot requirement categories. In some ways the look of this boot is quite similar to the HAIX 2012 CWW boot supplied to UK MoD, though as is now a common requirement throughout most European armies the back is scalloped for increased leg comfort when travelling in protected vehicles, and the lace furniture has been reduced from 4-1-3 to 3-1-2 configuration; that superb HAIX D-ring lace lock has also been retained. The uppers also incorporated the HAIX Climate System to regulate foot temperature and the composite rubber / polyurethane sole is the same proven HAIX Davos version used on HAIX UK MoD Brown boots over the last decade; and also on issue German boots such as the KSK 3000, Ranger GSG9-S and Ranger KSK models.

Unfortunately it is likely to be some time before a pair of these Lithuanian Summer Boots becomes available for us to test, but I am looking forward to the opportunity.