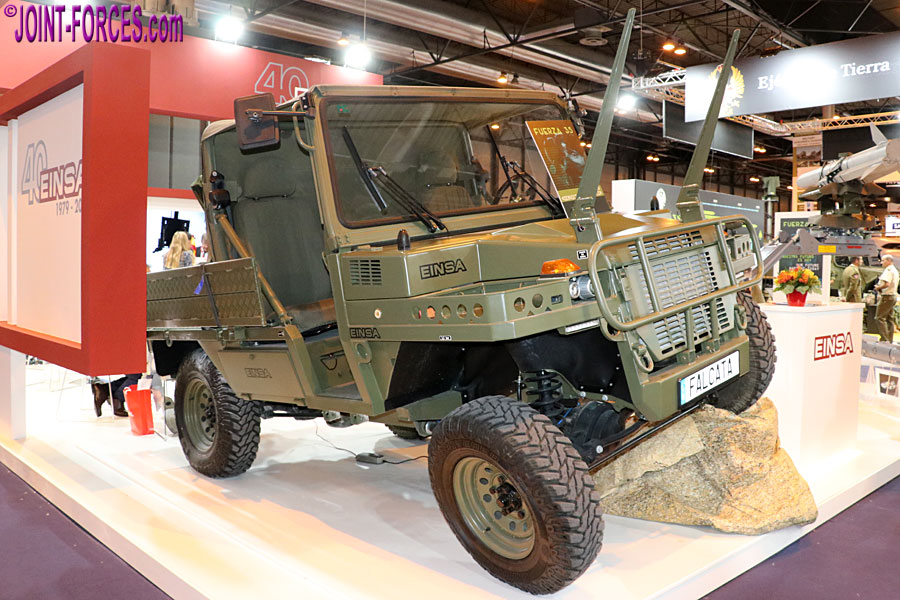 Publishing an article about a lightweight 4×4 vehicle used by elite military formations ~ e.g. Airborne, Commando, Special Operations or Special Forces ~ can be like opening the mythical Pandora’s box, or a ‘can of worms’, because it often promotes reader questions which take me down a path I had not actually been intending to follow. The feature on the recent adoption of the Polaris MRZR by the Royal Marines, which generated an additional 100,000+ page views for our website over roughly 24 hours, is typical of this phenomenon as it caused Carl and myself to produce an MRZR LTATV mini-series which then led to a feature on the USMC M1161 GROWLER which then prompted reader comments on the EINSA FALCATA MM-1A featured here.

My first encounter with the FALCATA, named after the ancient Iberian curved blade close-quarters sword, was at the FEINDEF 2019 defence and security expo where it was the smaller of two 4×4 exhibits on the EINSA stand; the other was the NETON, commissioned by Spanish Special Operations Forces. The result of a 2013 requirement by the Spanish MoD, with an order subsequently materialising in 2015, to equip BRIPAC (the elite Brigada ‘Almogávares’ VI de Paracaidistas) this FALCATA air-droppable light off-roader designated Vehículos Especiales Aerolanzables beat another ‘mechanical mule’ competitor proposed by Quadripole Ingeneria in evaluation trials. The first production batch, numbering approximately 30 vehicles, was speedily delivered before the end of 2016.

Minimalist in body design, the FALCATA is basically a cargo flatbed large enough to carry a NATO resupply pallet and a two-man driving compartment with the crew seated behind and either side of the engine and gearbox. There are two lines of rollers let into the loadbed and its drop sides can be unclipped and affixed to the rear of the bed to allow pallet loading and unloading; the demonstrator photographed at FEINDEF was not fitted with a load handling winch but the few photos of in-service MM-1A Mk2 vehicles I have seen have one mounted on the front bumper. There is a large diameter tubular roll-bar behind the crew compartment and an easily removable windscreen, plus a foul weather canopy with lightweight fabric doors can be fitted.

The FALCATA demonstrator has a demountable post mount for a heavy weapon in the centre of the loadbed and photos exist of both a 12.7mm machine gun and a 40mm automatic grenade launcher being fired on exercise on the Chinchilla Training Area. An Air Defence variant, with a twin Mistral launcher and side stowage bins which rotate outwards and downwards to form a crew platform, has also been produced; an image of a missile being fired exists. It would also appear that the vehicle is used as a tractor and ammunition carrier for the L118 105mm Light Gun.

According to the very basic information supplied by the manufacturer, the FALCATA MM-1A Mk2 can transport a payload of 931kg to 1200kg or carry four paratroopers with full kit in addition to the crew, though the standard BRIPAC vehicle only has cab seating for two soldiers. It can be air-dropped from a C-130 Hercules on a stressed platform, twelve vehicles can be transported inside a C-130, three can be transported inside a CH-47 Chinook, and it can be underslung from Chinook, Cougar, NH-90 or Super-Puma helicopters. Kerb weight is given as 2,000kg, it measures 3600mm long by 1900mm wide and its theoretical top road speed is 120km/hr.

Regrettably it has been many years since I last had the opportunity to work with Spanish Paratroopers on an airborne exercise so I have no images of FALCATA in the field, but as their Ministry of Defence is well down the path to modernising their armed forces under FUERZA 35, and is keen to promote this, who knows what the future may bring.