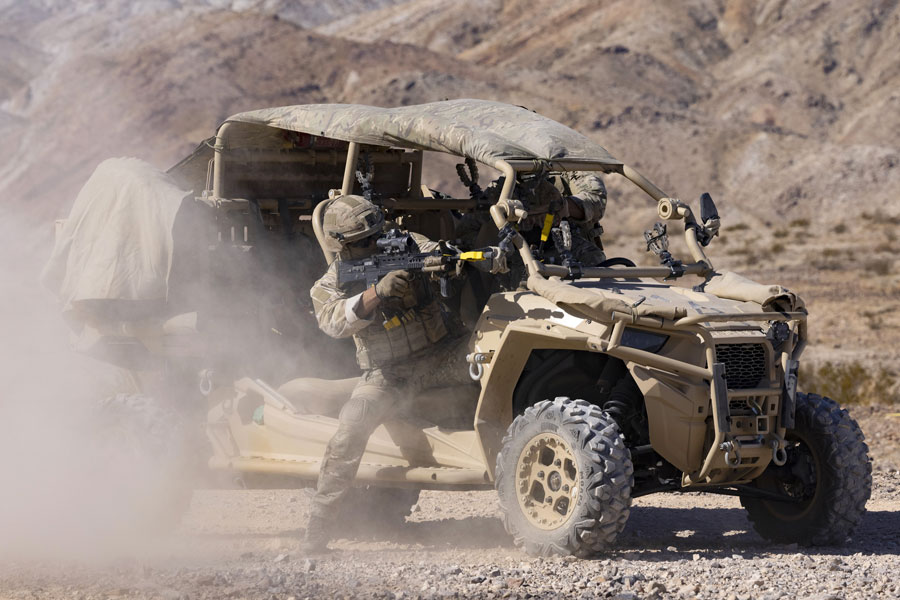 The JOINT-FORCES team has been well aware for some time that the Royal Navy has procured a batch of Polaris MRZR-D4 UTVs (Utility Task Vehicles) for the Royal Marines, it is understood via the NSPA (NATO Support and Procurement Agency) system rather than through a comparative tender and trials process, but although we asked the UK representatives of the American manufacturer for details and quantities supplied they were unable to discuss due to contractual confidentiality clauses. It has also been apparent that a version of the MRZR has been in service with UK Special Forces for a number of years (it has also been adopted by US Special Forces, US Marines and US Airborne) and it appears likely that the new British Army Ranger Regiment, as part of the new UK Special Operations Brigade, will be equipped with this vehicle too.

This July WO2 Chris Burge, the UK Commando Force’s master driver, was quoted on the Royal Navy’s website as saying: “Because of the Littoral Strike concept and the transformation of the commando forces, Royal Marines are trialling the light mobility vehicle and with that we are using the MRZR-D4 as a proof of concept.” He continued, “The MRZR-D4 is going to be used as an agile, nimble vehicle designed for smaller teams to get across the battlefield… It hasn’t got armour protection, so with that it’s more for manoeuvre and agility than for weapons systems.“

A small number of official photos of the MRZR-D4 being used by Alpha Company of 40 Commando RM on GREEN DAGGER 2021 were previously released, but only under the highly restrictive UK MoD New Licence which prevented us producing a feature in case we should incur the wrath of the Whitehall seat-polishers. However now that the accompanying images, taken by LPhot Joe Cater at 29 Palms MCAGCC in October, have been released under OGL (Open Government Licence) we can at last produce this feature. The block caption accompanying these images includes:-

“Littoral Response Group (South) have been conducting subunit training [in] the deserts of California to take on their US Marine Corps (USMC) counterparts later in a peer-on-peer scenario. Their training is in the excellent, and truly vast, range complex of the Marine [Corps] Air Ground Combat Training Centre at 29 Palms, California. Alpha Company which are 40 Commando Royal Marines Mobility Company have been using the New Royal Marines Vehicle, the MRZR which is a Polaris off road buggy to practise their drill…”

Over the Christmas and New Year period we expect our News sections to be less busy, unless the situation on the borders with Ukraine and Belarus further deteriorates, which should give us a little time to produce a more general feature on the Polaris MRZR complete with some facts and figures on this interesting 4×4 buggy.