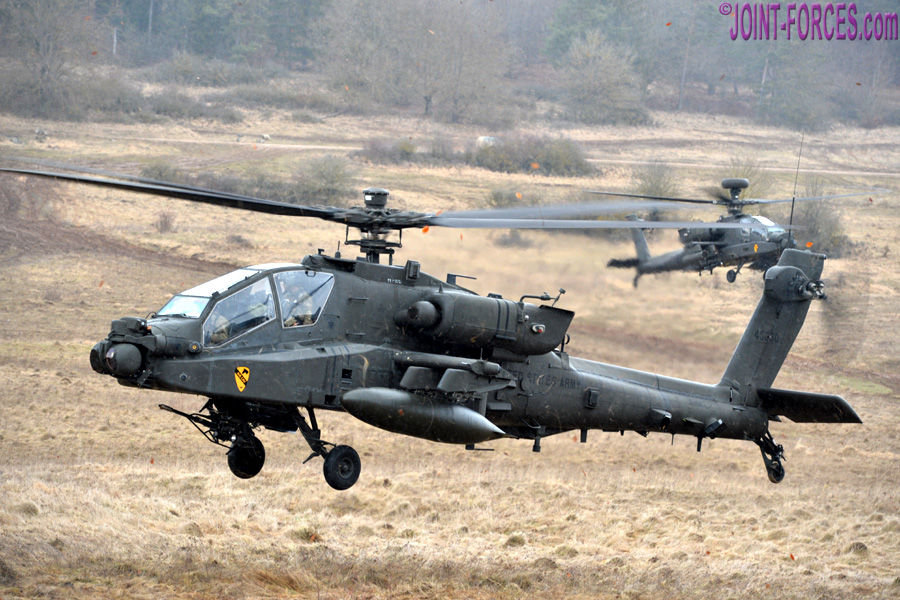 The multinational Exercise ALLIED SPIRIT 22 saw the participation of an Aviation Task Force provided by the 1st Air Cavalry Brigade of the 1st Cavalry Division of the US Army out of Fort Hood, Texas. The helicopter unit took part in the exercise under its Operation ATLANTIC RESOLVE rotational deployment to Europe.

Featuring Combat, Transport and MEDEVAC helicopters, the force supported both friend and foe during the combat phase of the exercise; namely the multinational training audience of the exercise, with its HQ provided by the German 1. Panzer Division, and the in-house Opposing Forces (OPFOR) of the Joint Multinational Readiness Center (JMRC) of the 7th Army Training Command in form of the Hohenfels based 1st Battalion, 4th Infantry Regiment of the US Army.

30 January 2022, 11:29. One kilometre south of Kittensee on the Hohenfels Training Area. Seconds ago it was absolutely quiet in the valley, with the only audible sound being that of the strongly blowing winter wind. Now the air is filled with the screaming noise of turbine engines and the constantly up-swelling and fading ‘hub-hub’ originating from the rotors of helicopters.

A force of four UH-60L Black Hawk utility helicopters and two CH-47F Chinook transport helicopters is approaching the valley from the east at tree top level. Within seconds the aircraft have landed close to the edge of a wood on the south side of the valley. Behind the trees is situated the command post of the German Panzer Grenadier Bataillon 401, an armoured infantry battalion. Doors swing open and ramps are lowered. This is the moment the soldiers of the 1st Battalion, 4th Infantry Regiment have waited for. At high speed they disembark from the helicopters of the Aviation Task Force provided by the 1st Air Cavalry Brigade of the 1st Cavalry Division and pepper out around them on the ground.

Once all troops have disembarked the noise of the helicopters swells up again and the aircraft take off as one wave, racing away at low level and at high speed in order not become victims of enemy fire. With the helicopters gone, the inserted US infantrymen sprint away from the helicopter landing zone, making their way to their target. Minutes later heavy small arms fire can be heard from the forest when the raiding force engages with the German Panzer Grenadiers guarding their unit’s command post.

Variety of Tasks: Lifting troops in order to conduct air assault raids was only one task performed by the helicopters of the US Army Aviation Task Force provided by the 1st Air Cavalry Brigade during Exercise ALLIED SPIRIT. Among the others were, for example, airborne reconnaissance, close air support to ground forces engaged in combat, airborne anti-armour warfare, supporting logistic assets with an airborne heavy lift capacity and casualty and medical evacuation.

The Aviation Task Force participating in Exercise ALLIED SPIRIT 22 was centred around the 2nd Battalion (General Support Aviation Battalion), 227th Aviation Regiment ‘Lobos’ of the 1st Air Cavalry Brigade of the 1st Cavalry Division, but it also involved assets of most other units of the brigade. Its main combat power for example was provided by AH-64E Apache Guardian attack helicopters of the 7th Squadron, 17th Cavalry Regiment ‘Pale Horse’.

The main advantage of the AH-64E is its open systems architecture that allows to incorporate the latest communications, navigation, sensor and weapon systems. The aircraft features many enhancements compared to its predecessor, the AH-64D. One is the Modernized Target Acquisition Designation Sight / Pilot Night Vision System (MTADS/PNVS) which incorporates a new infrared laser that allows for easier target designation and enhanced infrared imagery which blends both infrared and night vision capabilities. The helicopter is also fitted with the Small Tactical Terminal radio that includes the LINK 16 capability required to communicate in a joint environment. Its updated Fire Control Radar has the ability to operate in a maritime mode, enabling the Apache to be an integral asset in most environments.

Another key improvement of the AH-64E is its Manned-Unmanned Teaming (MUMT) ability, which allows the crew of the helicopter to receive video footage and information gathered by Unmanned Aerial Systems (UAS) and display them in the cockpit. AH-64Es are fitted with the UAS Tactical Common Data Link Assembly (UTA) that features MUMT Level of Interoperability (MUMT LOI) 3 and 4 and is compatible with non-Tactical Common Data Link (TCDL) equipped UAS. But the crew does not only get access to the data generated by the UAS, it can also control its sensors and direct its flight path. The system has an effective range of more than 50km and also allows transmittal of data to another AH-64E or even to ground forces, if they are equipped with the One Station Remote Video Terminal (OSRVT). For the Apache aircrews MUNT LOI 3 and 4 mean increased situational awareness, earlier identification of possible targets, net-centric interoperability with significantly reduced sensor-to-shooter timelines and increased survivability, as they are exposed to hostile fire only for a minimum of time.

The AH-64E Apache Guardian also features more powerful T700-GE-701D engines with upgraded face gear transmission to accommodate more power and new longer composite main rotor blades. As a result of this the aircraft can reach a maximum combat mission speed of 164 knots, about 20 knots more than the AH-64D. It has a combat range of 260 nautical miles and an endurance of 150 minutes. The maximum gross weight of the AH-64E is 20,600 pounds. In addition to its 30 mm M230 Chain Gun with a combat load of up to 1,200 rounds the AH-64E can be equipped with up to 16 AGM-114 Hellfire missiles or 2.75-inch rocket pods containing up to 76 unguided rockets, or a mix of both weapon systems.

ATLANTIC RESOLVE Aviation Rotation: Operation ATLANTIC RESOLVE was launched by the USA as a reassurance measure for its European allies in the wake of Russia’s 2014 intervention in Ukraine and the annexation of the Crimea, and as a demonstration of continued US commitment to the collective security of NATO and to enduring peace and stability in Europe. Under Operation ATLANTIC RESOLVE forces based in the USA rotate to Europe for a duration of approximately nine months. Currently the Operation ATLANTIC RESOLVE rotations number about 7,000 troops and consist of a Division Headquarters (Forward) as well as an Aviation, Armored and Sustainment Task Force. During their rotations the deployed units participate in bilateral, joint and multinational training activities and exercises in countries across central and eastern Europe, primarily in Bulgaria, Czech Republic, Estonia, Germany, Hungary, Latvia, Lithuania, Norway, Poland, Romania and Slovakia.

Since the 15th of December 202,1 under its eight rotation, the Aviation Task Force role of Operation ATLANTIC RESOLVE has been inherited by the Fort Hood, Texas, based 1st Air Cavalry Brigade ‘Air Cav’ of the 1st Cavalry Division. This brigade took the role over from the 1st Combat Aviation Brigade (1CAB) ‘Demon Brigade’, 1st Infantry Division, which is usually based at Fort Riley, Kansas. It is the second time, after 2017/2018, that the 1st Air Cavalry Brigade deployed to Germany under Operation ATLANTIC RESOLVE. Under the current deployment some 2,000 troops of the brigade with 25 AH-64E Apache Guardian attack helicopters, 35 UH-60L Black Hawk utility helicopters, 15 HH-60M Black Hawk MEDEVAC helicopters and ten CH-47F Chinook transport helicopters moved to Europe. In addition about 1,000 ground vehicles belong to the force.

The Aviation Task Force includes assets of all units of the 1st Air Cavalry Brigade. The brigade itself consists of the following units:

During its rotation the Aviation Task Force provided by the 1st Air Cavalry Brigade operates out of the Storck Barracks in Illesheim, a municipality in the district Neustadt (Aisch) – Bad Windsheim in Bavaria in southern Germany.