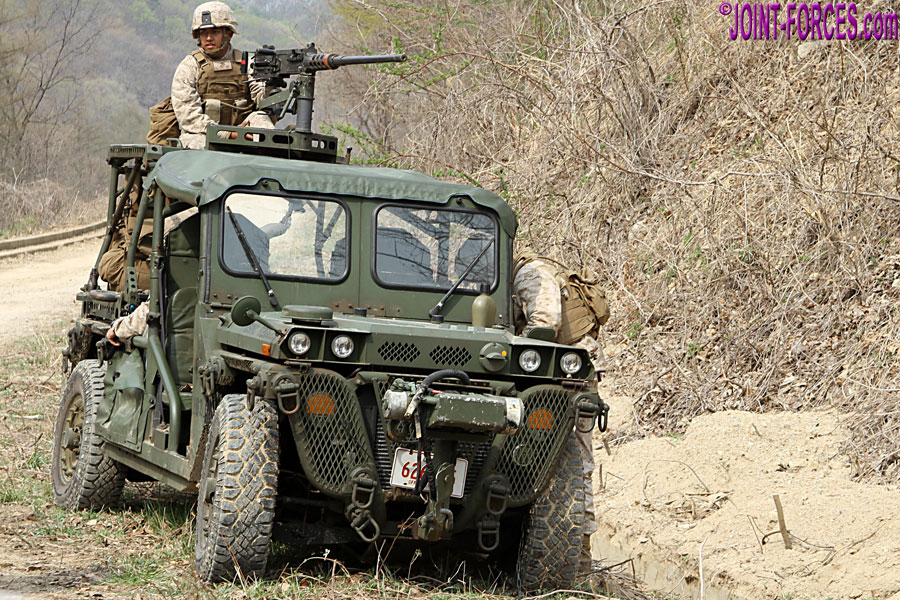 This ITV-LSV armed with a .50cal M2HB machine gun is being used at a vehicle checkpoint ~ note the self-recovery winch with 9,500-pound capacity mounted on the front of the light 4x4 vehicle [© GA]

The M1161 GROWLER, along with its M1163 Prime Mover variant, was an ITV or Internally Transportable Vehicle produced for the US Marine Corps.

Our recent mini-series on the Polaris MRZR, which in addition to being used by the US Army and USSOCOM was also procured by the US Marines in 2016 as the UTV or Utility Task Vehicle, prompted reader questions about the M1161 GROWLER ITV.

Bulk manufactured between 2004 and 2010 to meet a specific 1999 US Marine Corps requirement for an Internally Transportable Vehicle which could be flown inside the MV-22 Osprey tiltrotor aircraft, the GROWLER fully entered service in 2009 but was cast a decade later when the MRZR replaced it. A few years ago Gordon Arthur had the opportunity to photograph both the USMC M1161 GROWLER ITV and its less numerous M1163 Prime Mover variant in the field in South Korea during the bilateral Exercise SSANG YONG (DOUBLE DRAGON) 2014. The remainder of this article is based primarily on Gordon’s original report, which appeared in early 2015 in the old COMBAT & SURVIVAL Magazine:~

In 2014 the Internally Transportable Vehicle (ITV) was the latest generation in a series of fast attack vehicles used by the United States Marine Corps, reported Gordon Arthur. Its immediate predecessor was the Interim Fast Attack Vehicle (IFAV) based on a Mercedes-Benz G-wagen 290GTD, a type used by the USMC since 1999, and before that the USMC utilised the M151A2 FAV of the MUTT family.

The key design factor for the ITV 4×4 family was the ability to operate in conjunction with the Bell Boeing V-22 Osprey tilt-rotor aircraft. As its name suggests, it was designed to fit inside the Osprey so it could provide the USMC with superior mobility. In addition, the ITV could be transported inside the CH-53E Super Stallion helicopter fleet also operated by the USMC.

The ITV family consisted of two variants; the M1161 Light Strike Vehicle and M1163 Prime Mover. General Dynamics Ordnance and Tactical Systems (GD-OTS) was awarded an initial US$18.2 million contract in 2004 for system development and demonstration following a competition for this new vehicle. The resulting vehicle was often called the GROWLER due to the fact that it was produced by the US company American Growler Inc. The ITV was scheduled for full-rate production in 2007, but the project experienced soaring costs and delays. In fact, the GROWLER’s unit price rose 120% to $209,000. The first low-rate initial production units were only handed over in late 2007 and full-rate production was approved the following year.

While the ITV looks vaguely similar to a MUTT, it is considerably more advanced in terms of technology. For example, it possesses a central tyre inflation system (CTIS) and a touch-button ride height adjustment system (with three height levels). Other features were four-wheel steering; an important aid when manoeuvring in tight spaces aboard ships, or embarking/disembarking helicopters. The vehicle ran on run-flat inserts, allowing it to continue driving for up to 30km even with a flat tyre. It was powered by a Navistar 4-cylinder, 2.8-litre diesel engine. The turbocharged 132hp unit was coupled to a four-speed 4L70E automatic transmission produced by General Motors.

The USMC fielded its first ITVs in January 2009, and by August 2011 the Corps had received 209 M1161s and 102 M1163s. Originally some 694 GROWLERs were to be delivered, though deliveries would fall short of this amount due to budgetary pressure. The ITV did not offer crewmen or passengers any armour protection except for their Kevlar fragmentation-resistant seats.

M1161 Light Strike Vehicle: We can now explore the two ITV members in more detail. The M1161, a reconnaissance / fast attack vehicle, was known as the Light Strike Vehicle (LSV). The Marine Corps Systems Command (MCSC) describes it as “a high-mobility, weapon-capable platform to support a variety of operations such as reconnaissance, raids, tactical recovery of aircraft and personnel and airfield seizure”. The LSV could accommodate four Marines, and a weapons ring mount was fitted over the rear compartment. The vehicle could be easily inserted behind enemy lines by air, making it well suited for medium- to long-range reconnaissance missions.

For silent-watch applications, the GROWLER had an alternator/battery power management system able to supply a man-pack radio with power for up to four hours. This prevented the vehicle’s batteries from being drained.

Demonstrating the platform’s innovative qualities, Growler obtained three patents for the M1161. One of these covered the collapsible roll-cage, which could be completely removed to lower the profile of the vehicle to meet height requirements for loading inside the MV-22. This roll-cage feature also permitted vehicles to be stacked ~ something that might be desirable in the narrow confines of a ship hold, for instance.

M1163 Prime Mover: The M1163 Prime Mover, a short wheelbase version of the M1161, was a crucial part of the Expeditionary Fire Support System (EFSS) designed to give the USMC an indirect-fire capability that bridged a broad gap between the M252 81mm mortar and M777A2 155mm lightweight towed howitzer. This small and light EFSS supported over-the-horizon amphibious or other expeditionary operations, for which the USMC is famous.

The M1163 is basically a glorified tug. It is very compact, accommodating just two Marines in the cab. The ammunition trailer, equipped with electric brakes, carries 30 spare rounds for the 120mm mortar in insensitive munition-compliant packaging. The trailer has a single axle and, when fully loaded, it weighs 1,588kg.

The Future In 2015: We spoke to Marines to gain user opinions on the ITV, and some of the feedback was that the vehicle was not mechanically reliable and often required unscheduled maintenance. Even though the ITV had not been around that long, with an anticipated ten-year life of type its replacement was already in the works.

The Marine Corps Warfighting Laboratory (MCWL) issued a Request for Information (RfI) in November 2014 for candidates for the newest ITV Replacement (ITV-R) programme. The MCWL asked for submissions encompassing either commercially available ITVs or all-terrain vehicles (ATV) capable of being carried internally inside USMC aircraft and helicopters. This RfI, which closed in January 2015, stated: “It is anticipated that some ATVs may meet many of the listed requirements and therefore ATVs are included as possible candidate vehicles for response to this RfI.”

The MCWL expected to conduct a limited technical assessment of potential vehicle solutions in July 2015 and, as we now know, the Corps signed a contract with in November 2016 for the supply of the diesel-powered Polaris MRZR-D4 to replace the GROWLER.

M327 120mm Mortar: The mortar with rifled barrel towed behind the M1163 in 2014 was designated the M327 and was based on the TDA MO 120 RT design from France. It could fire both smoothbore and rifled insensitive munitions produced by GD-OTS. The ammunition types included high explosive (range of 8,200m), illumination (7,000m), practice and smoke. Electronically set fuses allowed either point detonation or airburst effects.