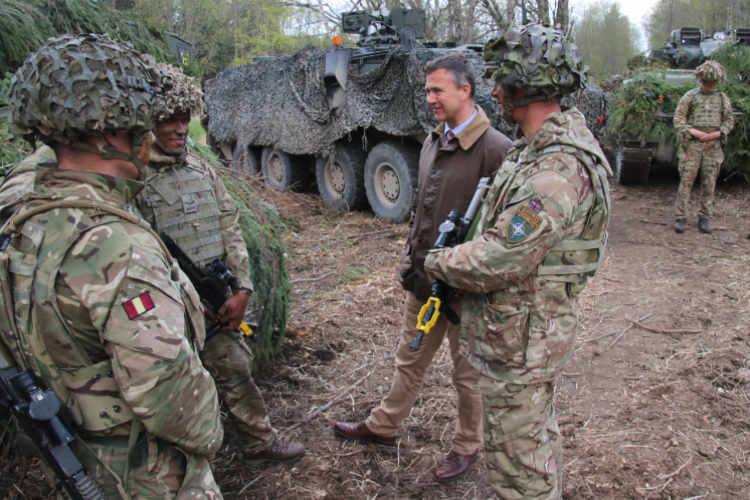 The UK Armed Forces Minister, Mark Lancaster, has met some of the 1,000 UK personnel based in Estonia on Operation CABRIT and the NATO eFP mission.

The Minister visited Royal Air Force Typhoons patrolling Baltic skies as part of the Alliance’s Baltic Air Policing mission, met with British Army personnel contributing to the NATO enhanced Forward Presence (eFP) battlegroup and flew in one of the Wildcat helicopters recently deployed to Estonia alongside Apache helicopters as part of the UK’s recent uplift in military assets.

Armed Forces Minister Mark Lancaster said: “The blue, black and white of Estonian flag is said to represent the Baltic sea, its forest soil and its open skies. Our commitment to Estonia is resolute and this year our sailors, soldiers and airmen will work side by side with our Estonian allies providing vital deterrence and reassurance at sea, on land and in the sky.”

On his visit, the Armed Forces Minister also had the chance to witness the Estonian Defence Forces and NATO soldiers training together on Exercise SPRING STORM [KEVADTORM], a major Estonian-led exercise featuring 10,000 personnel. Soldiers from France [sic] joined the King’s Royal Hussars and Estonian troops as part of UK-led eFP battlegroup.

The UK’s leading role in NATO and its support to the Baltic region will be further bolstered this week when HMS Westminster arrives as part of the NATO Standing Maritime Group 1. Further Royal Navy deployments will take place this summer during BALTIC PROTECTOR, a Joint Expeditionary Force (JEF) deployment that will see some 3,000 troops and 20 vessels from JEF partner nations exercise with each other in the region.

Editor’s Comments: 1] Although the incoming French eFP contribution is indeed in-theatre it was the outgoing Belgian contingent who participated on KEVADTORM 2019. 2] The colours of the current Estonian flag are said to represent vivid blue sky over dark forest background and snow-covered foreground.