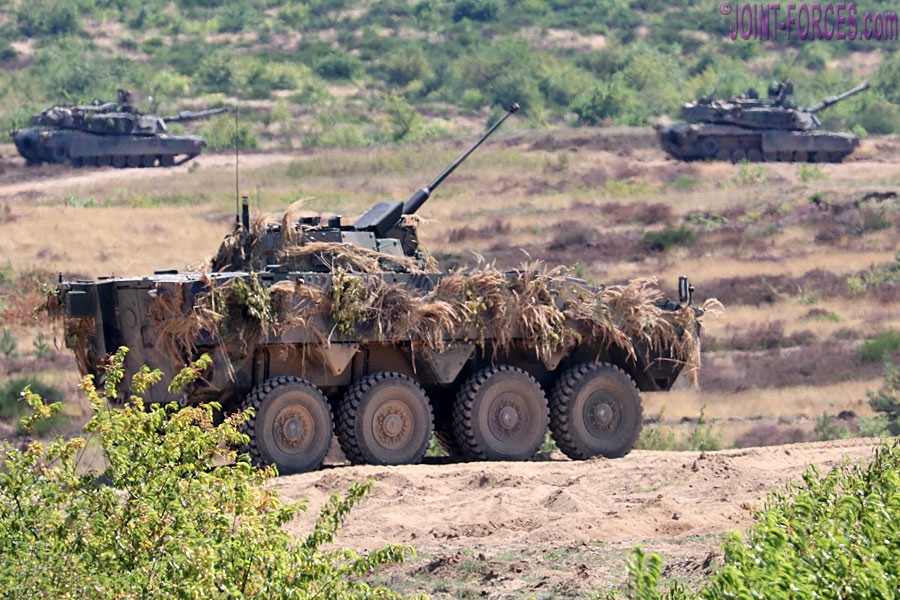 Polish Armour from 17 WBZ deployed alongside the US Army contingents on ATLANTIC RESOLVE 6 and the DEF20 Phase II at Drawsko Pomorskie (DPTA), reports Bob Morrison.

In this concluding part of my trilogy of articles on the COVID-delayed and subsequently truncated live fire phase of the DEFENDER-Europe 20 (DEF 20) manoeuvres on the Bucierz Range at Drawsko Pomorskie Training Area (DPTA) in Poland I now turn my attention to 17 Wielkopolska Brygada Zmechanizowana (17 Greater Poland Mechanised Brigade) who worked closely with the two US Army armoured formations deployed from the Continental United States (CONUS) earlier this year.

The primary task of US units deployed on both the ATLANTIC RESOLVE 6 rotational deployment and the smaller EDRE (Emergency Deployment Readiness Exercise) was to conduct bilateral, joint and multinational training events in the USAREUR (US Army Europe) Areas of Operation, with their mission being to “focus on strengthening bonds between allies and partners, increasing interoperability and building readiness.” They achieved this in Poland by integrating units from 17th Mechanised Brigade into their Armoured Brigade Combat Teams for battalion-level live-fire exercises on the massive Bucierz Range, where both artillery and aviation assets were able to support the battle runs by the tank and mechanised infantry formations.

Based in the town of Międzyrzecz in Western Poland, about 165km or 100 miles due east of Berlin in the historic Wielkopolska (Greater Poland or Older Poland) region, 17th Mechanised Brigade (17 WBZ) was established in 1996. Currently its primary components are:-

The brigade was the first to re-equip with the KTO (Kołowy Transporter Opancerzony or Wheeled Armoured Transporter) Rosomak (Wolverine or Glutton) which is a licence-built variant of the Finnish Patria AMV 8×8 Armoured Modular Vehicle. Over 850 Rosomaks are currently in service with Poland, in several variants, with the Infantry Fighting Vehicle version equipped with a 30mm Hitfist turret believed to be the most numerous used by 17 WBZ. Crewed by three – driver, commander, and gunner – the IFV can transport up to eight infantry dismounts in the rear. The primary armament in the vehicle’s Italian Oto Melara turret is a 30 mm ATK Mk 44 Bushmaster II autocannon or chain gun and there is also a coaxial 7.62mm machinegun.

With a combat weight of 24 tonnes, the Rosomak IFV has a top road speed of 100km/hr and a range of 800km. Trench crossing ability is 2,000mm, obstacle height is 700mm, and fording depth is 1,500mm; though the base vehicle is also amphibious, powered by small propellers at the rear. Overall dimensions are given by the Polish MoD as being 8,200mm by 2,900mm wide, with 2,500mm track, and a height of 3,280mm (presumably to top of hull). Although there are eight crew seats in the main compartment, Polish MoD data sheets suggest six dismounts might now be the norm. An appliqué armour package can further increase protection levels.

The KTO Rosomak M120K ‘Rak’ is a self-propelled mortar variant providing primarily indirect fire support, though it also has direct fire capability, to the infantry companies with the turret-mounted 120mm mortar and its crew travelling in a vehicle which closely matches the Infantry Fighting Vehicle versions in off-road and on-road performance. Crewed by four, the weapon has a maximum range of around 10,000 metres and can be brought out of action and redeployed to a new fire position in just 15 seconds, then brought into action again in under 30 seconds. Rate of fire is six to eight rounds per minute. This variant is not amphibious.

Other Rosomak variants spotted with 17 WBZ on Bucierz Range in August included the WRT, WEM and WD. The Wóz Rozpoznania Technicznego or Technical Reconnaissance Vehicle is a recovery and repair vehicle used by the equivalent of British Army REME Light Air Detachments; although not obvious from the photos, it has a small HIAB crane on the roof (see Armour Focus ~ KTO Rosomak 8×8 for photos) and a penthouse can be attached at the rear to give a field workshop. The Wóz Ewakuacji Medycznej or Medical Evacuation Vehicle can transport a combination of up to three stretcher and four seated patients; it has a higher rear compartment than the IFV. Finally the Wóz Dowodzenia is the Command Vehicle version and it too has a higher rear compartment roof.

Other Rosomak variants exist, including armoured personnel carriers without Hitfist turrets, artillery command vehicles, and anti-armour team vehicles, but I did not spot any of these with 17 WBZ at Drawsko Pomorskie. A self-propelled tank destroyer (Ottokar-Brzoza) version is also out to tender at time of writing.

As I have previously snapped KTO Rosomaks on field exercises in Poland and Lithuania I have plenty more photos which might be of interest to our armoured vehicle enthusiasts and military vehicle modeller readers, so once I have a little spare time I will try to delve back into my archives and produce a follow-up feature on this interesting and seemingly well-liked 8×8 IFV.