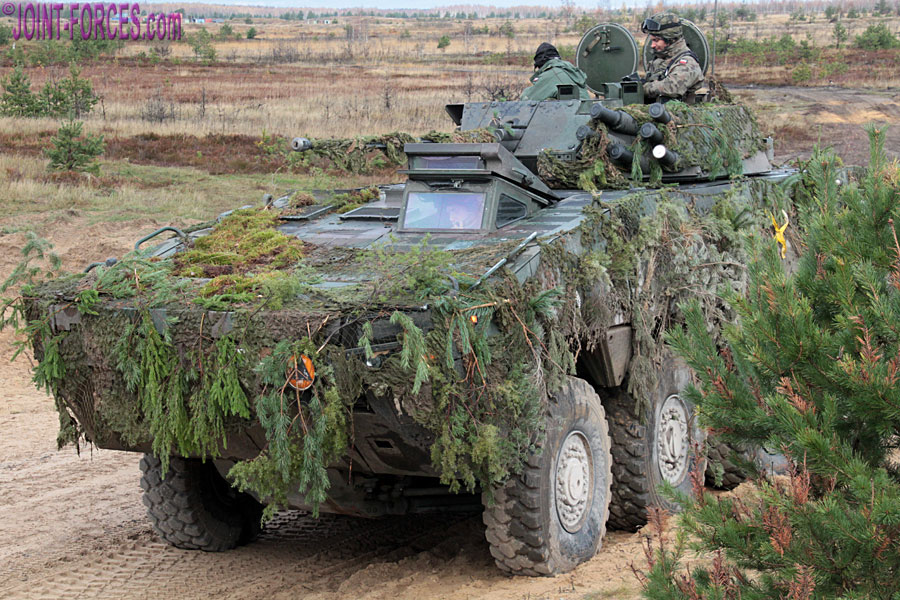 Following on from my Polish Armour On Bucierz Range feature, as promised I have delved into our archives for more KTO Rosomak images, writes Bob Morrison.

Five years ago I penned a magazine article on the wheeled armoured personnel carrier used primarily by the mechanised infantry battalions of the Polish Armed Forces illustrated by photographs taken in the field in western and north-western Poland during exercises in 2014 and 2015, then in 2017 I had the chance to photograph more Polish vehicles acting as Yellow Forces during a multinational exercise in Latvia. Shortly after my article went to print my colleague Carl was able to photograph different Rosomak variants on Bemowo Piskie Training Area in north-eastern Poland and last summer he photographed another variant at the 2019 Armed Forces Day parade in Katowice.

To allow military vehicle enthusiasts and military modellers to see all sides of each vehicle, wherever possible we have provided at least two (usually diagonally opposite) views of our subjects. Of course this has not always been possible, particularly when vehicles were displayed close together or were on parade. Carl and I always do our best to walk round interesting vehicles and take pictures whenever feasible, so hopefully the accompanying shots together with those used in my previous article will give interested readers a reasonable overview of the KTO Rosomak.

Brief History: A replacement for the Cold War era tracked BMP-1, known as the BWP-1 in Polish service, the infantry fighting vehicle version of the Rosomak is primarily, but not exclusively, used by the 12th,15th, and 17th Mechanised Infantry Brigades plus the 21st Podhale Rifle Brigade, which is a Mountain Infantry formation based near the western Carpathians. Several specialist variants are also used by units and formations supporting these brigades.

The Kołowy Transporter Opancerzony or (Wheeled Armoured Transporter) Rosomak (Wolverine or Glutton) is a licence-built version of the Finnish Patria AMV (Armoured Modular Vehicle) which was developed “to provide optimal modularity of components and to be adaptable for a wide range of versions without changing basic vehicle systems”. The Polish Army was the first external customer for the Patria AMV but a number of design differences were incorporated from the outset to meet Polish requirements.

Compared to the standard AMV, KTO Rosomak armour protection was slightly reduced to both assist with amphibious capability and reduce overall weight to ensure the vehicle was transportable by C-130 Hercules aircraft. However an appliqué armour package was also developed to increase protection level when necessary and for operational reasons linked to the ISAF deployment some vehicles, designated M1M variants, were up-armoured and subsequently lost their amphibious propulsion capability.

A substantial fleet of Rosomaks, probably in excess of one hundred, was deployed by the Polish Army serving in Afghanistan as part of ISAF (International Security and Assistance Force) and at least 16 were also deployed to Chad to assist on MINURCAT, the United Nations Mission in the Central African Republic and Chad. The majority of the Rosomak fleet deployed to Afghanistan was first upgraded with a steel-composite armour package and then protected against rocket propelled grenades with QinetiQ Q-Net panels. While serving with ISAF the Rosomak earned a seemingly well-deserved reputation for both reliability under severe conditions and survivability against both RPG and IED attack; reportedly the only Polish soldier to die as a result of an IED attack in Afghanistan was killed when the vehicle rolled over on him rather than from blast injuries.