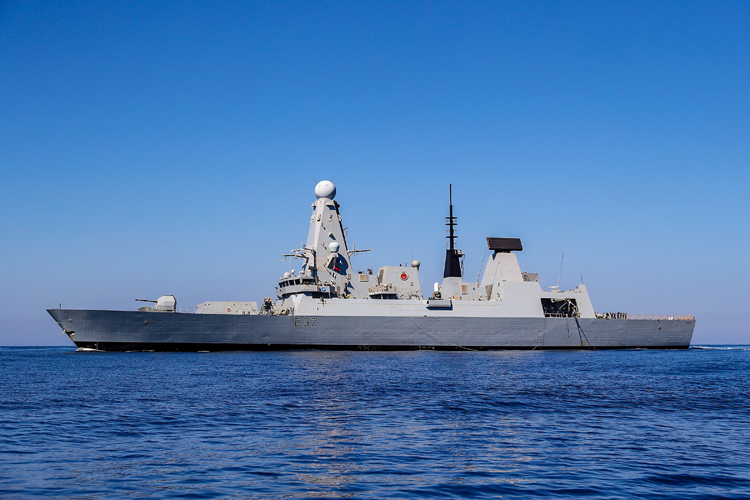 HMS Duncan has arrived in the Gulf where she will support the safe passage of British-flagged ships through the Strait of Hormuz along with HMS Montrose.

UK MoD News Release, 28 July 2019: Freedom of navigation is crucial for the global trading system and world economy, and the Government has committed to doing all it can to defend it. Last week the Government confirmed that the Royal Navy has been tasked to accompany British-flagged ships through the Strait, to provide reassurance to the shipping industry.

The Type 45 Destroyer, HMS Duncan, will work with the Type 23 Frigate HMS Montrose until she comes off duty in late August, ensuring the continuous availability of ships to accompany merchant vessels.

Defence Secretary Ben Wallace said:“Freedom of Navigation in the Strait of Hormuz is vital not just to the UK, but also our international partners and allies. Merchant ships must be free to travel lawfully and trade safely, anywhere in the world. I’m pleased that HMS Duncan will continue HMS Montrose’s fine work in helping to secure this essential route.

“While we continue to push for a diplomatic resolution that will make this possible again without military accompaniment, the Royal Navy will continue to provide a safeguard for UK vessels until this is the reality.”

Secretary of State for Transport Grant Shapps said: “The security of British-flagged ships is our priority, and we continue to work to de-escalate the situation with Iran following the unacceptable and illegal seizure of the Stena Impero.

“Freedom of navigation is in the interest of every nation, which is why we have advised British-flagged ships that they will be provided with a military accompaniment to ensure the safety of trade in the region.”

HMS Montrose covers an operating area of some 19,000 nautical miles. She has so far escorted 35 merchant vessels through the Strait during 20 separate transits, travelling 6,200 nautical miles in the process. Later in the year, another Type 23 Frigate, HMS Kent, will take over this tasking from HMS Duncan. HMS Montrose will remain stationed in the Middle East until 2022 as part of the Royal Navy’s permanent presence in the Middle East.

Operation KIPION, the operational name for UK forces in the region, is our commitment to promoting peace and stability as well as ensuring the safe flow of trade, and countering narcotics and piracy. The UK has a long-standing maritime presence in the Gulf and the Indian Ocean. For almost 40 years, units of both the Royal Navy and the Royal Fleet Auxiliary have maintained a constant presence in the Gulf.