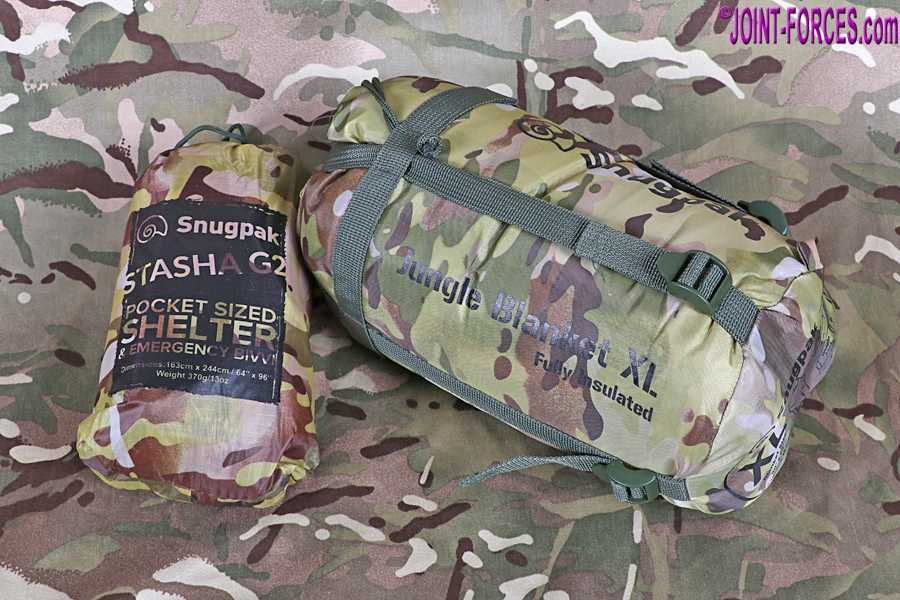 A short explanation before we look at Snugpak Terrain Pattern: Crye Precision’s MultiCam camouflage pattern, a commercial camo design which evolved out of a cusp of the millennium US Army programme to find a universal camouflage, is widely worn by many armies (or their Special Operations Forces components) around the globe; indeed even British MTP (Multi-Terrain Pattern) is a licensed hybrid variation of MultiCam and Royal Marines Commandos have adopted uniforms Crye’s camo pattern in a bid to emphasise their separate role from the British Army. However as MTP and MC are near fully compatible, one has to wonder if the expense of supposedly looking different was really worth it bearing in mind that some specialist Army units have been photographed also wearing Crye uniforms.

MultiCam being a licensed design, which the intellectual property rights (IPR) owners try to keep a very tight rein on, means a not inconsiderable premium has to be paid on every yard / metre of fabric sourced and as a result garments and load carriage equipment etc. using this camo pattern are invariably more expensive than those using patterns which were not internationally registered and patented. Of course a few governments with a reputation for ignoring the rules are content to have uniforms etc. made out of, often nationally produced, fabrics in a camo which is a direct copy of the highly successful American design, so there are plenty of MultiCam copycats to be spotted. A few years back one European manufacturer tried to get around the IPR issue by copying the pattern repeat but redesigning a small area, which resulted in a legal challenge, though most North American and European manufacturers accept the additional cost of using a genuine pattern and reflect this in the final price to the customer.

Out friends at Snugpak offer Genuine MultiCam as an option for more than twenty products in their range of high quality insulated garments and sleeping bags, but for a dozen of their range of accessories and sleeping bags which do not need to meet full military specifications they now offer Terrain Pattern as an alternative. This camo pattern is compatible with MultiCam and MTP, and with the current US Army OCP, but it is not a copycat; it merely mimics the basics of the Crye camo without copying any of the pattern and no licence fee needs to be paid on every metre of fabric used the cost to the end user is lower.

I have been trying out a couple of Snugpak accessories in Terrain Pattern, the Jungle Blanket and the STASHA G2, for a few weeks now and when Ramilla and I grabbed a five-day break in Andalucia earlier this month (our first trip abroad since December 2019 and my first chance to relax since the outbreak of COVID-19 eighteen months ago) we took both with us. The Jungle Blanket, as its name suggests, is a lightweight insulated duvet for when travelling in warmer climes where the temperature at night may drop considerably, and the STASHA G2 (i.e. Second Generation) is a lightweight basha that when rolled will fit into a utility pouch or cargo pocket. In Spain, however, we used them primarily as a padded groundsheet and sun / wind screen on the beach; on the Costa Tropical the beaches are shingle so not as comfortable to sunbathe on as sand and in October they can be a little breezy too as an onshore wind blows over from North Africa.

Starting with the Snugpak Jungle Blanket, this is a simple rectangular 100% polyester ‘quilt’ with a windproof and water-repellent Micro Diamond outer in Terrain Pattern, Snugpak’s Travelsoft insulation, and a Paratex Antibacterial inner in a sandy shade. Two sizes are available ~ Standard measures 163x193cm or 64×76″ and Extra Large measures 224x183cm or 88×72″ ~ and the latter, which I opted for, packs down to just 25cm x 15cm diameter or 10x 6″ when returned to its Terrain Pattern stuff-sack. Black and Olive versions are also produced if Terrain Pattern is not for you. Pack weight is just 700g or 25oz for Standard and 900g or 32oz for XL. When on the move I carry mine slung from the kip mat straps of my Source Assault 20L daysack.

Turning now to the Snugpak STASHA G2, this is the Yorkshire company’s latest take on the British military basha as is intended as a lightweight and compact personal shelter; though as press studs are incorporated along the long sides, two can be attached to give a rudimentary two-man tent, or one can be used envelope-style as an emergency bivvy bag. The standard configuration is to run paracord between two trees (or other suitable anchor points) and then drape the Stasha over this in conventional ridge tent style, pegging down the long edges using the two corner and two side anchor tapes on each half, but alternatively it can be turned through 90° and paracord attached to the side tapes to form a shorter but lower profile tent in windy conditions. As I am a short@rse, the low profile alternative suits me but if you are as tall as my 1.95m son-in-law the conventional ridge tent layout would provide more shelter.

Manufactured from 210T Polyester Rip-Stop PU 2000MM Anti-UV30 fabric, the STASHA G2 measures 244x163cm or 96×64″ and weighs 370g or 13oz in basic format. However it is also possible to order it with lengths of paracord and two stuff-sacks (one for paracord and adjusters and one for the whole kit) and in this configuration it weighs just 450g and measures 21x8x10cm or roughly 8x3x4″ making it truly pocket-sized; it will just fit in a standard Utility Pouch, but I carry mine in a slightly longer pouch from British Tactical as this allows me to also carry half a dozen nylon tent pegs. The STASHA G2 also available in Olive.

In the accompanying photos the Terrain Pattern items are near brand new, whereas my daysack and the MTP bergen cover they are photographed with are both faded through years of exposure to bright sunlight, so they do tend to look a little bit bright in comparison but I am sure this will soon dull down with a little bit of weather exposure. The less expensive camo does, however, blend in surprisingly well from a distance. Be aware, however, that Terrain Pattern does not have the same IRR properties as full military specification Genuine MultiCam or UK Forces MTP garments and load carriage equipment.