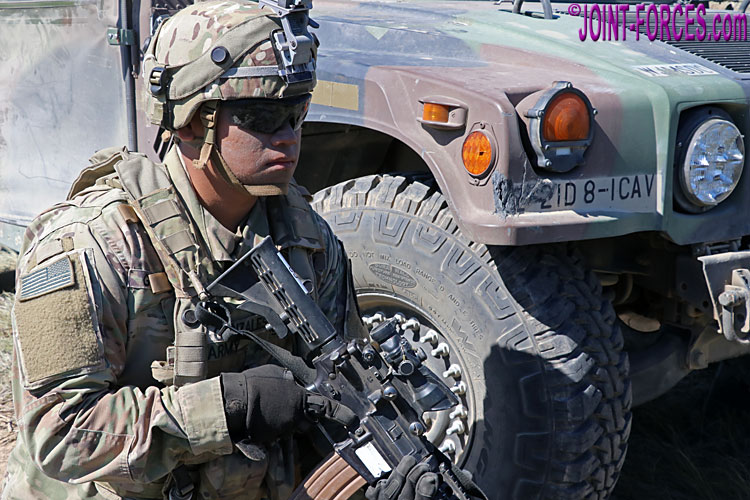 In this third feature on Modern US Army camo we look at the latest Operational Camouflage Pattern, announced in 2014 and now on widespread issue, writes Bob Morrison.

The focus soldier in this feature was serving with 2nd Infantry Division during Exercise BAYONET FOCUS held on the Yakima Training Area in Washington State as the Live Collective Training Event (CTE) of the JOINT WARFIGHTING ASSESSMENT 2019 at the end of April.

Although over the last three decades I have photographed US Army soldiers from many formations deployed to both Europe and parts of the Arab World, JWA19 was my first chance to photograph troops on CONUS (Continental United States) since 1996, so it was a bit of a bonus that this soldier was wearing the very latest Operational Camouflage Pattern, or OCP, Army Combat Uniform.

In the two previous features in this trilogy, plus the prequel article where I published comparison images of camouflage fabric from shirt / blouse back panels as a point of reference, I have explained how OCP came about so I do not intend going over old ground in this feature… save to draw attention to how OCP (aka Scorpion W2) is a linear pattern and to comment on colour. If you look at the fabric panel you will see that all the shapes predominantly run horizontally, rather like French Lizard pattern of the mid-20th Century, and some camo pundits consider this to possibly be the latest American pattern’s weakness – though this is minor compared to the general unsuitability of the much disliked UCP predecessor.

The colour palette used for OCP is broadly similar to that used for OEFP / MultiCam, though to avoid any potential licensing or copyright issues it is not an exact match, and garments produced from the different camo pattern variants are so compatible that it is not uncommon to see examples of old and new being worn together in the field; though of course the difference would be noticeable with freshly laundered, smart condition garments in parade ground conditions. The actual pattern of the latest camo (Scorpion W2) is also a design variation of the original early 2000s Scorpion pattern from which the commercial MultiCam pattern evolved, so although visually very similar it is not an exact copy. I think of it as Scorpion being the mother, with MultiCam and Scorpion W2 patterns being her children, born several years apart to different fathers.

Camouflage pattern fabric, just like wallpaper, is produced in long rolls with the pattern repeating with every turn of the rollers. As the US still uses Imperial measurements, the Scorpion design and its variants are 60 inches (1524mm) wide and the pattern repeat looks to be every 25 inches (635mm). The only part of most garments which is plain enough, and sufficiently devoid of seams and pockets, to allow the pattern to be photographed is usually the back of a shirt / blouse and as few soldiers are tall enough to have a full pattern repeat on their back it is difficult for us come up with fully representative pattern photos in the field. One other thing which should probably be mentioned here is that both OEFP and OCP fabric rolls have distinctive horizontal banding of colours through the repeat, one band being darker and the other lighter, so not all eight colour shades are guaranteed to appear in a single photo of a shirt back panel; the swatch seen here is from the darker banding.

The links below should take you to the two previous parts of this Modern US Army camo pattern trilogy and the prequel:-