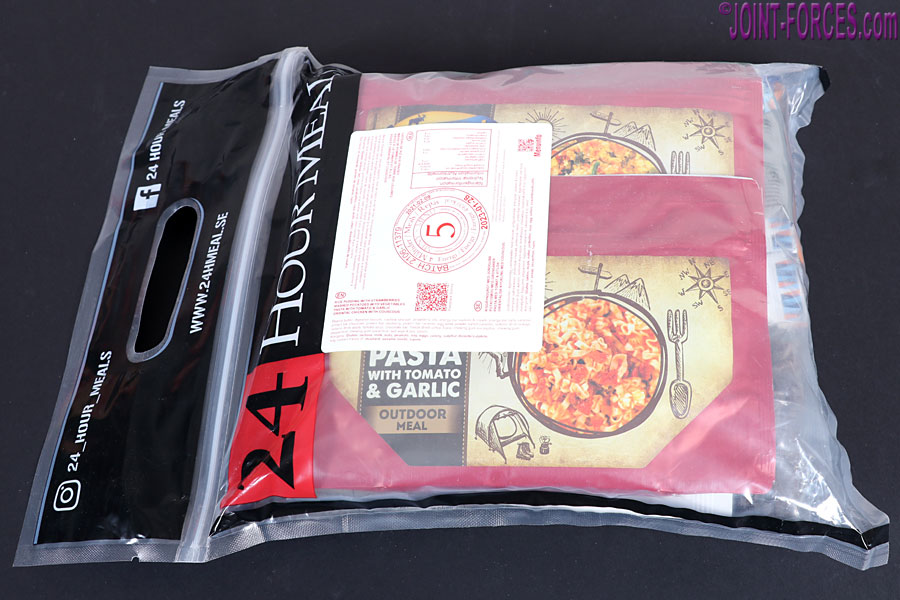 Like Carl, I have previously photographed Swedish troops on multinational exercises in Norway and Poland, but until this year Swedish ration packs eluded us both… though possibly the wait was worth it, as these days the freeze-dried main meal pouches are produced by Blå Band of Finland.

The 24-hour ration Carl sent back from Sweden was supplied by 24 HOUR MEAL of Varberg, on Sweden’s west coast, and was marked as Menu 5 on the label on the front of the resealable clear outer pack which doubled as a refuse sack. Production date was 2021-02-09 and best before date was 2023-01-28, with label languages being French and English as well as Swedish. Pack weight was just 1197g but, assuming all items were consumed, 4936kcal of energy was produced. A fair amount of fresh water was needed to reconstitute but, unlike with ‘wet ration’ retort pouches, the soldier does not need to carry this extra weight with them throughout the day as in the Northern regions where ‘dry rations’ are mostly issued there is usually an abundance of H²O.

The primary contents of Menu 5, all freeze-dried, were: Rice Pudding with Strawberries (650kcal) for breakfast; Oriental Chicken with Couscous (621kcal) for Main Meal 1; and Pasta with Tomato & Garlic (631kcal) plus 24 HOUR MEALS brand Mashed Potatoes with Vegetables (613kcal) for Main Meal 2. These four pouches alone would provide enough calories (2,515kcal) to keep the average soldier in a non-combat role working in a temperate theatre adequately fed for a day, but in the High North a combat soldier requires around double this. Additionally, unlike in other theatres, the midday meal (aka lunch) in the High North is often the largest meal of the day as once the sun goes down and the temperature plummets most needless activity stops to conserve heat.

Plenty of snacks were provided in this ration to double the overall calorie intake, and to give energy boosts between the three main meals. Swedish Menu 5 contents were: three 55g 24 HOUR MEALS brand Protein Bars (213-241kcal) in Caramel, Chocolate and Raspberry flavours; one 55g (206kcal) 24 HOUR MEALS brand Energy Bar in Salty Caramel flavour; one 50g (212kcal) OrifO brand Cereal Bar; one 50g (222kcal) pack of OrifO Digestive Biscuits; a 40g (236kcal) sachet of OrifO Peanut Butter; a 50g (157kcal) pack of Strawberry Bits; a commercial brand 35g (205kcal) pack of Cashews; and a 25g (127kcal) OrifO Chocolate Bar. There was also a 40g (140kcal) pouch of Salted Caramel flavour Egg White Powder to make a Protein Shake; not to my personal taste, but as this item is 79% protein a combat soldier should really consume it to derive maximum benefit from their ration pack contents.

On the hot drinks side, three 2g Coffee Powder sachets were included but no sugar or creamer were supplied. For cold drinks there were two 40g (75kcal) OrifO Isotonic Drink Powder sachets in Orange and Apple flavours. A 17g (56kcal) Tomato Soup Powder was also included. Accessories supplied were: four Disinfection Swabs; three twin packs of Chewing Gum in Eucalyptus, Peppermint and Spearmint flavours; and a single plastic spoon.

Most British military readers will recognise the OrifO brand items, as this Danish supplier’s products often turn up in UK Operational Ration Packs and it is not unusual to find them in other NATO rations. As for the Finnish Blå Band freeze-dried meal pouches, both Mike Gormley and I rate them very highly and Carl rates them too. When off on assignments I usually carry a couple of these with me in case I get back to my accommodation too late at nights to find anywhere to eat; I also often take an electric coil heater (treat with extreme care as they can be lethal) with me on my travels so I can heat a mug of water to make a coffee, and this also allows me to boil water to reconstitute freeze-dried ration pouches.