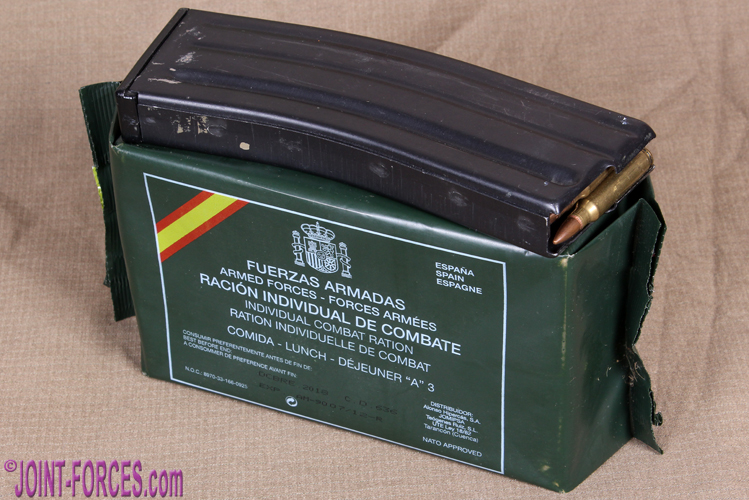 In this article on Spanish Armed Forces ration packs we are looking at the Ración Individual de Combate (RIC) or Individual Combat Ration, writes Bob Morrison.

Although I have worked with Spanish troops several times over the last few years, both in Spain and on exercise and deployment in Northern Europe, I have not been able to photograph (update ~ see bottom of page) their ration packs being prepared or consumed in the field, so no opportunity has arisen to ‘prof’ an example to taste test. In fact the last time I remember being given Spanish rations was on an ACE Mobile Force multinational deployment in Portugal way back in 1992; my fondest memory of that particular day is of sitting under the shade of an olive tree during a lull in the artillery action, enjoying a mix of German, Spanish and Portuguese rations washed down with the canned wine and beer which was included with lunch.

A one-meal pack – in this case Comida or Lunch – the Spanish Individual Combat Ration or RIC consists of a light olive drab corrugated cardboard carton inside a dark olive green plastic outer with the national colours and with white printing in three languages on the front panel. Packed by JOMIPSA of Alicante, who also supply other armies internationally as well as Humanitarian Assistance organisations, most contents are intended to be consumed warm so a heater and fuel tablets are included, but bread or biscuits are not in the pack as the Spanish Army issues these separately.

The first thing that struck me about this ration pack was its size – it can actually fit inside a small MOLLE/PALS utility pouch without squashing meaning it can be carried unopened on your belt rig if you have a free pouch. Despite its diminutive dimensions of roughly 175x110x70mm (about 7x4x3”) this ration still provides quite a substantial meal of instant soup powder, tinned starter and tinned main course, plus a 50g pot of jam is included for spreading on the separately issued bread or biscuits.

Inverted contents – they pretty much filled the carton [© BM]

Contents are not given on the outside of the pack, though a loose full contents list and instructions sheet in three languages (English, French & Spanish) is supplied under the carton lid, so it was a bit of a gamble on which of three or four different types I should choose. Luck was on my side when I picked Menu “A”3 as it contained foods I like, namely: SOPA DE POLLO CON PASTA or Chicken Soup With Pasta; 115g ATÚN BLANCO EN ACEITE VEGETAL or White Tuna In Vegetable Oil; and 300g COCIDO MADRILEÑO or Madrid-style Stew.

The soup powder needs to be reconstituted with boiling water but, rather than just tipping it into a mug and stirring, I suggest you add it to a mess tin over a fuel tablet and let it simmer for a while as the pasta shells not only need time to properly reconstitute but also trap a fair bit of powder which simmering will break down. Done this way, the results are very tasty and I found I did not need to add seasoning (which is not supplied anyway).

The tinned tuna is very oily and I drained mine then added a little chilli sauce (not supplied) to give it a kick; plenty of tissues are supplied, which is just as well as that oil gets everywhere. Cocido Madrileño is a classic, quite oily, Spanish stew made with large chickpeas which contains chorizo, cured ham, shin of beef, and fatty pork belly plus vegetables; it is traditional to be served a chunk of pork belly fat in each portion and my tin had a lump right in the centre, but I moved this to one side as I am not a great fan. Both of these tins were of the ring-pull type.

The 50g jam portion in my ration pack was CREMA DE MELOCOTÓN or Peach and it looked good through the transparent tub. I have not yet tried this, partly because no bread or biscuits were provided but also because I’m keeping it for a sunny Sunday morning. Sunday breakfast in my favourite Andalusian café usually consists of tomato paste with a hint of garlic on a split toasted torpedo roll followed by peach jam on a buttered second toasted roll washed down with café con leche and I reckon this jam should be a close match. Días felices!

There were seven green sachets in my carton, four of which were labelled POLVO ISOTÓNICO DEFATIGANTE CON VITIMINA C which seems to translate into Isotonic Energy Powder With Vitamin C. The other sachets contained 2x chewing gum tablets, toothpaste and disinfectant gel. There should also have been 2x water sterilising tablets, but these were missing; this is unsurprising as the sachet must be tiny – and yes, I did check just in case I had dropped it while opening the pack.

A flat folding heater, a pack of three hexamine tablets and a book of matches were also included, along with ten small individual tissues in a cellophane pack and the three-language contents list with instructions for both the heater and the isotonic powder daily dosage. As no eating utensils or brew pack were included, I suspect these might be in the Breakfast pack; some nations which use a three-pack system for 24-hours include accessories with the smallest meal to even out pack size.

My overall impression with this Spanish Lunch RIC, which I actually had for dinner as sitting in front of a computer screen is not sufficiently manual enough for me to burn off a heavy lunch, was pretty favourable. I could not fault it on quality and as I eat Spanish cuisine when off-the-beaten-track in Spain it was not unfamiliar on my taste-buds. Heater bent into shape with hexamine tablet in position – do not use indoors! [© BM]