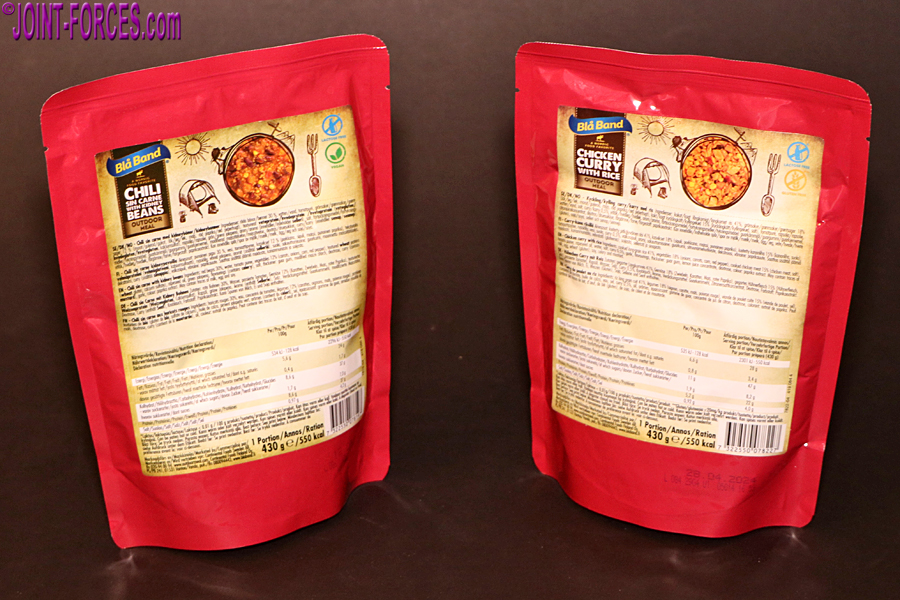 The J-F Team have been well aware of Blå Band freeze-dried meals for years but it is only recently I discovered their retort pouches, writes Bob Morrison.

While visiting the New Heights stand, importers of Swedish-produced Blå Band expedition meals, I immediately spotted that they now also had a range of retort pouch (aka ‘boil-in-the-bag’) meals on display; not being backward at coming forward, I immediately attempted to blag some samples for this column and was rewarded by the delivery of a box of four meals a couple of days ago.

Mike Gormley usually looks after Blå Brand in his Gormley’s Gear section, where you will often find these Swedish pouches in establishing shots for field cooker tests and the like, but as a family celebration prevented him attending the OTS 2021 expo and as quarantine restrictions prevented me attending the French SpecOps expo in Bordeaux over the same three-day window, I managed to short-circuit the system and get first dibs on test samples this time. As Blå Band (Blue Ribbon in English) meals are found in Finnish Field Rations, both Carl and myself have also previously tasted them… but only the freeze-dried pouches which Scandinavian and Arctic-earmarked military units favour on account of the abundance of water / snow for reconstitution plus their lighter weight.

Retort pouch meals, which are pre-cooked and only require warming, are heavier but in warmer climes where fresh water for reconstitution may not be so readily available they are more practical than freeze-dried and as they can be eaten cold if necessary or only slightly warmed (e.g. by body heat if carried inside a combat shirt) they do not require a 15-minute break to first boil water and then leave the pouch to stand for several minutes. Both types of meal therefore have their uses, but personally I prefer ‘boil-in-the-bag’.

New Heights kindly sent me two of the freeze-dried packs ~ one Outdoor Breakfast and one Outdoor Meal ~ and two of their seven retort pouch Outdoor Meals; two of which are veggie options. Personally I prefer meat-based meals, and I also believe it is my responsibility to ensure farmers have good reason to give cows / sheep / pigs etc. the chance of life, but being an omnivore I do occasionally eat plant-based meals. So when I was offered the Chilli Sin Carne (i.e. chilli without meat) with Kidney Beans as one of the two retort pouches I decided to give it a go and heated it up for dinner last night. My second pouch is a more conventional Chicken Curry With Rice, but as these are high calorific meals generating 550kcal from a 430g portion I’ve held that back for later.

According to the label, which is in five (DE, EN,FI, FR & SE) languages, this meal is both Vegan and Lactose Free. The primary contents are kidney beans (30%) and vegetables (carrots, onions, corn and red peppers) plus textured wheat proteins and modified maize starch. There is no rice, which struck me as being a little strange for a chilli dish, but it all seemed to pan out okay even though the texture was a little bit unusual. My only grumble with this meal was that it did not have much of a kick to it, and if I eat one of these again I reckon I would add some hot sauce left over from an MRE or ORP. At 550kcal, this was a really substantial meal and last night I skipped dessert for once.

This morning I tried the freeze-dried Rice Pudding With Strawberries, which is one of four Blå Band Outdoor Breakfast meals. Weighing just 145g, but generating 650kcal after reconstitution by adding 300ml of boiling water, this is a really hearty tasty breakfast and I reckon it has set me up for the rest of the day; it might even get me through to teatime, when I have Blå Band Chicken Curry With Rice retort pouch to look forward to.

Both the freeze-dried and retort pouches from this Swedish company have expanding bases which not only allow the meal to be stood up, but in the case of freeze-dried the reduce the risk of gritty powder being trapped in the corners when the mixing has not been as thorough as needed; there is nothing worse than getting to the bottom of a pouch only to find the last couple of spoonfuls have not been properly reconstituted. Freeze-dried pouches, which have an in-built zip to keep the heat in while the food is being reconstituted, are horizontal meaning it is easier to get to the bottom with a conventional spoon without getting food on your fingers. However the retort pouches are tall and thin and are best eaten using a long-handled ‘racing’ spoon if you have one. I decanted both meals for photographic illustration purposes.

Blå Band meals, of which there are currently 24 in the range, are now pretty widely available through UK outdoor and camping outlets. Retail price per meal varies from £6.50 to £7.25. Recommended.