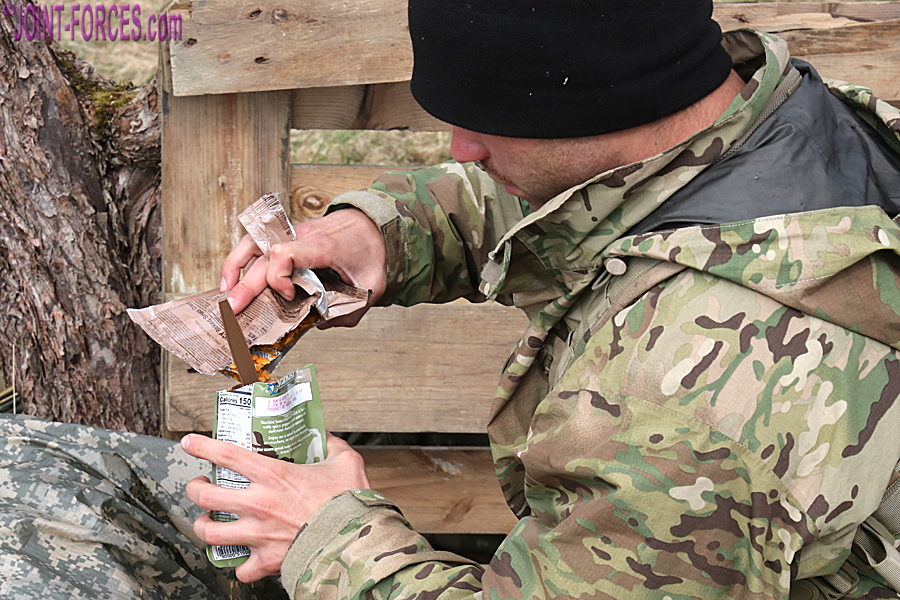 For this fourteenth article on US MRE packs ~ being a bit superstitious I try not to do thirteens ~ I have sampled a Year 40 or XL Batch menu, writes Bob Morrison.

On the Estonian leg of the recent Exercise SWIFT RESPONSE 2021 the Paratroopers from the American and British JEF (Joint Expeditionary Force) who flew across the Atlantic to parachute into Nurmsi Drop Zone were issued with 2020 production year MREs and I was able to bring a sealed example back with me to expand our US rations coverage.

Technically designated XL Batch or Year 40 as last year was the 40th year of MRE production, these 2020 individual meal rations are actually are little different from the XXXIX batch, except for the Menu 20 entrée (as Americans call a main course) being changed. Personally I think they made a mistake swapping Italian Sausage for the Hash Brown Potatoes with Bacon, which I considered to be the ideal breakfast retort pouch, but as the US Defense Logistics Agency regularly surveys the troops to see what the most and least popular meals are, usually dropping at least one entrée each production year, one has to presume that the troops voted with their palates. (Note: If the DLA has a mountain of Hash Brown Potatoes pouches going to waste somewhere I will willingly recycle them).

Out in the field during SWIFT RESPONSE 21 I spotted MREs packed by two of the three primary suppliers, SOPAKCO Inc and The Wornick Company, being consumed by the US Paras and all were of 2020 production. If you are able to see the side of the carton with the large barcode printed on it, the four-digit packing code giving the date of production (i.e. first digit is the last digit of the year and the next three denote the day of that year) should be visible.

The meal illustrated here which I was given in Estonia, on the recommendation of the NCO distributing a mountain of pouches to hungry Paras, was Menu 12 from Carton A; there are 12 menus per carton (A and B) giving 24 meal choices in total. The ELBOW MACARONI IN TOMATO SAUCE (sub-titled Coquillettes À La Sauce Tomate in French) did not sound particularly appetising to me, but several of the guys insisted that it was “really tasty” and when I eventually got around to heating and tasting it I had to agree; MREs, although they have improved considerably in recent years as soldiers’ tastes become more cosmopolitan, can sometime be a little bland but in this case the pasta sauce was very flavoursome and I didn’t actually need to add the Tabasco Sauce.

The one difference with XL Batch (the letters are the Roman numerals for 40) which I immediately spotted is that the contents of the MRE pouch are now all contained in a partially vacuum-packed clear plastic bag to stop them settling in transit; amazingly it has only taken four decades for them to work out that simple solution which better protects those more brittle contents from bumps and knocks. Hopefully no more broken biscuits (cookies) or squashed soft bakery items etc. and the outer pouch is now less likely to go teardrop shaped once out of the carton.

There were no real surprises here, other than the inner packet. I used the Snack Bread to sop up the pasta sauce and just sucked the strawberry jam out of its sachet, but I have a typical Glaswegian’s Sweet Tooth and given half the chance I would dip a deep-fried battered Mars Bar in honey for the sugar hit. In this particular case the Wet Pack Fruit was Mango and Peach Applesauce variety, which can be sucked straight from the pouch, and I reckon it was pretty tasty; alternatives are Raspberry Applesauce and Carbohydrate Enhanced Applesauce. The 1.5g freeze-dried coffee sachet was Bill’s Brew, which out of all the ration pack coffees is probably my favourite. The 280kcal Chocolate Protein Drink is not to my personal taste but won’t go to waste, as someone I know devours just about anything chocolate flavoured.

From the numbers stamped on the outer pouch, this MRE was packed by SOPAKCO on Day 196 of 2020 (i.e. 0196) or 14th July, as last year was a leap year. Edible contents were individually date stamped, mostly within a month or two prior to this.