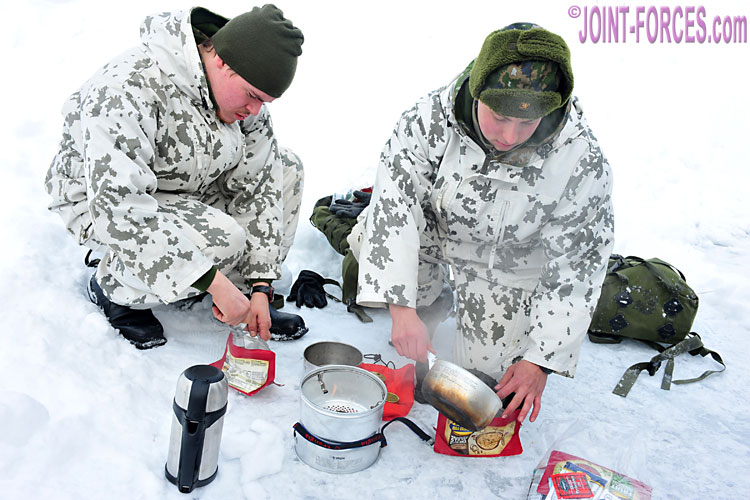 Recently I have focussed on Finland’s camo uniforms and Land Rovers so it seems rather logical to continue with a look at Finnish 24-Hour Field Rations, writes Bob Morrison.

The Finnish field ration featured here was not only one of the lightest 24-hour packs I have sampled, tipping the scales at just 1.026kg, but it also provided more energy than most equivalents, generating 4,156kcal assuming every edible component was consumed.

Carl proffed this Finnish Taistelumuonapakkaus (literal translation is Field Ration) for me while he was covering the multinational Exercise SWIFT RESPONSE 16 in Norway and I sampled it not too long after. Although high in calorific value, this ration was very light because the main meal pouches were freeze-dried, which makes sense as when at home Finns are seldom far from a freshwater lake in summer and in winter much of this Subarctic climate nation is covered by quite easily thawed snow.

Other than being freeze-dried, the contents were actually not too different from those found in a UK Forces Operational Ration Pack and I had no problem consuming them all, though as I have an issue with diabetes I had to be careful with those very tasty chocolate bars and spread each one out over a number of days. The Rice Pudding With Raspberries breakfast pouch in this particular pack was a bit unusual for my morning taste buds, but once I had plucked up the courage and eaten it I decided I would much rather have have had that than the dried muesli with milk pouches encountered in many NATO ration packs these days, and I reckoned it would be a tasty and comforting starter for the day if soldiering in near-Arctic conditions.

Most ration packs covered in this section of our website are issued to the troops in either a cardboard carton or tough opaque polythene bag, but the outer to this Finnish ration was a transparent plastic bag with much of the air extracted by vacuum to reduce the bulk. Inside I found: three resealable main course pouches weighing around 150 grammes apiece, making them about a third of the weight of a conventional retort pouch; a foil pack containing six thick slices of crispbread; a 125g tube of ham paste for the crispbread; two high quality 39g dark chocolate bars; two 60g pouches of dried nuts with crystallised fruit; a sport energy powder sachet; a hot chocolate powder sachet; a brew kit; a pack of tissues; 2x chewing gum; 4x moist wipe; and a contents list. The brew kit included 2x coffee, 2x tea, 4x creamer and 2x sugar.

The main meal pouches were produced by Finnish commercial outdoor meals supplier Blå Band, which is one of our Gear Tester Mike Gormley’s favourites and their products often feature in the background in his cooking stove reviews etc. Before penning this article I asked Mike if he had any pouches to spare as I cannot find a picture of one of these meals I have reconstituted, but unfortunately his cupboard is bare as he used them all up just before Lock-down and hasn’t yet restocked. To prepare a meal just add 300-400ml of boiling water, as per the individual pack instructions, mix well, reseal the pouch, leave standing for ten minutes, then give it a final stir… and enjoy. Calorific value for a Blå Band main meal pouch is usually 650kcal.

This particular Taistelumuonapakkaus contained the aforementioned Rice Pudding With Raspberries for breakfast, Mediterranean Pasta With Chicken for lunch, and Taco Stew for dinner. All were tasty and nutritious. The commercial brand Fruit & Nut pouch snacks, packed in Finland, were high quality and I enjoyed them, and the darkish chocolate bars were excellent too. All-in-all I really liked this ration pack, but as I was sedentary at the time and as it contained over 4,000 calories I spread it out over two days rather than one.