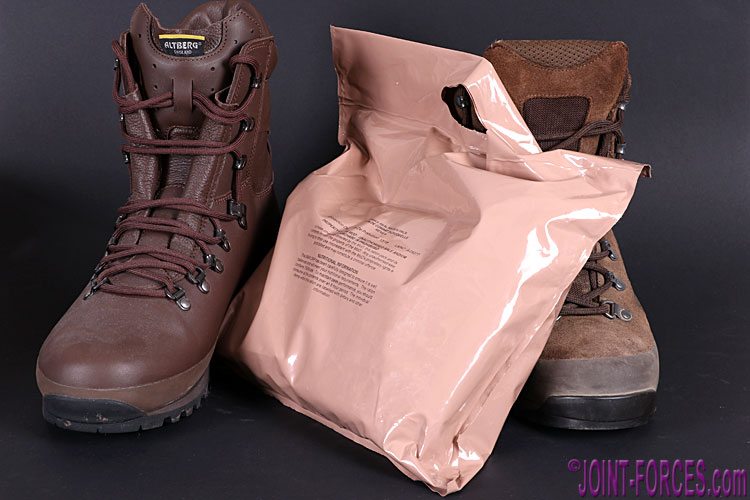 In this final part of a trilogy on current bagged, rather than boxed, UK Operational Ration Packs (ORP) I look at the 8-hour Single Meal Ration or SMR, writes Bob Morrison.

As I have already covered the basic story of how outer bags are replacing the boxes / cartons, with which many readers will have become so familiar over the last three decades, and as I have previously penned an article on an earlier 8-hour SMR, I do not plan on going back much over old ground. However while researching the bagged rations story have have uncovered a couple of new snippets which may be of interest.

We now know from published Prior Information Notice documentation for those companies wishing to tender for 24-hour UK Operational Ration Pack contracts, of which the much smaller 8-hour SMR is classified as being a variant, that annual consumption volume is approximately 1.5 million units. The SMR accounts for about 80,000 units of this ration pack total, or fractionally over 5%, so while not as rare as the Enhanced Ration Pack (ERP) covered in my previous article it is not something that most troops on exercise are likely to encounter; though if operationally deployed at a base where breakfast and evening meal are provided by military chefs or contractors, troops out in the field or on the ranges for the day might be issued with them. The SMR is also issued to some troops during training when they are away from camp for the day.

In simple terms the 8-hr SMR, as its name suggests, is intended to supply one third of a soldier’s daily nutritional requirements; the printing on the front of the tan polythene bag states it contains 1,500kcals, which is a little over one third of what a 24-hour ORP contains, but exactly one third of a 24-hour ERP contents. Inside the bag there should be a single Main Meal retort pouch, four Snacks, three powered Drinks,a Common Components bag of smaller items, and a Flameless Ration Heater. As stated on the front of the bag: “To maintain peak performance, you should consume all the contents over an 8 hour period.”

The SMR seen here was Menu 5, its Production Date was stamped as being 12/18 and its Batch Code was L8347. In my previous SMR article, FR18 published in November 2018, I looked a Menu 6 pack with the earlier L8081 batch code which was stamped PD 04/20 suggesting a packing or production date of April 2020. Now one does not need a doctorate in quantum physics to be able to figure out that I could not have opened an eaten that ration pack’s contents 18 months before they were packed, so I reckon 04/20 was actually the Expiry Date. Through comparing the Batch Numbers on all four bagged UK ORP samples I have now reviewed for this section of the website I have realised that the UK is using pretty much the same numbering system on its polythene ration bags as found on US MRE individual contents – i.e. the four numbers denote the last number of the year followed by three numbers (between 001 and 366) denoting the actual day. If I have got my sums right, L8081 therefore refers to 22nd March 2018 and L8347 refers to 18th December 2018. Both of my SMR samples are therefore from the Operational Ration Packs 2017 contract, the first to bagged rather than boxed, as the second contract awarded in September 2018 was not scheduled to commence until June 2019.

With that little bit of basic detective work out of the way, let us look at 12/18 Menu 5 SMR contents. Essentially not much different from the earlier Menu 6 from the same contract, this pack contained: 300g Meatballs & Pasta, as the main meal component; 50g Beef Jerky, Traditional BBQ flavour; 25g Oatmeal Block; 75g Tropical Fruit & Nut Mix; Cranberry (is there any other flavour) Cereal Bar; and two Fruit Flavoured Energy Powder sachets. There should also have been a sachet of Peach Flavour Iced Tea Fortified powder, but mine was missing. The Common Components, mostly contained in a Reusable Polybag, consisted of: 18g 3 in 1 Coffee; 18g 3 in 1 Tea; 10x Tissues; 1x Wet Wipe; 2x Chewing Gum tablets; a Spork and a Flameless Ration Heater. With the exception of the 3 in 1 drinks, which I am not keen on as I mostly drink black unsweetened coffee, I consumed everything else that was edible and found everything to be okay. Maybe the Meatballs & Pasta might have benefited from a dash of Hot Diggidy Dog Sauce (not included this time) but that is just me being picky as that particular main meal retort pouch is quite tasty and filling just as it comes.

Unless I manage to pick up one of the other C&E variants of the current ORP (see FR46 for an example of the Halal variants) I will probably not come back to UK bagged rations until after the Operational Ration Pack 2019 contract batch starts circulating. That might be a while yet as still in code 24-hour ORP cartons from a previous contract were being issued to troops on exercise as recently as September 2019.