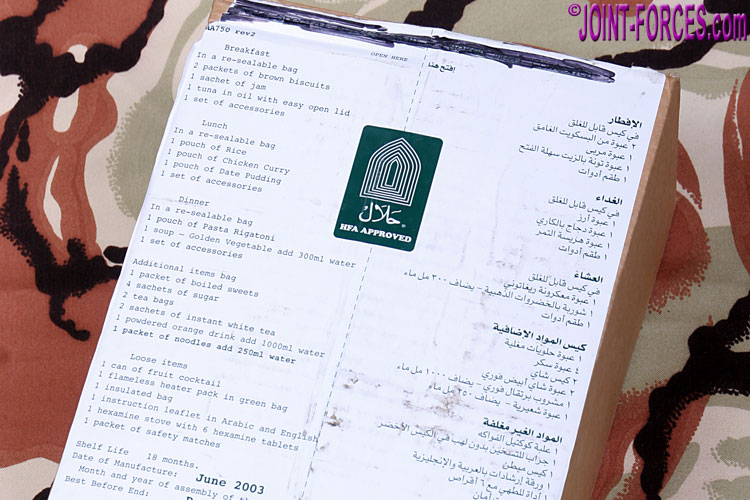 For this Field Rations article on an Omani Special Forces (SSFO) 24-hour Packed Meal from 2003 I have delved back into my archives, writes Bob Morrison.

When I first opened up this combat ration pack back in 2011 it had actually been gathering dust on a shelf for a few years, because when I acquired I was unsure precisely who its intended end-users were; only the passage of time eventually revealed their identity.

I was pretty sure that this pack was genuine issue to troops of a friendly Arab nation and was aware that the contents had been assembled in the UK, but when I tried to coax information out of the company I believed was behind its supply I came up against a brick wall; contractual non-disclosure clauses in supply contracts can be a bit of a pain. Then in mid-2011, purely by chance while discussing the US vegetarian MARC ration pack tailored specifically for Afghan and Middle East palates, one of my contacts told me how he had quite enjoyed eating Omani rations when working alongside the Sultan’s Special Forces. That’s when the penny dropped.

My contact told me that although these combat rations were Halal Approved and tailored for Arab taste buds they had a lot in common with the British 24-hour GP ORP (General Purpose Operational Ration Pack) of the day, so eating them was not a massive culture shock. Back at the start of the Twenty-first Century, just as today, the UK MoD provided Halal (and Sikh, Kosher and Vegetarian) ration options to frontline troops but, unlike the reasonable choice that is available today, back then only three different menus were available in each category and so life was a little more monotonous for those with religious dietary restrictions who had to consume only combat rations for an extended period.

Such monotony of diet was deemed unacceptable for the troops the Islamic Sultanate of Oman whose then monarch, the late Sultan Qaboos bin Said Al Said, ensured throughout his long reign (1973-2020) that not only were his country’s armed forces well trained and equipped but also that his Special Forces were among the best in the world. As a result, the Sultan’s Special Forces combat rations on issue around the time of the 2003 Gulf War were of exceptional quality; incidentally, although supportive of Gulf War 2 and a participant in the liberation of Kuwait in 1991, The Sultanate did not actually join the roughly 40-strong Coalition of nations lined up against Iraq to finally topple Saddam Hussein.

When I first acquired this sample of the Sultan’s Special Forces Oman (SSFO) Packed Meal, around September 2003 I believe, the title at the top of the label had been obliterated with black marker pen, but over time the censoring ink faded and eight years later it had become readable under bright light. On this label the contents were listed in English on the left side- presumably as Sultan Qaboos traditionally employed a reasonable number of specialist British trained military personnel in contract roles – and in Arabic on the right. The white on green version of the HFA Approved logo issued by the UK-based Halal Food Authority was prominently displayed near the top centre of the label.

Weighing 1,950g, this SSFO Packed Meal was a boxed ration pack measuring 240x180x105mm intended to sustain a fighting soldier for 24 hours. Water was required to reconstitute the soup and beverages, and to heat the main lunch and dinner courses, though if necessary these could be eaten cold, but other than water the pack contained everything a soldier in the field should have needed for sustainment for a day. Inside the box I found four resealable plastic bags containing the three meal courses and a loose items pack, a HOT PACK Flameless Ration Heater, a TRANSIMEX Warming-Up Set, Heater Pack Instructions in both English and Arabic, a white padded bag for holding the dinner retort pouches inside the HOT PACK when heating, and a small tin of fruit cocktail.

Starting with Breakfast, the menu option I acquired included an 80g easy open tin of Tuna in Vegetable Oil from Spain, two packs of brown biscuits, a sachet of strawberry jam and a set of accessories. The latter included a small wooden spoon, two salt sachets, a pepper sachet, a cleansing wipe in a foil sachet, a serviette and a white card stiffener. Most older British soldiers will recognise the dreaded Biscuits Brown in their green foil packaging which were, some claimed, issued as a last resort missile to knock out enemy troops at ten paces if ammo was running low. If you’ve eaten these you’ll know what I mean.

My Lunch bag consisted of Chicken Curry, Cooked Rice and Date Pudding, all in retort pouches, plus a similar accessory set to the one in the Breakfast bag. Both the curry and pudding, in their silver pouches, looked very much like items I remember from British ration packs I consumed in the Balkans in the late nineties. The HOT PACK and bubble pack insulated envelope were intended for heating the curry and rice pouches – only 40ml of water was needed to activate the flameless ration heater and, if instructions were followed, the contents should have heated up inside the envelope in twelve minutes.

Dinner was a less substantial meal than Lunch and in my case consisted of Pasta Rigatoni in a silver retort pouch, a white sachet of Golden Vegetable Soup for which 300ml of water was required, and another accessory set. The individual 140g easy-open can of Tinned Fruit, complete with tiny plastic spoon attached to the lid, was intended as dessert.

Finally, the Loose Items bag, which contained chicken flavoured fast-prepared Noodles from a Malaysian supplier, a silver sachet of Orange Powder from a Danish supplier which required a litre of water to reconstitute, two branded Tea Bags from a Scottish supplier, two white sachets of Instant Tea, a silver sachet containing Boiled Sweets and four white sachets of sugar. Unlike the three meal bags, the resealable Loose Items bag did not have an English / Arabic contents label on the outside.

The French TRANSIMEX set intended to heat this evening meal and boil water to reconstitute the soup included a fold-up cooker, six fuel tablets in a blister pack, a white box containing a dozen matches and a metal handle for lifting French ration tins (not required).

Although this Omani ration pack was clearly assembled for both Arab taste buds and the Halal requirements of followers of Islam it would also be palatable to most British troops, though Americans used to more bland MREs might not find it quite to their taste. Quality appeared second to none and expense has not been spared on the contents, which in my book put it at the top of the list for early Twenty-first Century rations packs.

Regrettably this pack only had an eighteen month shelf life, which expired December 2004, so I did not have the courage to taste test it. However as I am reasonably sure of which company put it together and the off-the-shelf items were from good suppliers, I am quite confident that in its day it would have been very enjoyable.

Footnote: The current COVID-19 pandemic has both curtailed the spring 2020 exercise season and clipped our wings meaning it will most likely be some time before Carl or myself are able to source any new ration packs in the field. However as there are still a few ration topics I sampled, photographed and wrote about before we created this website I plan to delve back into my archives to tide this section over until hopefully some degree of normality returns.