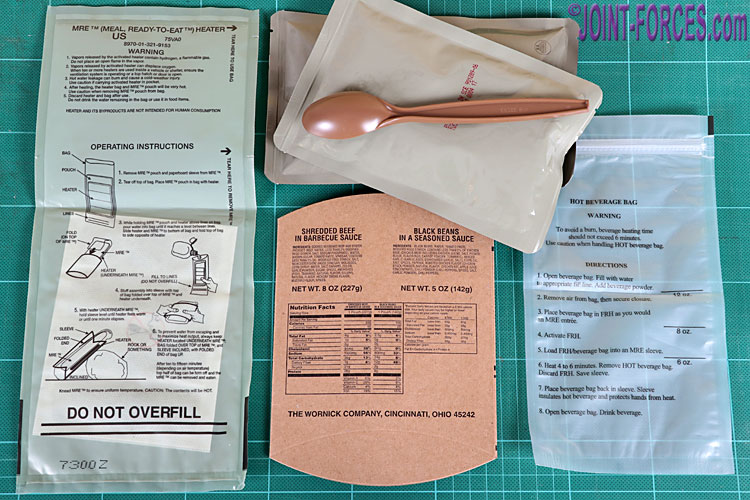 The FRH is specifically configured to heat up retort pouches, i.e. laminated foil and plastic sealed sleeves containing pre-cooked and sterilised wet foods, rather than canned or freeze-dried foodstuffs found in non-MRE styles of ration pack.

First introduced in US military MRE (Meal Ready-to-Eat) packs just before the start of the 1991 Gulf War, and twice updated since, the Flameless Ration Heater consists of an exothermic chemical heating pad sealed inside a plastic sleeve which is activated by tearing off the top of the sleeve and adding a small quantity of water. The sealed retort pouch meal is then quickly slipped into the sleeve on top of the heater pad, the top of the sleeve is folder over and the whole lot is slipped inside either the card carton which the retort pouch was supplied in or a separate card sleeve provided for the purpose. The chemical reaction started when the water comes in contact with the mostly powdered magnesium contents of the heater pack quickly heats it up to around boiling point and after several minutes (from eight to twelve, dependent on contents) the meal is heated sufficiently for consumption. In some non-US ration packs a separate resealable heater bag is included instead of a card sleeve.

Although the basic powdered magnesium process is patented, there are several commercial brands of FRH available and also a similar system which uses different oxidising chemicals, but each works on the same principle and many nations who use retort pouch meals in their military rations packs provide this type of flameless heating. Alternatively some nations, such as the UK for example, primarily expect their troops to use field cookers to boil retort pouch meals in the bag in a mess tin or canteen cup over fuel tablets, which has advantages in that the heating water can be used to brew tea or coffee, but even these countries occasionally supply an FRH for specific types of meal; in the case of the UK, the 12-hour Operational Ration Pack springs to mind.

Full instructions on how to use an FRH are usually printed on one face of the outer sleeve, often in at least two languages, along with simple diagrams to illustrate the process. Note that while the meal is being heated the sleeve and contents should be propped at an angle to stop the activating water running out and this chemically contaminated water should NOT be used to make a drink afterwards. However a resealable Beverage Bag can be used to warm drinks inside the FRH pouch once the mail meal has been heated. The instructions also advise against using several heaters in an enclosed space, as hydrogen gas is produced during the chemical reaction, and there is a warning that the heater pad and any excess water become very hot during the process and this can result in burns if care is not taken. Unlike hexamine tablet fuel however, ration packs containing an FRH can safely be transported by air so long as the outer pouch is kept sealed for the duration of the flight.

I very occasionally use an FRH when reviewing combat rations for this website, especially if it is a new type or an upgraded version, but on the whole I usually just boil-in-the-bag and store the unopened heaters in a sealed container (former ammo box) for possible future emergency use as they are handy things to have around… just in case.