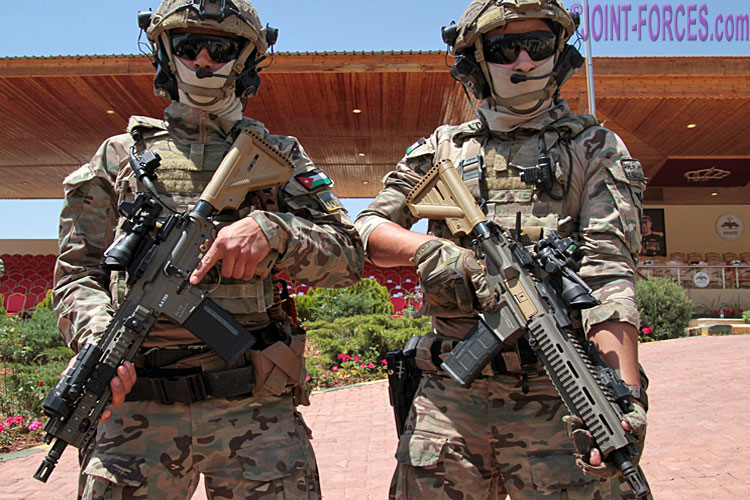 The Arab Ready Meals company, as we have seen, was founded as a Jordanian-Malaysian joint venture to manufacture combat rations in Jordan for Arab armies, writes Bob Morrison.

For five years, from around the same time that these ration packs were first issued to the Jordanian Armed Forces in 2012 through to the company’s last attendance at the biennial DSEI expo in London in the late summer of 2017, I kept a close eye on how the company and its product lines were faring, but at the SOFEX 2018 expo in Jordan their presence was not as prominent as in previous years.

At what I suspect may have been the peak of its production, around 2015/6, ARM (Arab Ready Meals) was manufacturing / packing both 24-hour bagged Operational Ration Packs, in tough plastic olive or tan outers, and lower calorific basic daily ration packs in plain white cardboard cartons. Unlike the ARM ORP, which provided around 3,600kcal and all the accessories needed to feed a soldier for a full combat day, the smaller boxed meals provided just between 1520 and 1570kcal apiece and were intended to be supplemented by locally sourced bread and fruit, though they still included two main meal pouches plus hummus and biscuits for breakfast and a basic brew kit.

While out in Amman at SOFEX ’16, the Special Operations Forces Expo, I was given one of each of the three meal boxes (Menus A, B & C) which I was given to understand were at that time on issue to members of the Jordanian Armed Forces when undertaking routine duties and patrols away from their garrison and their regular messing facilities. I was informed that the larger bagged 24-hour rations were for issue to operationally deployed units, including elite Special Operations Forces, when working or training in the field for several days or longer. Although I have never actually witnessed JAF personnel being issued with the boxed meals covered here, I have seen photographs taken by Jordanian Army photographers I have worked alongside where these cartons were being distributed to troops in the field.

As the bagged ARM 24-hour packs were essentially just expanded versions of the 1500kcal rations, with more meal pouches and drinks components, in this article I am concentrating primarily on the white carton ration contents which I have tasted tested (and really enjoyed). The two main meal pouches in each carton provided between 412kcal and 590kcal apiece and the third pouch, which contained hummus, provided 234kcal. Each of the three Menu cartons also contained a pack of 24 salted crackers, produced by United Food Industries in Saudi Arabia, on which the hummus could be spread if fresh bread was unavailable.

Four different retort pouch main dishes were produced, namely Biryani, Kabseh, Maqloobeh and Freekeh; for those unfamiliar with Middle east cuisine, the first three are traditional meat and rice dishes and the fourth is chicken with green durum wheat instead of rice. Until the 2015/6 production batch at least, the amount of good quality meat, either chicken or beef, in the Arab Ready Meal pouches produced for supply to Jordanian Armed Forces was second to none and the subtle use of herbs and spices made them really tasty. In contrast, the plain hummus (chick pea paste) was a little bland for my taste buds but mixing in a little Tabasco or Hot Sauce held over from other nations’ rations packs gave it a little bit of a kick.

The brew pack was limited to one or two teabags, dependent on menu, and two sugar sachets were supplied for each bag, though no creamer was included as black tea highly sweetened with sugar or honey is the norm in the Arab world. Accessories with each Menu included at least one plastic spoon or spork, a three-ply tissue serviette and salt and pepper sachets.

From late 2014 ARM made their four Halal-certified main meal pouches widely available on the civilian market, under the akleh commercial brand name, in parts of the Muslim world; something which at the time I stated was testament to their quality and taste. The company also provided Humanitarian Assistance ration packs, in distinctive bright red outer bags, which even include a polystyrene cup and lid for aid recipients who possibly had nothing in the way of possessions but the clothes they stood in.

It had originally been intended that Arab Ready Meals would be marketed to defence ministries throughout the Arab World, and particularly the member nation monarchies of the Gulf Cooperation Council which Jordan had been invited to join in 2011 (though subsequent events in the MENA region have slowed down the membership process). In August 2013, as part of their plan to bid for a major forthcoming UAE Armed Forces rations contract, ARM entered into an initial three-year Exclusive Representation Agreement with a support services company based in Abu Dhabi, but the Jordanian-based company was unsuccessful in its bid and Spanish rations producer Jomipsa won the contract with 24-hour ration packs which are very similar to the current German Einmannpackung.

Regrettably SOFEX 2020 was cancelled earlier this year, after extreme rainfall in the region damaged expo site infrastructure – though even if this had not happened the COVID-19 international lockdown would have had the same effect – so it looks like it will be a little bit down the line before I have the chance to further update the Jordanian Arab ready Meals story.