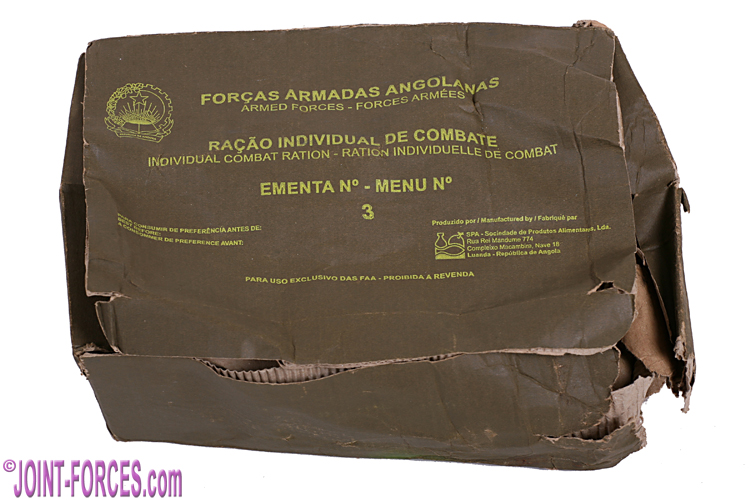 The circa. 2007/9 Angolan ICR carton was olive green thin corrugated card - this one had clearly seen better days [©BM]

In this article I am rolling the clock back at least a decade to look at an old Angolan Ração Individual De Combate or Individual Combat Ration, writes Bob Morrison.

Now that the pace of exercise assignments has eased off a bit for the summer I have time pick up again on the seemingly very popular Combat Rations theme. Whenever possible I try to taste the rations I write about – indeed in some cases I have to taste them as they are the only food available when on assignment – but in this case I drew the line as they were well out of date when I was given them back in 2014 and in their condition it would have been silly to try.

I do not know precisely when this Angolan ICR was issued and as it is unclear whether some of the dates on items are Best Before or Produced On stamps my best guess is that it was packed between 2007 and 2009. It was donated by my old mate Andy of East West Trading, who stumbled across it purely by chance and knew nothing of its provenance but reckoned I would be interested in it. My waistline is probably an indicator that I like all rations, but this one particularly caught my attention through its rarity on the collector scene.

In addition to to foodstuffs the carton contained: a strip of four water purification tablets, sufficient for four litres of water; a box of safety matches; a rudimentary pressed metal tin opener; a pack of ten commercial brand tissues; a plastic bag for refuse; and the menu sheet which had both English and French translations on the reverse. The producer of these rations was given as SPA – Sociedade de Produtos Alimentares of Luanda, though I now believe they may have been produced in Spain for this Angolan distributor.

Although I did not taste the contents and so cannot vouch for their quality, outwardly they compared quite favourably with the 24 hour individual combat rations issued by many NATO nations in the early years of this millennium, so my impression is that they were probably perfectly adequate for their intended function. If they were still in date I’d have tried them.

At the FEINDEF military expo in Madrid at the end of May I picked up a current issue Angolan ration pack and I intend looking at this next.