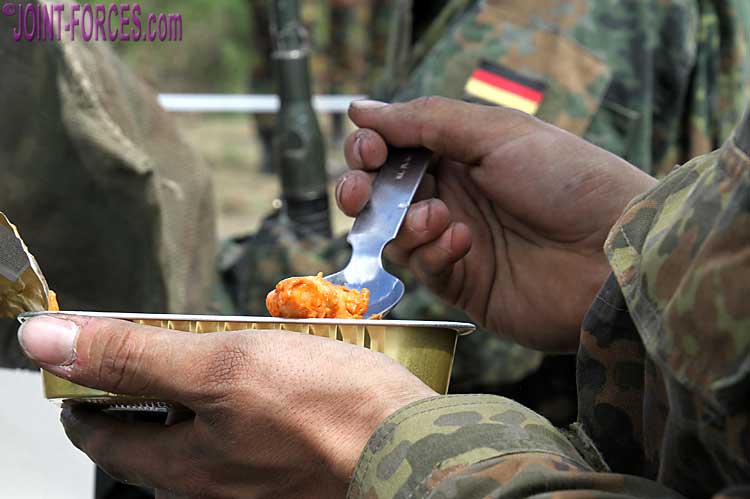 In this second of three articles we look at the Boxed Einmannpackung (One Man Pack) version of the German equivalent of the UK 24-Hour Ration Pack, writes Bob Morrison.

Until a recent supplier change, which has seen boxed ‘wet’ rations like this with main courses in trays being replaced by retort pouches, there were a total of 19 different Einmannpackung (EPa) menus on issue.

Of these 19 menu variations Typ 1 to Typ 9 were boxed and contained foil-topped alloy tray main courses, which required no water to prepare hence being termed ‘wet’, while Typ X to Typ XIX were bagged lower weight and reduced volume packs, which contained freeze-dried components requiring water to reconstitute. The latter (see Field Rations 32) were specifically introduced for use in extreme conditions, such as high mountains, and were originally intended primarily for issue to Elite and Special Forces, whereas the former were general issue and widely distributed on field training exercises.

The boxed ration illustrated here was ‘proffed’ while covering the NATO eFP battle group on Exercise IRON WOLF 17 in Lithuania and photographed for the old Marching Ammo occasional series in COMBAT & SURVIVAL Magazine. Inside the 2015 Packing Date boxed EPa, which was stored and distributed in a brown cardboard carton containing six packs of the same type, could be found: two main courses in alloy trays with foil lids; commercial brand freeze-dried breakfast and dessert pouches; two pots of meat spread; a tin of sliced rye bread; a foil pack of 12 square biscuits; two small pots of fruit jam; snacks and accessories. The ration pack featured here was Type 3, which contained Pea Stew with Smoked Sausages (Erbseneintopf mit Mettwürstchen) and Meatballs with Creamy Noodles (Schupfnudeln mit Sahnesauce und Hackbällchen) as its two main courses; the first is a typical German casseroled sausage dish and the second is possibly best described as meatballs and gnocci in an Italian-style sauce. Breakfast and dessert pouches were Swiss-style muesli and an orange flavoured creamy concoction which reminded me of those instant desserts that became popular around the same time as The Beatles and Formica-topped kitchen tables; both pouches needed water to rehydrate.

The most interesting item in this ration pack was probably the tinned rye bread, which had a ring-pull top and plastic lid to keep the remainder of the half dozen circular slices fresh for the rest of the day once opened. I am not really a fan of rye bread, and especially having tried previous brick-like examples in other rations packs such as Danish and Dutch, but as the tin kept the then current German version quite moist it seemed a little more palatable to someone brought up on sliced white; rye bread is definitely an acquired taste.

The pack of salted biscuits, wrapped in foil and with a protective corrugated card sleeve, were not as hard as some other nation’s biscuits I have taste tested and were tasty enough eaten either on their own or with the ham or chicken spread. I used the jams – one apricot and one currant – on those slices of rye bread over which I did not spread the the sachet of chilli processed cheese. Other snacks included a foil pouch of tuna in lime and pepper dressing (very tasty), two OrifO brand cranberry flavour energy bars, two bars of dark but not too bitter chocolate, small chocolate biscuits and dried sliced banana, both in foil packs.

The hot drinks selection included 2x instant tea, 2x instant coffee, 1x cappuccino, 2x creamer and 4x sugar, with all but the sugar being in foil sachets. The cold drinks selection was four sachets of different flavoured fruit powders from OrifO; the Danish company whose products pop up in many European ration packs these days. Accessories included in each ration pack are: 2x paper towels; 1x moist towelette; 1x book of matches; 12x chewing gum; 2x salt; 4x sterilising tablets; and a contents list with instructions, in German, English and French. According to the list there should also have been a clear zip-top plastic bag for waste but although my carton was sealed there was no sign of this inside.

The EPa had a theoretical shelf life of three and a half years when stored under normal conditions – mine was packed in 2015 with an expiry date of 30 April 2019 – but on the outside of the carton printed notes advise the shorter storage durations for temperatures up to 25C, 39C or 49C. At around 1800 grammes the eight boxed menus were 50% heavier than the four freeze-dried bagged rations, and the square carton was both bulkier and more difficult to stow about one’s kit unless contents were unpacked, but for vehicle-borne troops this is less problematic and not having to reconstitute with fresh water before consumption is a marked advantage.

In the final part of this trilogy I plan to look at the new tan coloured bagged Bundeswehr Einmannpackung which has very different, and quite surprising, contents.