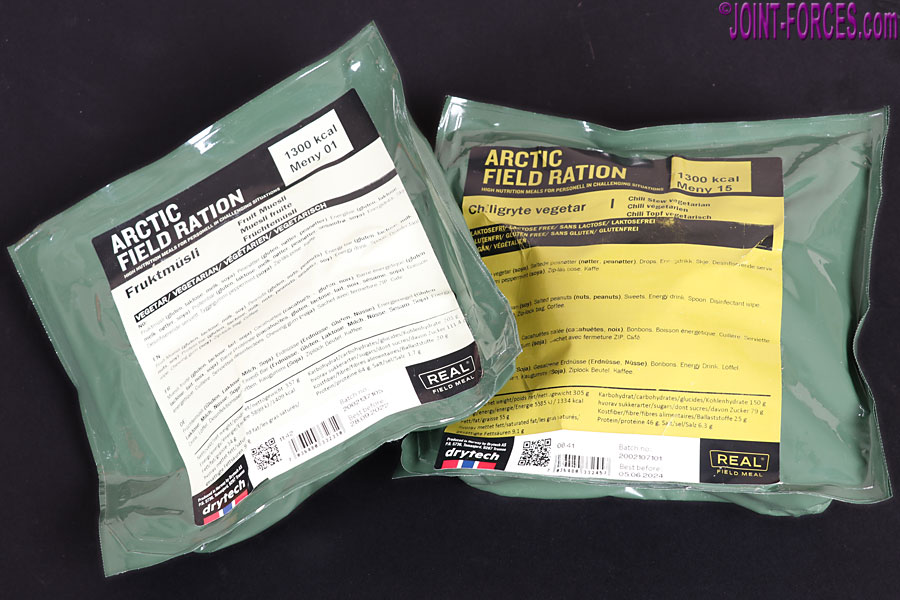 Norwegian Arctic Rations have not really changed since we last covered them about three years ago, as Carl discovered on COLD RESPONSE 2022, writes Bob Morrison.

While there may not have been any major changes to the issue Norwegian Arctic ration packs since both Carl and I ate them on TRIDENT JUNCTURE 2018 and then reviewed them in mid-2019, it is still worth updating readers of this section of our website as the UK’s Commando Forces have been trialling something similar (as announced a few days ago by the Defence Procurement Minister, Jeremy Quin).

Now if I were a betting man, I would put my money on it being these 1300kcal (minimum) individual meal packs produced by Drytech AS of Tromsø which the Commando Force have been testing, as not only did this year’s UK Winter Deployment training exercise and the following COLD RESPONSE field exercise take place almost in the Norwegian company’s backyard but these rations should be available through NSPA, the NATO Support & Procurement Agency. Of course other nutritionally balanced ration packs which are smaller and lighter than the current UK ORP as well as offering higher performance, as required if soldiering in the challenging conditions of the High North, are available and we plan to look at one of these (from PfP nation Sweden, which looks like it may join NATO in the not too distant future) in the next article in this series.

In addition to eating Norwegian rations while covering the 2022 iteration of the Norwegian invitational COLD RESPONSE exercise series, our man Schulze also sent a couple of individual meal packs for yours truly to check out; though the crafty beggar only sent his veggie spares! My being an omnivore means that, unlike certain categories of selective eater who won’t partake of animal products yet will willingly consume the very type of foodstuffs which many creatures rely on for their survival, I am quite content to eat vegetables and grains if necessary (though I am highly suspicious of some artificial formulations and processed concoctions which are passed off as being meat substitutes). Indeed the last time I had a pub lunch I ordered a five-bean chilli jacket potato when my companion went for a beefburger, though if chilli-con-carne had been on the menu I would have probably chosen that out of preference to the beans. But I digress.

Back to the Arctic Field Ration packs themselves. Menu (Meny) 1 contained one freeze-dried Light Meal pouch plus snacks and accessories and Menu (Meny) 15 contained one freeze-dried Main Meal pouch plus snacks and accessories. Both meal packs, Fruit Muesli (Fruktmüsli) and Chilli Stew Vegetarian (Chiligryte Vegetar) produced 700kcal when reconstituted with water. There is a fill line on the outside of each REAL Field Meal (the Drytech civilian meal pouch equivalents are branded REAL Turmat) to help the user get the right amount of water when reconstituting and there is a zip lock to prevent the contents leaking out while the meal is standing for the required number of minutes, as shown in a symbol in the top tear-off strip. The Main Meal needed water between 70°C and 100°C, stirred well before allowing to stand, but cold or hot water could be used for the Light Meal, i.e. breakfast; I opted for hot. So long as you get right into the corners when initially stirring and you give another good stir at the end of the allotted time, Drytech freeze-dried meals do not suffer from the ‘grittiness’ sometimes experienced with some lower quality lyophilised brands.

For snacking, both meals contained a 50g foil pack of Roasted & Salted Peanuts imported from Thailand by Danish ration component supplier OrifO and Menu 1 (a Light Meal or Breakfast) also contained a 40g REAL brand Caramel Energy Bar and Cranberry Protein Bar. In addition to the peanuts, Menu 15 had a 50g pouch of Norwegian commercial brand lemon drops. If not soldiering in Arctic conditions, where more energy than normal is required to compensate for the extreme cold, a Light Meal split across breakfast and lunch with a Main Meal for the evening could well be enough to last a full day as this combination provides 2600kcal.

In addition to meal and snacks, both Menus 1 and 15 also contained: a freeze-dried Energy Drink pouch; a sachet of Colombian instant coffee, but no sugar or creamer; REAL brand chewing gum; a plastic spoon, a disinfectant wipe; and a zip-lock bag for waste. The green plastic outer packs have an easy to open seal and the cover label gives contents and nutritional info in Norwegian, English, French and German. Menu 1 had a net weight of just 357g but produced a theoretical 1409kcal if all edible components were consumed, and Menu 15 had a net weight of just 305g and produced a theoretical 1334kcal. Of course a good quantity of fresh water is required to reconstitute freeze-dried meals like these, but water (never melt yellow snow!) is usually the one thing found in abundance in the High North.

Final words on the taste side. I really enjoyed the fruit muesli, the energy and protein bars and the peanuts. The veggie chilli stew was hearty and filling, though lacking the spicy kick I would have expected, but I would have preferred if it had been all-bean rather that a 40/20% bean and soy protein mix as the texture of the soy was not really to my liking.