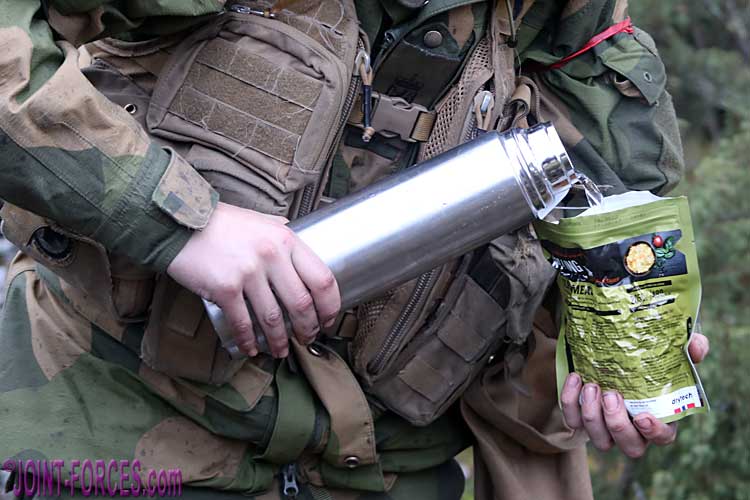 In this article, having previously covered 2005 and 2011 packs, we bring the Norwegian Rations story forward to the present day, writes Bob Morrison.

Norwegian company Drytech AS of Troms, which celebrates its 30th birthday this year, is not only a manufacturer of freeze-dried meals and drinks for the civilian market but it has also supplied complete ration packs to the Norwegian Armed Forces (starting with the FSR 2000) and emergency services since pretty much the start of this millennium. The company’s REAL Food range of freeze-dried meals is widely available on the commercial market and is a firm favourite with those undertaking expeditions where weight is at a premium and with the civilian hiking and trekking community (indeed our man Gormley swears by them).

While out in Norway last winter covering Ex TRIDENT JUNCTURE 2018, not only did I have the chance to ask both Norwegian and Allied troops what their opinions were on Drytech’s meal pouches, but at the Distinguished Visitors Day near Trondheim I was also able to chat to two of the company’s representatives covering the military sales and logistics side. Naturally, in addition to sampling REAL food in the field whenever the opportunity arose, I also proffed samples including a complete standard 1300kcal Arctic Field Ration (an enhanced 2000kcal version is produced for those operating under more severe conditions) and I have now ‘taken one for the team’ by taste-testing it.

Having said that, please don’t think there was anything wrong with this Lunch/Dinner ration pack (far from it) but my hosts were insistent that I taste test the modern version of one of their national dishes which is the main component of M16 and I felt it would be rude to refuse. Torsk i Kremet Karrisaus, or Cod in Creamy Curry Sauce, is basically a creamy cod, potato and carrot stew with a light curry touch. My problem is that, although I could cheerfully exist on just curries, I am not really a fish lover (a long story going back to childhood). Of course the traditional Norwegian diet relies heavily on cod and salmon, so it is unsurprising that the Army’s field rations contain some fishy dishes, but fortunately for me the majority are meat dishes so I enjoyed those meals I ate out on the ground in Norway.

Similar in concept to the US MRE, the Arctic Field Ration is a single meal pouch but these can be issued in strips of three, with a perforated tear line between each, to give a 24-hour ration pack covering Breakfast, Lunch and Dinner. Three pouches have a combined weight of around 900g, which is about half that of most rations with canned or retort pouch meal components, but of course this weight difference has to be made up with fresh water to reconstitute the meals. In Norway, sources fresh water or snow are pretty much always close to hand so this is not an issue, but in temperate or arid operating theatres the soldier would always need to carry extra drinking water as freeze-dried rations cannot be eaten straight from the container in the same way as canned or retort pouch foods can, even when cold.

Turning now to my Drytech REAL M16 Arctic Field Ration, packed January 2018 but with a best before date of November 2020 even though the freeze-dried main meal has an individual BBE date of of January 2025, the vacuum-sealed dark outer pouch measured 210x 190x 50mm and with the edges folded in it fitted a combat jacket lower front pocket. The outer, flat, front face of the pouch peeled back to reveal the contents and the large peel-off contents label (in English, French and Norwegian) on the front doubled as a reseal panel; underneath the peel-off label on my pack there was an English language nutrition advice label but I suspect this might have been because hundreds of thousands of Drytech REAL rations were issued to multinational troops deployed on TRIDENT JUNCTURE 2018.

The contents of my ration pack were: freeze-dried Cod in Creamy Curry Sauce; Beef Snack, Chilli & Garlic Jerky; Cranberry Protein Bar; Oat Biscuits, in pack of six; Nut Spread, for biscuits; Energy Drink, powdered; Hot Chocolate, powdered; Colombian Coffee, powdered; Chewing Gum; Plastic Spoon; Disinfectant Wipe; and a zip-locking plastic bag for waste. All edible components were high quality, as we have come to expect from Drytech, and although the Cod & Potato dish was not really to my personal taste, and the curry flavouring was blander than I would have preferred, it actually made for a hearty meal and I finished it all.

When in Norway last November I sampled several different main meal pouches, reconstituted with hot but not quite boiling water, and I enjoyed them all. The Lamb Mulligatawny, Chicken Tikka Masala and Chilli con Carne were all very much to my personal taste, but the more traditional Lapskaus (Beef & Potato Stew) was also a tasty and hearty meal. I took a sample of the latter with me back in February when enjoying my first amble of the year along a stretch the Jurassic Coast and you can see what it looks like reconstituted by clicking here.

If looking for Drytech meals on the civvy market, watch out for brightly packaged REAL TURMAT or REAL ON THE GO brand displays at good outdoor kit shops.