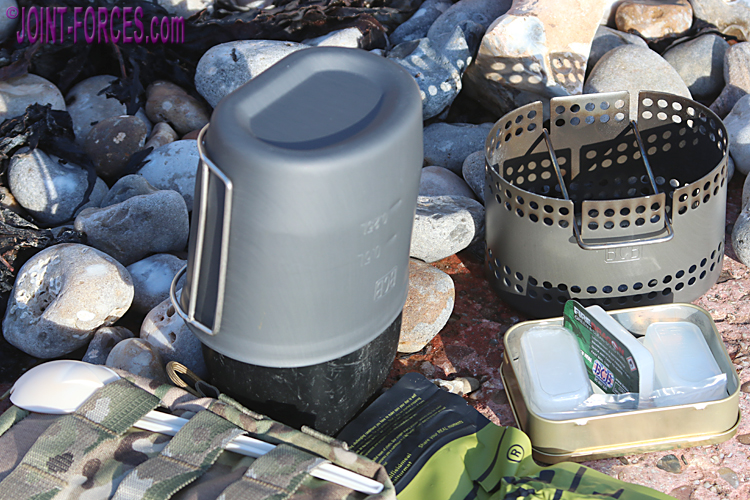 Throughout the last decade I have consistently used the Crusader Dragon range of fuel tablet cookers and canteen cups to heat ration packs in the field, writes Bob Morrison.

These days I don’t get out in the field quite as much as I used to do twenty or thirty years ago, back when the UK MoD was more interested in facilitating media visits to troops on exercise or deployment than writing the story themselves and hoping lazy or cash-strapped news desk editors might just reprint verbatim, but I do still like to get out in the open air whenever the occasion arises and if I do get away from the desk I often take a field cooker, canteen/bottle of water and drinking cup with me to allow me to whip up a meal and a brew/wet at lunchtime; yes, we really do try out the rations featured on JOINT-FORCES.com.

A couple of weeks into a bout of illness brought on by my venturing onto rush hour public transport in London for several days in January, and before I headed out to cover IDEX in the UAE, I felt sufficiently better to grab a few hours off to stroll by the sea in bright sunshine in East Devon and take in the ozone. As I am also working on a feature on Norwegian freeze-dried rations at the moment, guess what I took along with me for an al fresco lunch.

FireDragon fuel tablet sits in a cup in the base [© BM]

To reconstitute my ration pouch I took my old faithful Crusader Dragon Mk.2 Cooker, a high grade aluminium alloy multi-fuel field cooker conceived for use with BCB FireDragon gel and tablet fuel, which has a cup in the base to hold the fuel, a rack to stand the cooking cup on top of, and perforations around the lower and upper sides to ensure a decent burn. Weighing around 150g (5.25oz) and measuring just 125x110x85mm, the cooker will nest on the bottom of a standard NATO kidney-shaped water bottle/canteen and will only take up about 15mm more space than a conventional canteen and cup. As FireDragon tablets, also manufactured by BCB, almost always ignite at the first bright spark or touch of the match – even when wet – and as the cooker design ensures a clean burn in even the windiest of conditions, I cannot think of a better way of heating rations with fuel tablets.

The Crusader Dragon Cup Mk.2 is a deeper version of the standard cup which fits on the NATO water bottle, and it too fits snugly atop the bottle. Like the cooker also manufactured from high grade aluminium alloy, it is one litre in volume with useful indentations marking the 250cc and 500cc levels. Measuring 150x115x100mm and weighing a fraction over 200g, this sturdy shaped cup also has a fold-out two-piece handle on the back. In the past a neat cover was also produced to keep heat in while water was brought to the boil, but unfortunately I have lost mine and these lids are currently out of stock; however when out in Abu Dhabi at IDEX we were shown the next generation of lid and given details of the forthcoming Dragon Cup Mk.3 which is currently in development.

The ration pack I recently reconstituted by adding boiling water heated in the Crusader Dragon Cup over the Crusader Dragon Cooker (both Mk.2 versions) with a FireDragon fuel tablet was a Norwegian REAL Meal Lapskaus (Beef & Potato Stew) from Drytech. Generating 600kcal after about 400mm of boiling water is added, stirred in, and left to reconstitute for about ten minutes, this proved to be a very hearty meal. To the remainder of my heated water I added a sachet of coffee powder to wash down the stew. Sorted.

To check out the various cookers, cups and cooking sets available by mail order from BCB go to bcbadventure.com/product-category/cooking/cooking-sets/ or if you have a good quality camping store nearby check out the BCB Adventure display stands. My original Crusader Mess Tin, Cup and Cooker from around 2010 [© BM]