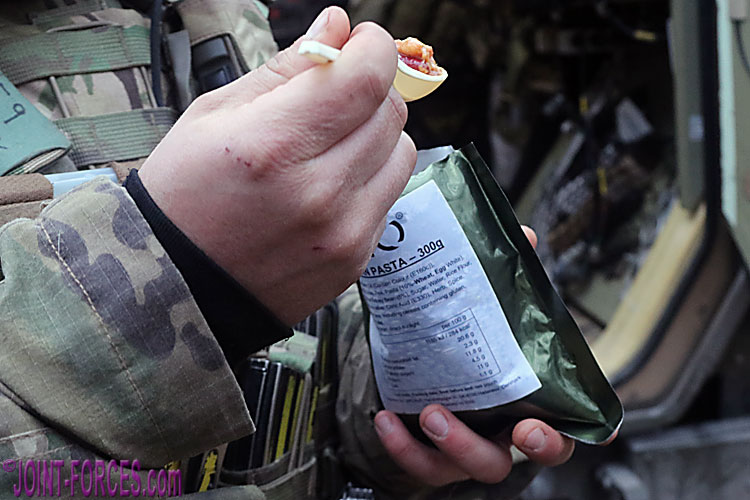 The UK 24-hour Operational Ration Pack (ORP) illustrated here, which I was given earlier this year and photographed before going out to Norway, was packed in June 2017 – the Menu Number sticker on the end panel is 24PD0617 – but all those ORP cartons I spotted on issue to the forward elements of 4 [UK] Multi-National Brigade were from a batch packed just one month later. To ensure I had an up-to-date contents list I sought permission to take Box Menu Sheets from two discarded empty 10-pack outer cartons and this was granted.

If you have been following this mini-series on UK ratpacks you will notice that not a lot has really changed since 2013, by which point lessons learned from several years of operational experience in Iraq (Op TELIC) and Afghanistan (Op HERRICK) had been addressed. Changes in the 21st Century soldiers’ palate, which had become more cosmopolitan than that of previous generations, had also filtered through meaning that on the whole Brit rations are now pretty widely regarded by other armies as being right up there at the top.

The only minor comment I have to make on the 2017 ORP is that the choice appears to be a little wider than before and the only difference I spotted this time around was that one Menu (No.1 and No.11) in each carton of ten is specifically designated as being Vegetarian. There is, of course, a dedicated 10-ORP all-Vegetarian carton option for those who do not eat meat but having one veggie meal in each ordinary 10-pack must help a bit on the logistics side for short deployments; of course there is nothing to prevent omnivores eating, and even enjoying, the occasional meat-free ration but having no dedicated vegetarian menu available in a 10-pack could be seen as an issue for those who choose not to eat meat, or whose religion might prohibit it.

Stack of ORP contents straight out the box [©BM]

As previously, the individual 2017 Pack Date ORP is broken down into Breakfast, Main Meal, Snacks, Drinks and Accessories (listed as Common Components as the Brew/Wet Kit is included here). All items are packed in a single brown cardboard carton, with the cooker and fuel separately issued, though the Common Components include five wind/waterproof matches and a striker strip.

The Main Meal selection includes a Starter, Main Course and Dessert plus a bottle of Hot Pepper Sauce for those who want to spice things up a bit. The 20 Starters include: 4x Bean & Pasta Salad; 1x Lamb Rogan Josh; 3x Mexican Tuna with Pasta; 3x Moroccan Style Bean Stew; 3x Thai Style Chicken Soup; 2x Tomato & Pasta Salad; 3x Tuna Bean Pasta; and 1x Vegetable Korma. My Menu 6 option was Tomato & Pasta Salad and in my opinion it was very tasty when eaten heated, though I suspect it would also taste good if eaten cold and I reckon adding the Hot Diggidy Dog to it if eating cold would warm you up nicely.

There is less choice when it comes to Desserts, with twelve of the twenty packs containing a Fruit Turnover (Apple x4, Cherry x4 or Blueberry x4). The other eight packs contain either Mince Pie (x3) or Ginger Pudding & Ginger Sauce (x3) or Sticky Toffee Pudding (x2). I have come across that Ginger Pudding dessert before, most recently in the 2015 Halal ORP, and I did not go a bundle on the texture, but this time the pudding contained in my Menu 6 was actually much better so maybe those DE&S Feedback Forms actually work.

There are between four and seven individual items supplied in the Snacks section of each of the twenty Menu options and choice is again quite varied. Fifteen of the packs have a fruit purée squeezy bottle, in one of several different flavours, with four of the others having packs of sweets (Boiled or Cola) and the last having a pouch of Tuna in Light Mayonnaise. Each pack usually also has biscuits or an oatmeal block plus at least one cereal bar as well as usually a pack of nuts or dried fruit or fruit & nut mix; there is the odd pack that doesn’t have one or other of these but will have a Tuna pouch instead. Occasionally Jam or Peanut Butter is included to balance the calorific value where necessary.

Five drinks powders are included in each pack [©BM]

On the Drinks side, five sachets are included in each Menu with one being Fortified, one being Hot Chocolate and the other three being Fruit flavoured; again there is quite a bit of variety and even the Hot Chocolate powder comes in three different flavours (Regular, Mint and Orange). As previously mentioned, Coffee Powder x2 and Tea Bags x2 are also provided along with Sugar x4 and Beverage Whitener x4 – the latter are Common Components along with Water Purification tablets, Chewing Gum, Wet Wipes x2, a pack of Tissues, a plastic Spork and a Re-useable [sic] Polybag for collecting rubbish and empties. All-in-all, the British ORP of 2017 is pretty comprehensive and, in my opinion, a lot better than the offerings many other nations provide their troops with in the field.

Footnote: I have previously mentioned the alternative Cold Climate Ration issued to troops on Winter Deployments in Norway and some might be wondering why the CCR was not used on the recent Ex TRIDENT JUNCTURE 18. When I asked this question, a 1 LANCS officer explained that as the exercise took place in late autumn, when fresh snow for melting could not be guaranteed and when the temperature was not expected to be as low as encountered in the depth of winter, it was decided that the logistics of providing and carrying sufficient clean water to reconstitute freeze-dried meals would be an unnecessary burden for 4 Infantry Brigade troops operating in the field as Light Role Infantry. I reckon somebody in planning got that decision spot-on, as the recent unseasonably mild weather we have enjoyed in the UK also affected Norway and muddy slush was more in evidence than virgin snow during the TRJE18 LIVEX phase. Common Components atop the reusable polythene bag for rubbish [©BM]