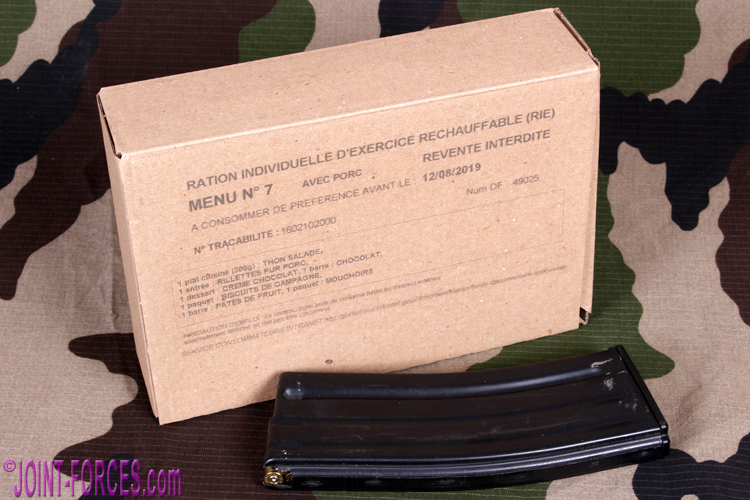 In this third article on French ration packs we are looking at the Ration Individuelle D’Exercice Rechauffable (RIE) or Individual Reheatable Exercise Ration, writes Bob Morrison.

As its name suggests, this RIE pack is primarily intended for issue to troops on exercise but, although it contains the word reheatable in its title, this particular ration is actually intended to be eaten unheated; the two other menu options I have seen also included a ‘consommer froid’ (consume cold) main course item.

Measuring roughly 225x155x60mm (9x6x2.25”) this cellophane wrapped brown cardboard carton, with contents and notes printed on the lid, is a single meal ration which generates around 950kcal of energy when all consumable items are eaten; the pork rillettes and chocolate bar do not have calorific values printed on them so I have guestimated the total. There are seven items in the carton, all commercial brands, and all but the pack of tissues are edible – there are no accessories such as eating utensils and seasoning sachets, plus no brew kit is included.

Starter, main course and dessert are all tinned – biscuit packs have been taken out the box [© BM]

The three tinned components are a starter, main and dessert (or plat cuisiné, entrée and dessert in French) plus there are two wrapped snacks and a box of biscuits. In my Menu No.7 the starter was PORC RILLETTES (a fatty shredded pork pâté), the main course was THON SALADE or Tuna Salad, and the dessert was CRÈME CHOCOLAT or chocolate mousse. All cans are manufactured from lightweight alloy and have ring-pull opening.

The small box contained four BISCUITS DE CAMPAGNE, or Army Biscuits, in pairs inside cellophane wrappers; all were salted in my ration pack but savoury equivalents, or two of each type, can be found in other menus. The ideal way to eat the rillettes is spread on these biscuits. The two other edible items were a 25g bar of dark chocolate (mine was discoloured, probably on account of the hot summer, but was palatable) and a 30g apricot bar, PÂTE De FRUITS, which reminded me of the jellied fruit sweets of my childhood Christmases.

The French, as most readers should know, tend to put their chefs on pedestals and treat mealtimes with great reverence so you will not be surprised to learn that this one-meal ration pack was full of flavour. The fish dish contained decent chunks of Albacore tuna as well as diced potatoes, green & red peppers and carrots in a tasty dressing, and the pork starter was great spread on the biscuits, though I found the chocolate mousse to be a bit gloopy and sickly.

Next up in this occasional series should be the Spanish Individual Combat Ration or RIC.