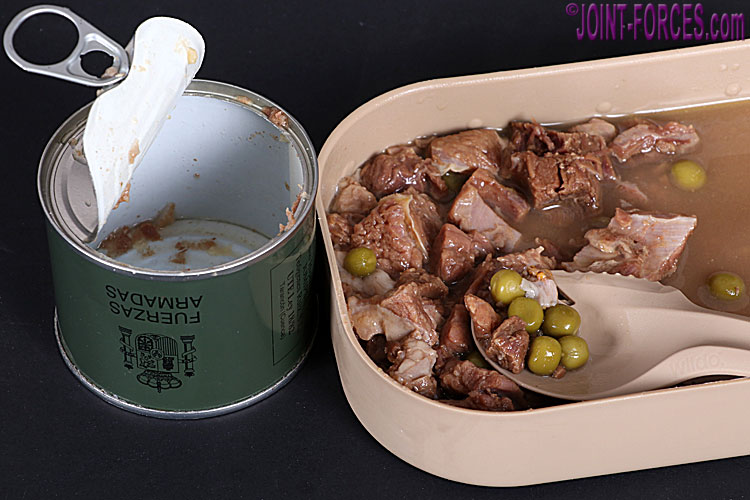 Last night, to break up my dietary monotony a little bit, I concocted an interesting dish using a tin of Carne de Vacuno con Guisantes from a Spanish RIC pack, writes Bob Morrison.

Two decades of editing the now defunct Combat & Survival Magazine, and also contributing sections to some popular Anglo-American books on the Survival topic, left me reasonably well prepared when the current movement restrictions in response to the COVID-19 pandemic kicked in so I haven’t starved… yet!

I have long kept a healthy rotating stock of reserve canned foodstuffs set aside for emergencies, and a month’s supply of water (to be boiled before use) as well, plus I also have a small kitchen worktop freezer which I keep topped up with my favourite meals; with my ‘prepper’ hat on I see little point in having a massive chest freezer as I could not eat all the contents if the power supply died. Years of travelling to foreign, sometimes off-the-beaten-track, locations for work (as well as having a few lady friends of different cultures over the years) have given me quite an adventurous palate so both the ready-made meals in my fridge and freezer plus my occasional batch cooks mean it should be quite some time before I get really bored if the current partial lockdown is extended. Having said that, however, just occasionally I get a hankering for something a little bit different and that is where that little tin more usually found in a Spanish individual ration pack came in handy.

If that pandemic had not messed up my recent travel plans I would have been out in Jordan earlier this month for the Annual Warrior Competition at KASOTC (King Abdullah II Special Operations Center) and while in the Hashemite Kingdom I would no doubt have sampled traditional local fare such as Kabseh and Freekeh etc. as I really enjoy these dishes. While looking last night for an alternative dish to the likes of frozen shop-bought Chicken Jalfrezi or home-made Game Madras my eyes alighted on a small, 200g, tin of Carne de Vacuno con Guisantes which one of the military sales team from Jomipsa, the Spanish combat ration suppliers who produce the current Ración Individual de Combate, gave me at the last defence expo we both attended. A cunning plan formulated in my tiny, Baldrick-like, brain.

Carne de Vacuno con Guisantes, which translates as Beef with Peas, has been one of the staples of Spanish Army rations (Raciones de Previsión) for at least the last quarter century so I hope I am not offending our Iberian readers by suggesting the following; though as Andalucia has a long culinary tradition of Arab fusion dishes I doubt I will. By adding the contents of this heated tin to a 220g sachet of microwaveable ‘5 Whole Grains’ from my emergency rice stash, I reckoned, it should be possible to come up with a tasty and healthy passable substitute for Kabseh. I am pleased to say that the combination worked and I ended up with what I considered to be a delicious meal.

Now if only I had remembered yesterday evening that this is Easter weekend I might have held this one back until Sunday as a treat. I wonder if there are any other ration pack contents that I have set aside for a more opportune time and then forgotten about?