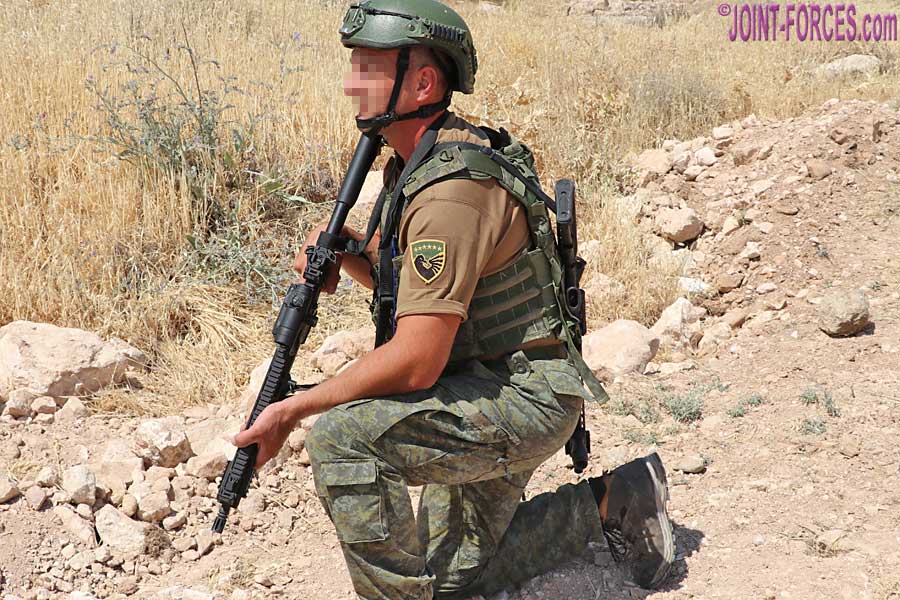 At the recent 12th Annual Warrior Competition I had the opportunity to photograph the M2012 digital camo pattern worn by the Kosovo Security Force, writes Bob Morrison.

Formed in early 2009, following the February 2008 Declaration of Independence and subsequent dissolution of the Kosovo Protection Corps, with the aim of gradually replacing the NATO-led KFOR (Kosovo Force), the Kosovo Security Force (Forca e Sigurisë së Kosovës in Albanian) is currently in the process of transformation into an all-professional Kosovo Armed Forces capable of meeting NATO standards.

Turning now to the M2012 KSF digital / pixellated camo pattern, this is a predominantly horizontal design which is not too dissimilar to the M2008 Turkish three-colour pattern but with the exception of the palette which only uses shades from the green portion of the spectrum; Turkey’s outgoing pattern (being replaced by a pattern somewhat akin to Italian Vegetata) has a russet shade in the mix. Although M2012 KSF only appears to use a light green, a dark green and a khaki or olive drab shade the way the patterns overlap and colours leech gives the impression that their might be a fourth colour in there… but I reckon this is just an optical illusion.

Out in the KASOTC stone quarries on a sunny day in June there is so much reflected light around, not too mention a lot of dust and sand in the air, that up close both the eye and the camera can sometimes be fooled, but I am pretty sure that M2012 KSF is basically just a three-colour pattern. It would have helped if the guys had been wearing their combat shirts without load vests to allow me to both see and photograph a comparatively large panel on somebody’s back, but with the mercury at times nudging 40°C in the shade it is unsurprising they opted for T-shirts instead.

In closing, despite being a comparatively small and fledgling unit, the KSF CAU team finished well inside the top half of the 2022 Warrior Competition final results list, immediately behind the two elite DETSUS 88 AT teams from Indonesia, which meant they were also the third highest ranking European SpecOps team! Nice one guys.