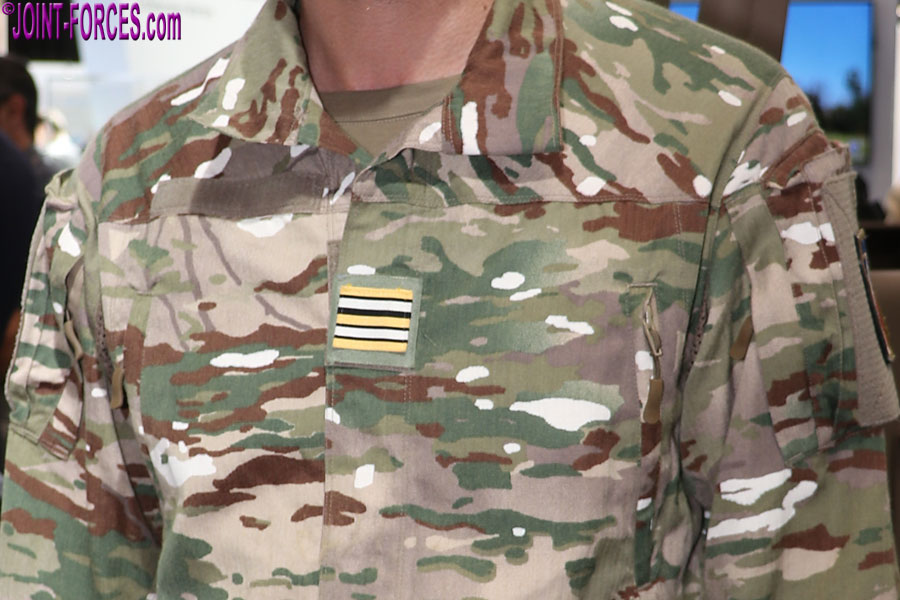 Clearly influenced by the early 21st Century US Army experimental pattern from which both Crye Precision’s commercial MultiCam and the more recent US Army OCP or Operational Camouflage Pattern (aka Scorpion W2) were derived, the new French BME is neither a copy nor a total colour match.

As of yet I have not had an opportunity to see a full-width swatch of this brand new camo, or to compare directly against a large sample of MultiCam, but those uniform examples I was fortunate to be able to snap at Eurosatory 2022 were sufficiently different for me to spot from some distance that they were the new design; having said that, I suspect when worn in the field the new pattern will be quite compatible with MultiCam once dusty and slightly faded by the sun.

Before concentrating on the new camo pattern, let’s look at the description given for the BME Mannequin displayed last week at Eurosatory:-

Now to BME pattern. My initial impression is that this predominantly horizontal design has more dark green in the mix and a slightly redder dark brown shade than the American patterns, but I must emphasise that I both saw and photographed BME under exhibition lighting conditions – i.e. a total mishmash of area and directional lighting with a little bit of natural daylight thrown into the mix. Having said that, the two shots of the combat jacket worn by the Commandant (Major) were taken in near natural light near to a glazed internal courtyard so are probably the best colour representations.

Although BME is a mostly horizontal pattern, rather like the current US OCP or Scorpion W2, there are a small number of more vertical twigs incorporated but unlike the ‘twiglets’ found on Genuine MultiCam these do actually have the appearance of twigs. Curiously, there are also some light coloured triangles in the pattern, which strikes me as being a little strange as isolated triangle shapes do not occur very often in nature. As this uniform will not be rolled out across the Armée de Terre until 2024 it will probably be some time before we get the opportunity to photograph a French soldier alongside another nation’s soldier clad in MultiCam / OCP / MTP etc. but I’m sure the different patterns will be compatible. Incidentally, a new French Mountain Warfare camo pattern is also being introduced circa. 2025/6, but that’s a story for another day.

Finally, a word on the new French Army boots. The coyote tan Chaussure de Combat Zone Tempérée or CCZT model is now replacing the brown 2014 Chaussure de Combat Centre Europe or CdCCE model. Both of these boots, the older model being a version of the Nepal PRO, are manufactured by HAIX and once I receive a spec sheet from Mainburg I’ll pen a brief article on the new boot in our Footwear section.