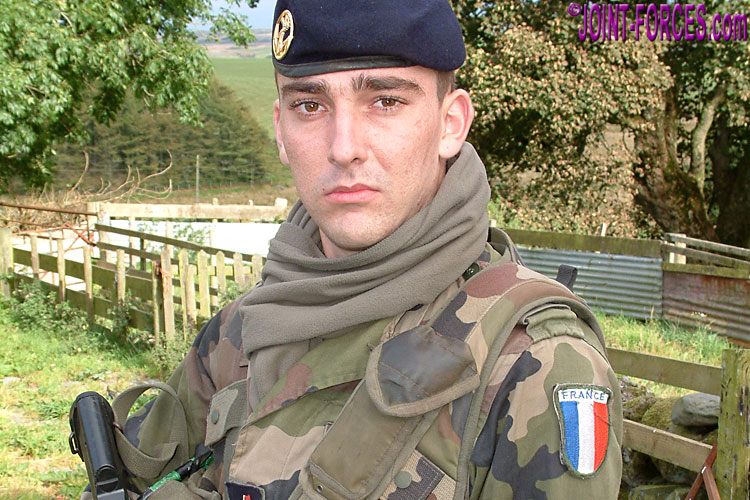 By way of background, following the recent introduction by the French MoD of new combat suits, comprising matching shirt / jacket and trousers, in the standard M1991 Centre Europe or Central European camouflage pattern we took a look at 2nd generation garments (see French Central European Camo Combat Suits) which have now appeared on the surplus scene.

The JOINT-FORCES reader who prompted this follow-up thanked me for outlining some of the differences between the two sets but said it was a pity there were no images to compare. That set me thinking (thanks for the memory-jog, Jon) and a subsequent trawl of my archives over the last couple of days turned out both a four-view set of images of a Marine Infantry NCO from 21e RIMa, taken during Exercise NORTHERN LIGHT 2003 in Scotland, and some detail photos of a surplus uniform shot on a model in 2006. In both cases the subjects were wearing first generation temperate theatre CE pattern garments, easily recognisable by the press stud pocket flap and cuff fasteners and the lack of upper sleeve pockets.

In the above photographs the combat shirt is worn outside the trousers but tucked back inside itself with the elasticated hem drawing it in above the hips. Note also how the trousers have no hip pockets and the hems are elasticated. As a front-fastening COP-style vest, rather than a body armour plate carrier is worn, the chest pockets can still be accessed.

Talking about the above garments in 2006 I noted: “The shirt is of simple five-button front fastening style, with a sixth button at the throat to allow it to be fastened right up to the neck in cold weather. There is also a separate gusset of cloth inside, which fastens to an internal button, for parade ground neatness when the shirt is worn with the throat button undone. The buttons themselves are large and dark green, of four hole design attached by cotton thread, and they are concealed between two layers of the overlap. At the bottom of the front opening is a velcro-style fastener to hold the hem neatly closed. Chest pockets are comparatively small, accessed by vertical zips, and there are neither internal pockets nor external lower cargo pockets. The hem is elasticated at both sides to give a snug fit, and the shirt can be worn tucked into the trouser waistband in cold weather, or worn over in warmer weather. The sleeve cuffs are fastened by two-position press studs, there is velcro-style felt for name tab on right chest, rank tab in the centre and national tricolour on left upper arm, plus there are shoulder tabs fastened by a single small green button.” At that time I stated we had two similar shirts in the collection, bought twelve months apart, which had labels dated 1996.

Regarding the trousers, I noted they “are of zip fly, single button fastening type, with six belt loops and neither waist adjuster tabs nor braces buttons, so really need to be worn with a 45mm belt. There are standard slant pockets each side, plus half bellows cargo pockets with press stud fastening cover flaps on each thigh, but no hip pockets. Hems are cut short and elasticated to allow them to rest above high leg combat boots.” I also highlighted that labels on the two pairs we had gave date of manufacture as 1996 and 1997 and said “incidentally, Spanish as well as French manufacturers have won contracts to supply these garments, so don’t be surprised to see Madrid on some labels.”