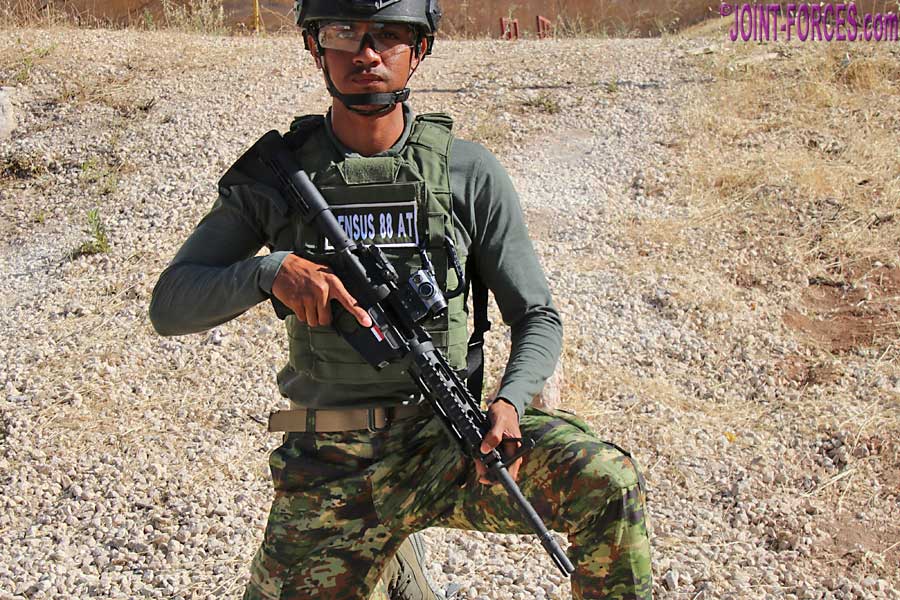 Indonesia’s Detasemen Khusus 88 Antiteror or DENSUS 88 AT is a Police Counter-Terrorism Force formed in direct response to the 2002 Bali bombings, which killed over two hundred people from more than twenty countries. Two teams from this elite unit participated in the 12th ANNUAL WARRIOR COMPETITION at KASOTC (King Abdullah II Special Operations Training Center) this June, and while one of the teams was waiting to take their turn at the Airbus take-down event one of them was volunteered by the Team Leader to quickly pose for our Kit & Camo section.

The camouflage pattern uniform that Detachment 88 wears is unique to them and has the unit’s Owl’s Head logo discretely incorporated, though you have to look very closely to see it. During WARRIOR COMPETITION the teams only wore their distinctive camo patterns combat shirts on Day One, unsurprisingly peeling down to long-sleeved T-shirts from Day Two as the thermometer seldom dropped below 35°C once the sun arose, but they wore their camo pattern combat trousers throughout the rest of the week. It was a little disappointing that I would not have another chance to photograph the shirts, especially as I was unable to snap a back panel for the key photo, but at least I was able to photograph what I think is a reasonable representation of the colour variations in the shot showing either side of the side seam around the left pocket on one team member’s trousers.

Some camo collector commentators, possibly working just from photos rather than having seen garments up close, have stated that DENSUS 88 pattern is a MultiCam derivative, but I disagree on this. MultiCam is, after all, itself a derivative of the experimental US Army ‘Scorpion’ pattern developed at the beginning of the 21st Century and that prototype pattern drew on both the lessons learned from preceding camouflage used in the second half of the 20th Century, mostly derived from WWII German and post-WWII US ERDL designs, and the possibility of introducing colour blending made feasible by modern manufacturing processes. In my opinion this six-colour pattern, which is just the latest in a long line of effective camo designs produced in Indonesia, possibly has more in common with German Flecktarn than it does with Crye Precision’s commercial MultiCam pattern – not least because it does not have the blended / sprayed edges which are so obvious on the modern North American camo and its derivatives.

DENSUS 88 is a predominantly horizontal pattern with no straight or near vertical elements, which are the identifiers of MultiCam when compared with Scorpion or the more recent Scorpion W3 pattern now in service as US Army OCP, and although it has a light tan shade as a a tertiary colour it does not have the near-white paint blob and jelly-bean shapes found on MultiCam or OCP. Very much a verdant camouflage, which is unsurprising bearing mind it is intended for wear in The Tropics, it uses three shades of green along with chocolate brown and near-black. Although clearly not a desert pattern, it did not actually fare too badly on those areas of natural vegetation away from the stone quarries inside which most of KASOTC is built. There is actually a small ‘green zone’ out on the ranges, but unfortunately I was unable to photograph the Indonesian teams there to see how their camo worked against that background.

For the next article in this series I plan to take a very brief look at the green pixellated camo worn by the Kosovo team in Jordan.