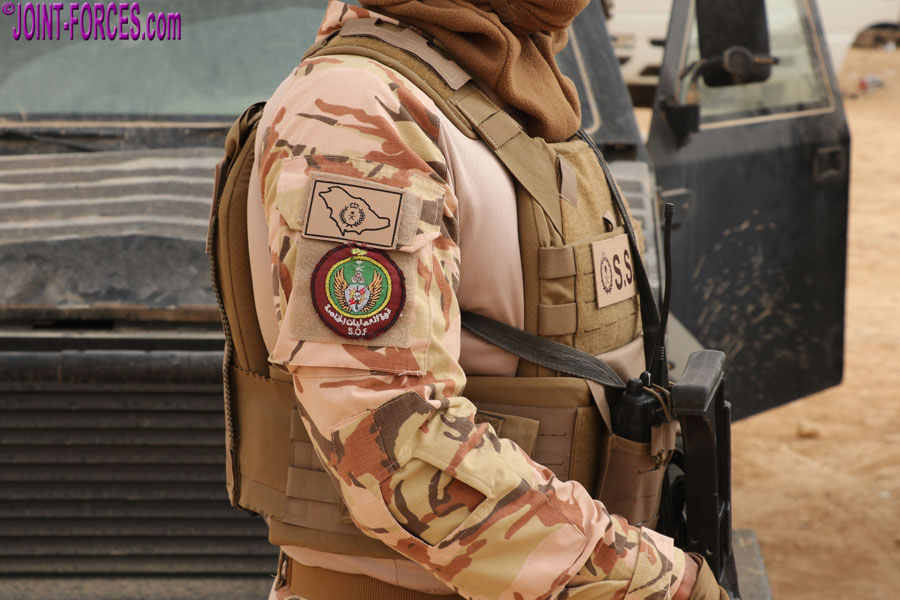 At the recent World Defence Show (WDS 2022) in Saudi Arabia I had the chance to photograph the rarely seen SSF camo and other PSS patterns, writes Bob Morrison.

In 2017 the Kingdom of Saudi Arabia combined its counter-terrorism and domestic intelligence services under a new Presidency of State Security (PSS), bringing the General Investigations Directorate, the Special Security Forces, the Special Emergency Force, Security Aviation, and the National Information Centre under a single command. At WDS I was able to photograph the distinctive camouflage patterns worn by the SSF, SEF and SA.

Clearly a derivative of the classic British DPM (Disruptive Pattern Material) dating from around 1967, the SSF version has some similarities with the original, i.e. first version, Omani Orange DPM colour scheme but the darkest Saudi colour is chocolate brown rather than black and the next darkest colour appears less orange. The light khaki and stone shades are similar, but I must stress that the amount of dust in the atmosphere following a severe sandstorm the night before I took the photos affected how both the camera and the eye perceived colours. It is also worth noting that the pattern is not a duplicate of DPM but an approximate copy and as such the spattered edges are much less defined, plus some individual shapes are incomplete.

Turning now to Security Aviation, the mission of this branch is to: Devote the Command’s aviation services to maintain the country’s national security, in cooperation with other security sectors, and to provide the citizens with humanitarian services such as rescue, search, fire-fighting etc.

It’s Duties are to:

The blue/grey camo uniform worn by SA is another DPM variant, again with less spatter on the edges and some incomplete or partial shapes when compared to the British temperate / Woodland original or the first version orange Omani pattern. In this case the four colours, photographed on a day with much less dust in the atmosphere, are Stone, Blue, Gray and Black. It should be noted that where the blue and grey shapes overlap, rather than dovetail, it looks like a fifth colour has been used and where the grey shapes appear lightly sprayed rather than solid this can give the effect of a sixth colour being used.

The third camo pattern here was worn by a member of the Special Emergency Forces, which is a counter-terrorism unit said to be run along the lines of the French GIGN and, unlike the Special Security Forces which are military in nature, this organisation is more of a law enforcement (police) organisation.

The SEF camo pattern is six-colour with reddish brown, dark grey and khaki on a light stone base with black ‘pebbles’ and earth brown ‘shadows’ around them. This appears to be a derivative of the US ‘Choc Chip’ camo pattern widely used as a desert camo through the 1980s until replaced by US ‘Coffee Stain’ from 1991, but again this is not a direct copy of the original.

It had been my hope to catch up with the Saudi SSF contingent once WDS 2022 commenced properly, and one of the operatives agreed to pose for a four-view when there was more time, but regrettably their main displays were cancelled on account of the bad weather and they did not return to the expo site. Maybe I will get another chance in the future… insha’Allah.